The case concerns a number of alleged contacts between employees of the two airlines over a number of years which the OFT alleges had the object of “coordinating the parties' respective pricing strategies regarding passenger fares through the exchange of commercially sensitive information on pricing and other commercial matters”.

The matter was brought to the OFT's attention by Cathay under the OFT's leniency policy, where a company which is the first to report its participation in cartel conduct may qualify for immunity from penalties. Cathay will be immune from any penalty imposed in this case, “provided it continues to cooperate”, stated the OFT.

Virgin Atlantic stated it would “robustly defend itself against the allegations”, adding it did not believe it had "acted in any way contrary to the interests of consumers".

The Nikkei reports Japan Airlines could miss its 30-Jun-2010 deadline for submitting a rehabilitation plan by up to two months, due to ongoing negotiations with prefectural governments over domestic network cuts scheduled to take effect from late Oct-2010. JAL is aiming to slash its network to stem losses.

Qantas management held crisis talks over the weekend to consider strategies for easing the backlog of passengers affected by closure of European airspace last week. The airline is considering operating extra flights to clear the backlog of passengers. Some 16,000 Qantas passengers were affected by the airspace closures, with the airline expecting delays to continue for a number of weeks.

Qantas shares did not trade yesterday, due to the ANZAC Day public holiday. 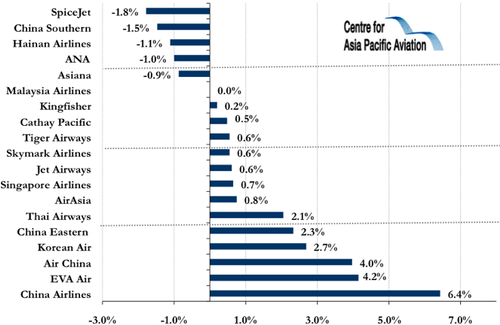