Uganda’s Government will soon consider a plan to relaunch Uganda Airlines as the national carrier to take on the dominance of foreign airlines and take advantage of a growing economy, boosted by a budding oil industry and tourism.

In addition the Government has unveiled plans to invest USD400 million on airport expansion and developments, the bulk of which will be spent on ageing and capacity constrained Entebbe International Airport (EIA), but will also improve several domestic airports to foster the establishment of a domestic network.

A new flag carrier will have to contend with Air Uganda which has growth aspirations of its own while the redevelopment of EIA will better position Uganda to compete with much larger regional hubs in Kenya and Tanzania.

Uganda pushes ahead with plans to relaunch Uganda Airlines

Uganda’s Government is pushing ahead with plans to re-establish defunct national carrier Uganda Airlines, possibly by the end of 2013 as the most optimistic start date.

Uganda Airlines was placed in liquidation in 2001 after attempts to attract investment from several foreign carriers, including British Airways and South African Airways failed. The carrier was established 24 years earlier to replace the service operated by East African Airways – an airline run jointly by Kenya, Tanzania and Uganda – when it was dissolved in 1977.

But while Rwanda, Kenya, Tanzania and Ethiopia have successfully used aviation to foster economic growth over the past decade, Uganda’s development has lagged behind its neighbours.

Mismanagement during the 1990s and weak demand eventually lead to the demise of Uganda Airlines. This time Uganda’s Civil Aviation Authority (CAA) has recommended that a revived Uganda Airlines be protected by legislation from political interference and be adequately capitalised to operate as a viable commercial entity.

Works and Transport Minister Abragam Byandala is due to present a “viability proposal” to the Cabinet, which will consider whether Uganda Airlines should be wholly state-owned or operate through a public-private partnership arrangement, probably involving a strong airline partner.

The government has reportedly previously considered buying an equity stake in the country’s privately-owned “designated” national carrier Air Uganda. However, the proposal going to the Cabinet indicates establishing support for a new carrier that will compete with Air Uganda.

The idea has found favour with farmers, produce exporters and the tourism industry which expect a national carrier will lower international air transport costs, making the country more internationally competitive.

Uganda Airlines will compete with a well-funded Air Uganda

A reincarnated Uganda Airlines will inevitably compete with Air Uganda which has steadily grown its business since launching in 2007, operating a regional network mainly to neighbouring countries covering Kenya, South Sudan, Tanzania, Burundi, Rwanda and Somalia.

Air Uganda added three-times weekly Entebbe-Mogadishu services to its network on 08-Jul-2013 using a 50-seat Bombardier CRJ200. It is the only operator on the route according to Innovata. Air Uganda CEO Cornwell Muleya, who was appointed in Apr-2013, said the new service was part of the carrier’s expansion plan to link more city pairs in Africa through its Entebbe hub in support of trade and tourism. Air Uganda carried 155,000 passengers in 2012.

Kenya is Air Uganda’s biggest single market, accounting for about 37% of its capacity by seats followed by Sudan with about 27% of capacity deployed. 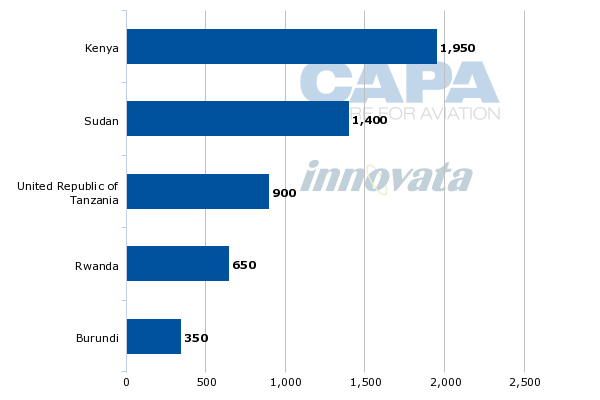 Air Uganda is a member of the Celestair Group of African carriers, which is owned by the Aga Khan Fund for Economic Development (AKFED) and in Dec-2012 attained IATA Operational Safety Audit (IOSA) Certification.

The carrier is reportedly considering combining some operations with its Celestair Group partners Air Burkina, Air Mali and Air Ivoire via a central Africa hub. “We are looking at ways we can join Air Uganda with the rest of the Celestair Group and perhaps integrate our networks to cross from east and west Africa.” Mr Muleya told Routes Online on 17-Jul-2013. The Congo was a market of particular interest and the carrier is also seeking an agreement with South African Airways relating to markets in Southern Africa.

Intercontinental services to the United Arab Emirates and Europe are also being considered, though specifics on destinations and launch dates have not been disclosed and will require fleet expansion including the acquisition of long-haul aircraft.

Air Uganda operates a fleet of two refurbished McDonnell Douglas MD-87s and reportedly received a third CRJ200 in May-2013 under a long-term lease agreement with GECAS.

The Uganda Government, through the Civil Aviation Authority, is investing heavily in its airport infrastructure, including the expansion and upgrading of capacity constrained Entebbe International Airport (EIA) as well as the development of other domestic airports to improve capacity.

The government has announced a USD300 million project to expand EIA and another USD100 million to upgrade Kasese, Gulu, Arua and Kotido airports under a new 20-year Civil Aviation Master Plan.

The master plan, if implemented (similar plans in 1992 and 2012 failed to get off the ground due to a lack of funding), will move Uganda some way towards being able to attract more international traffic and compete with major hubs at Nairobi and Dar es Salaam which are also undergoing extensive development programmes. Rwanda is also constructing Bugesera International Airport to take pressure off Kigali International Airport.

The CAA has acquired 66ha of land for expansion of Entebbe International Airport’s cargo, MRO, fuel and passenger terminal facilities. It also plans to resurface the runway, construct a new control tower and add underground parking facilities. Construction is expected to commence once an ICAO-commissioned feasibility study is completed by the end of 2013. Even so, CAA deputy MD David Mpango Kakuba has reportedly stated that the USD300 million is only half the amount needed to fully redevelop EIA.

Several companies from China, Canada and South Africa have reportedly expressed interest in financing and construction of EIA. The government has indicated that work could begin in 2014/15 if agreement can be reached with a willing contractor. Sadly there has been no suggestion of an open and transparent tender process.

The redevelopment of the airport was first announced in 2004 and was to increase capacity to 2 million passengers per year. Passenger numbers have grown from about 780,000 in 2007 to 1.2 million in 2012, according to CAA statistics, and are forecast to grow at 7% a year for the next decade.

While international traffic is growing at about 14%, driven by higher tourism and arrival numbers and trade, domestic services in Uganda are almost non-existent. Eagle Air is the only scheduled domestic carrier, offering just one route between Entebbe and Arua. The carrier also operates charter services to domestic tourism destinations, using a variety of aircraft ranging from a Beechcraft 1900 to a Cessna 206.

Uganda’s stable political and security environment, which allows safe travel throughout the country by road, and the lack of airports capable of handling scheduled services, all work against air travel which is unaffordable for the vast majority of the population of 37 million people.

There have been a number of attempts to launch domestic services from Entebbe, but all have failed to attract sufficient demand. But as the economy grows and the airport development programme gathers pace a domestic network will be established, supported by a greater emphasis on tourism.

Uganda is well served by foreign carriers, which dominate capacity drawn by the country’s political stability and economic growth prospects.

A total of 17 international carriers operate to Entebbe International Airport of which 11 are African airlines as well as KLM, British Airways, Brussels Airlines, Turkish Airlines and Martinair from Europe. Emirates and Qatar Airways are the only two Middle East carriers to serve Entebbe.

Collectively these carriers offer about 29,000 return seats per week from Uganda throughout Africa, the Middle East and Europe. That compares to Rwanda which is served by 14,500 seats per week offered by foreign carriers, the Democratic Republic of the Congo with 17,000 and Burundi about 8,200 seats per week. 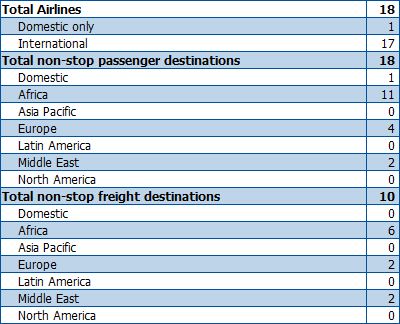 Kenya is Entebbe’s biggest single market by some margin with about 9,400 return seats of which 6,700 are operated by Kenya Airways from its Nairobi hub across 35 weekly frequencies.

RwandAir has increased capacity from Kigali to Entebbe by nearly 300% since Jan-2012 to more than 3,400 return seats per week operating 19 frequencies per week on the route. The increase follows the end of a codeshare with Air Uganda in Mar-2012. 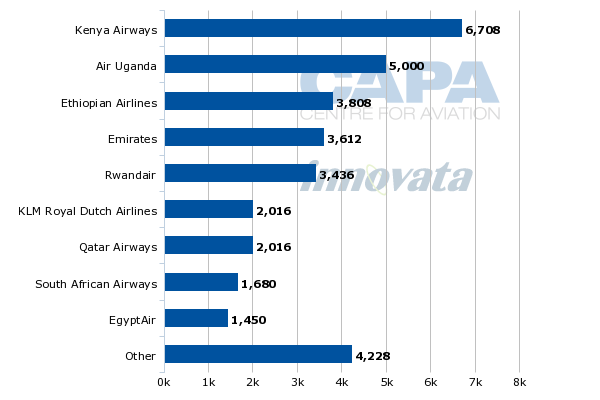 Emirates dominates capacity from the Gulf states, with about 3,600 return seats per week compared to about 2,000 weekly return seats offered by Qatar Airways, giving them a collective 16% share of capacity. Trade between Uganda and the Middle East has increased steadily since the discovery of oil reserves in 2006. But Gulf Air pulled off the Doha-Entebbe route in Feb-2012 after less than three months of operation.

Growth by European carriers has been mixed, with KLM increasing frequencies on its Amsterdam-Kigali-Entebbe route from five times weekly to daily in Apr-2013, but British Airways reduced capacity in Oct-2012.

Uganda’s economy has recovered strongly from the global financial crisis

Uganda’s economy was dealt a blow by the global financial crisis, resulting in a downturn in exports and GDP growth dropping from 7.7% in 2008 to 4.2% in 2012, according to the International Monetary Fund (IMF). But thanks to economic reforms in the 1990s and sound management the economy is recovering, with 5.7% GDP growth forecast for 2013 and 7% in 2015. Uganda’s population is also forecast to increase from 37 million in 2013 to 42 million in 2017.

Investment associated with the fledgling oil industry helped to increase Uganda’s foreign direct investment inflows from USD894 million in 2011 to USD1.7 billion in 2012, according to the United Nations Conference on Trade and Development’s World Investment Report 2013.

While oil promises to become a significant source of revenue once an oil refinery is built and exports begin in the next few years, agriculture remains the most important sector of the economy, employing over 80% of the work force. Coffee accounts for the bulk of export revenues.

Uganda prepares its airport infrastructure for economic prosperity, but the market is not ready for two national airlines

Uganda’s planned airport infrastructure improvement projects will open the way for greater international and domestic connections allowing the country to maximise the benefits from growing trade and tourism, and the inevitable substantial lift in economic growth as oil begins to flow. The boost to the economy will also increase household incomes and the demand for domestic and international air travel.

But the desire to relaunch a flag carrier appears badly flawed, just as a privately-owned and competent incumbent, Air Uganda, is starting to spread its wings. It is hard to find a serious commercial rationale that would justify establishing a government funded flag carrier in these circumstances. The outcome is likely to see just one winner in a market that is not yet mature enough to sustain two carriers.