European airline shares were mixed on Tuesday (12-Oct-2010) after wider markets slipped for the day. Markets ended the session lower as investors awaited minutes from the US Federal Reserve's latest meeting and mining stocks dropped.

Aer Lingus (+1.8%) was one of the day’s strongest performers, after stating the day prior it does not expect any disruption to passengers or flight services when cabin crew commence a work-to-rule on the morning of 13-Oct-2010 in a dispute over rosters, with the carrier putting contingency measures in place to ensure there will be no disruption to services. The carrier declined to comment on whether it would suspend staff if they did not operate new rosters after last week warning that cabin crew could face disciplinary measures, including dismissal, if they took industrial action as planned

Turkish Airlines (+0.8%) rose after announcing plans to double the carrier’s flight operations with the recent delivery of its first A330-300 aircraft and first A330-200 freighter aircraft with plans for the carrier to operate up to 10,000 flights per week by 2015. Turkish Airlines operates a fleet of 147 aircraft with a further 90 aircraft on order. The carrier plans to double its widebody aircraft fleet from 20 to 40 by summer of next year and is scheduled to make a decision between B787 and A350 aircraft order in early next year.

British Airways (+0.9%) also gained after both BA and Unite stated the day prior that they hope to reach an agreement this week regarding their year-long cabin crew dispute. The two confirmed they were in talks with Advisory, Conciliation and Arbitration Service (Acas) last week, with Unite stating “some progress” was made. However, BA CEO Willie Walsh stated that if talks fail again and Unite does launch strike action over Christmas, it has contingency plans in place. Mr Walsh stated all flights, except for short-haul services from London Heathrow Airport, would be operated in such an event.

Air France-KLM (-0.2%) meanwhile slipped after its staff, along with French airport staff, participated in a nationwide strike during trading, to protest plans to reform the country’s pension system. Unions warned they may renew the strike every 24 hours unless the government backs down. Several labor groups voted on 12-Oct-2010 to extend their walkouts through 13-Oct-2010, and unions have called for another day of demonstrations on 16-Oct-2010. French aviation authority advised carriers to cut 50% of services to and from Paris Orly Airport and 30% to and from Roissy Charles de Gaulle Airport due to the strike. Lyon Airport canceled 21% of its services. 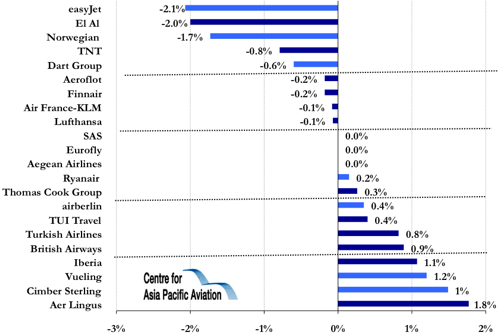