Turkish Airlines once again grew its operating profit in 1H2013 and 2Q2013 and continued its double digit growth in traffic and revenues. However, its net result fell as a result of foreign currency movements and a higher tax bill. Foreign exchange markets and the taxman are non-operating items and should even out over time, but the improved underlying profits demonstrate the success of its transfer traffic-driven growth strategy.

One cause for concern in the operating result is that the first quarter’s growth in revenue per available seat kilometre turned into a decline in the second quarter. Only good cost control, which saw 2Q unit costs fall more than unit revenues, enabled the continued growth in operating profit. Unit revenues can fluctuate with market conditions, but the ability to keep CASK growth below RASK growth is one of the key skills for any airline management.

In 1H2013, Turkish Airlines (THY) saw its net profit fall by 29% to TRY121 million (USD67 million), in spite of a 192% increase in its operating profit to TRY439 million (USD243 million). This discrepancy is due to higher net financial expenses (mainly due to adverse foreign exchange movements in the value of debt) and a higher tax charge than last year.

Dividing the half into two quarters

Looking at the half year divided into its two quarters, 1Q2013 saw losses narrow at both the operating and net level, while 2Q2013 saw operating profit grow and net profit fall (see table below). The weak 2Q net profit, which was around half the figure forecast by analysts (source: Bloomberg), was affected by the currency movements noted above.

In 1H2013, THY saw further strong growth in scheduled passenger traffic, with ASKs up 21%, RPKs up 27% and passenger numbers up 26%. Passenger load factor gained 3.4 ppts to 78.9%. Total distance flown grew by 29%, while the number of landings grew by 23%, reflecting growth in average sector length in accordance with THY’s international expansion.

By region, the strongest growth in passenger traffic was to South America, which saw passenger numbers almost double, thanks in part to a 13.8ppt increase in load factor. Africa and Europe also saw growth rates higher than the network average for the carrier. THY’s strong international growth reflects its strategy of using its Istanbul hub to connect global traffic flows. 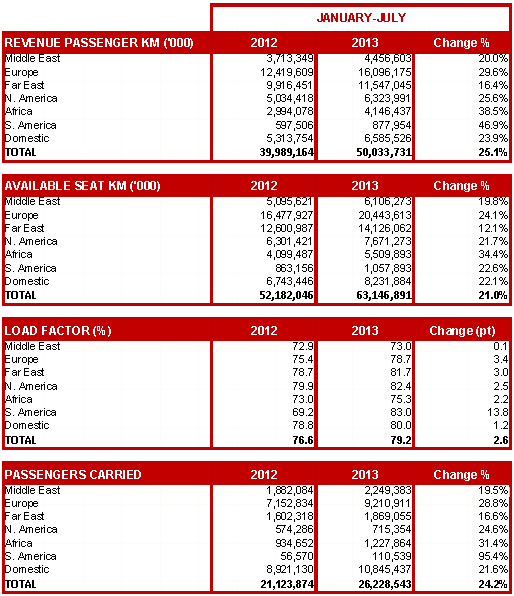 THY’s strong growth has seen it continue to increase its share of AEA passenger traffic. In 1H2013, it carried 12.4% of all AEA airline passengers and 10% of ASKs and RPKs. These figures compare with 4.8% of passengers, 3.7% of ASKs and 3.3% of RPKs in 2006 and made THY the AEA’s third biggest carrier by passenger numbers in 1H2013. 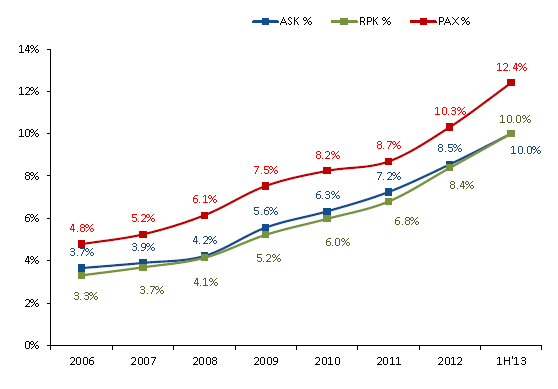 In line with longer sector length, THY also saw an increase average daily utilisation of its aircraft in 1H2013 to 12.4 hours, up from 12.1 hours in 1H2012. Both the widebody fleet and the narrowbody fleet improved their utilisation.

Revenue growth of 23% for the half year, faster than growth in ASKs, was driven by scheduled passenger revenues, which accounted for 86% of the total. Cargo revenues grew at a slower rate of 19%, but this was faster than the 15% growth in freight tonnes carried.

Geographically, THY’s strongest revenue growth in 1H2013 came from Africa (+37%) and Europe (+28%), outpacing ASK growth in each region (34% and 24% respectively). Revenues in the Americas were up by 23%, compared with ASK growth of 22% (North and South America combined). Revenue growth to the Far East of 16% lagged the other regions, but also outpaced ASK growth to the region (12%).

Only in the domestic market did THY see revenue growth fall behind ASK growth (21% versus 22%). This may reflect growing competition from LCC Pegasus Airlines.

The year-on-year growth in costs slowed from 22% in 1Q to 17% in 2Q, in spite of similar ASK growth rates of 21% in both quarters. Excluding fuel, cost growth was similar in both quarters, at 20% and 21% respectively. CASK ex fuel saw modest declines in both quarters (-1.4% and -0.6% respectively). 2Q’s weaker revenue growth relative to 1Q may reflect a lessening of the extent to which THY used ticket prices to cover fuel costs. Mr Kotil’s plans to raise ticket prices by 5%, reported in wiwo.de (17-Aug-2013), suggest that RASK performance may adjust upwards once more in 2H2013.

Currency profiles of revenues and expenses do not match

THY’s operating result is potentially exposed to changes in foreign exchange rates. In particular, it has a long position in euros (revenues greater than costs), which means that a weakening of the euro has a negative impact, and a short position in USD and TRY (revenues less than costs), which means that a strengthening of the dollar and lira have a negative P&L impact.

In order to reduce these exposures, THY hedges its USD and TRY needs on a rolling 24 month horizon, with a hedging rate of 30% one month out, falling to 1% 24 months out.

THY leads its peers… almost

Turkish Airlines recorded the highest 1H2013 EBITDAR margin, 16.1%, among the peers against which it chooses to compare itself. It certainly achieved a better margin than the major legacy flag carrier groups in Europe (see chart below), but Turkish LCC Pegasus Airlines achieved an EBITDAR margin of 20.4% in 1H2013. While their business models and target markets may differ, the experience of other European legacy carriers shows that airlines ignore LCC competitors at their peril. Moreover, for the 2012 financial year, its EBITDAR margin of 17.6% was less than that of Emirates’ 19.0%. The latter is an important benchmark and competitor with respect to THY’s transfer traffic strategy.

EBITDAR margin for Turkish Airlines and selected other airlines: 1H2013 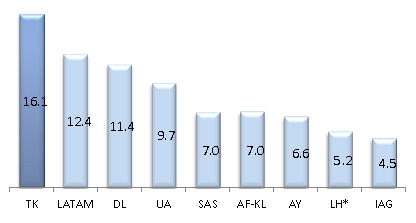 Similarly, THY rightly claims superiority in labour productivity and CASK compared with what it considers its peer group of competitors. It had a higher level of passengers per employee in 2012 than a number of major European, US, Middle East and Asian carriers, although this is not always the most appropriate measure of labour productivity due to differences in the short-haul/long-haul mix.

CAPA’s study of labour productivity among European airlines in 2012 showed that THY has the most productive workforce among legacy flag carriers in Europe, but most European LCCs rank higher. 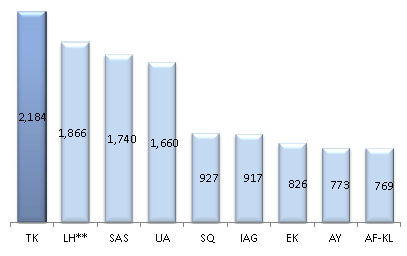 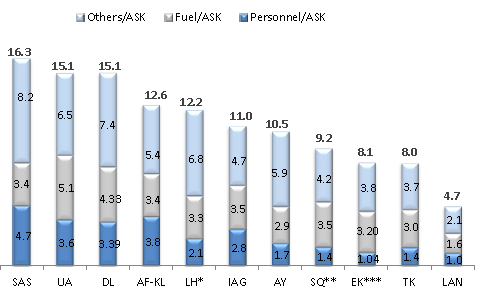 CAPA’s analysis also confirms that THY has the lowest CASK among European FSCs, but, adjusting for average sector length, its cost base is higher than those of European LCCs and significantly higher than Pegasus’. 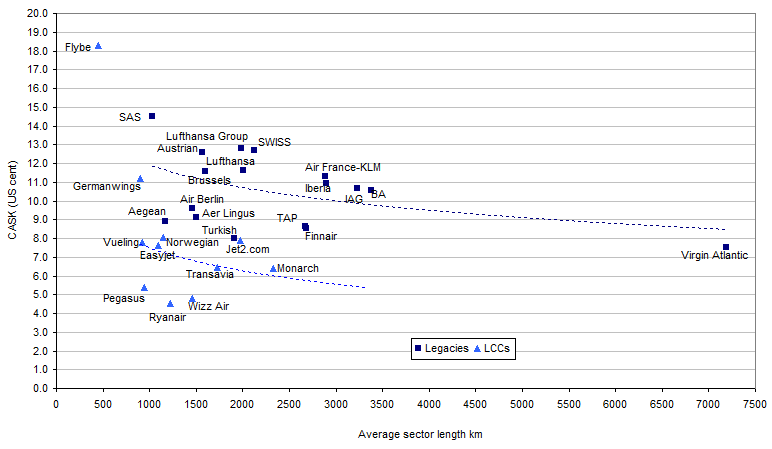 Note: Germanwings is based on 2011 data
Source: CAPA - Centre for Aviation based on company reports

Turkish Airlines intends to maintain strong growth and plans to grow its fleet accordingly. Substantial orders for narrowbody aircraft from both Airbus and Boeing, announced in Mar-2013 and Apr-2013 respectively mean that THY had an outstanding order book of 268 aircraft (227 narrowbody) as of Jul-2013, when its fleet stood at 230 aircraft (see chart below).

This includes the recent conversion of options for three A330-300 aircraft to firm orders. THY is expected to place further long-haul orders and CEO Temel Kotil has said the airline is considering Boeing 777X and A350-1000 aircraft.

Turkish Airlines fleet and projected development: as of Jul-2013

Turkish Airlines' cost focus will need to be maintained

After it reported its 1Q2013 results, CAPA made the following observation about Turkish Airlines:

Its 1Q2013 results saw an increase in RASK and CASK held flat at last year’s level, giving it a good start to the year.

THY’s 2Q2013 results have continued the trend improving operating profit and this resulted from unit costs falling faster than the drop in RASK. Planned ticket price increases may help to firm up RASK in the second half, but strong capacity growth, a growing focus on transfer traffic and price-based competition from Pegasus mean that RASK is likely to remain under pressure.

THY’s creditable CASK performance in 2Q must be maintained.