In CAPA’s report on Turkish Airlines’ 3Q2013 results, we highlighted that RASK growth failed to beat CASK growth for the first time this year and suggested management would want to demonstrate this was not the start of a new trend. The airline has now provided some reassurance on this.

Beyond this issue, CEO Temel Kotil used the recent Turkish Airlines’ investor day to reiterate his strategy of using the carrier’s Istanbul hub to attract global connecting traffic flows, leading to growth ahead of the market, albeit with an increased focus on frequencies rather than new destinations in future. This strategy has similarities with those of the Gulf carriers, but is also underpinned by the significant Turkish home market.

The Turkish market includes strong competition in the shape of LCC Pegasus, but the return to profitability of SunExpress, jointly owned by Turkish Airlines (THY) and Lufthansa, provides THY with another option for facing this competitive threat.

At its investor day on 18-Nov-2013, Turkish Airlines (THY) gave a presentation summarising the growth opportunity in Turkish Aviation and THY’s plans to capitalise on that growth. It also summarised its financial performance in recent years and for the first nine months of 2013. CAPA has considered its financial performance in some detail in previous reports and so this report will focus on the former topics relating to THY’s growth plans.

An important driver of THY’s growth is the geographic positioning of its Istanbul hub, which allows it to capture global connecting traffic flows. According to a chart presented by THY, sourced to Airbus, the global economic centre of gravity has been moving eastwards from a position in the mid Atlantic in 1971 to central North Africa in 2011 and will be in the eastern Mediterranean by 2031. This places Istanbul closer to the economic centre of the world than any major hub in North America, Europe or Asia.

In addition to the growth of transfer traffic, Turkey’s aviation market growth has been driven by the strength of its tourist appeal and the strong growth of its economy. This has stimulated growth in both inbound and outbound point-to-point traffic.

Turkey was the number six tourism destination in the world in 2012 and the compound average growth rate from 2005 to 2012 of 8.4% per annum in visitors to Turkey was the fasted growth rate of any country in the top 10 (source: UNWTO).

Top tourism destinations in the world by country: 2012 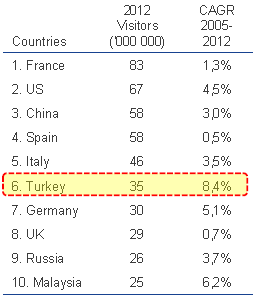 Turkish aviation market by number of passengers (million), domestic vs international and Turkish Airlines vs others: 2003 to 2013E 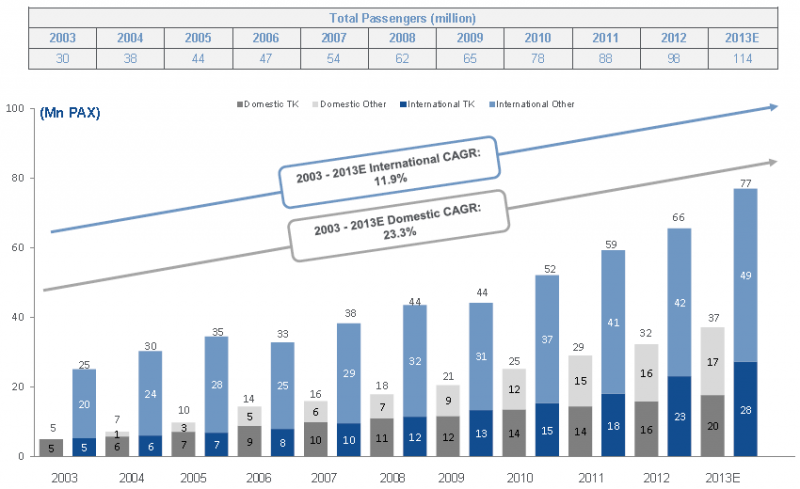 Source: Turkish Airlines from DHMI (DHMI double counts domestic passenger numbers and the above numbers have been adjusted for that)

Istanbul has seen biggest increase in connectivity since 2009

According to MasterCard Worldwide Insights 2Q2013 report on Global Destination Cities, among the world’s leading destination cities, Istanbul saw the greatest increase in air travel connectivity from 2009 to 2013. Its connectivity index gauges the breadth of a city’s international connectivity in air travel in terms of established flights linking the city with others in the rest of the world, as well as the strength of each connection in terms of flight frequencies.

Dubai, home to Emirates, saw the second highest improvement in connectivity. Among the top 10 most improved connectivity cities, all but Dubai and Moscow are located in Asia. 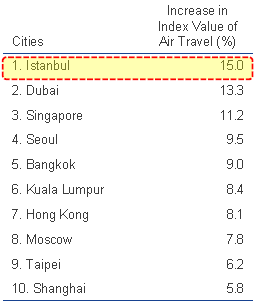 As CAPA has examined in previous reports, THY’s transfer strategy bears some similarities with those of Emirates, Qatar Airways and Etihad. The three Gulf carriers’ hubs are further to the east and to the south than Istanbul. From there, the three all fly non-stop to Australian cities, the only significant omission from THY’s non-stop schedule currently.

However, the geographic location of its Istanbul hub means that, compared with the three Gulf carriers, it is closer to Europe, North America, Latin America, North and West Africa (and western parts of Central Africa). THY’s expansion and future ambitions depend to a large extent on it continuing to grow its share of transfer traffic flows, but, helping to underpin this, its home market is a feature that differentiates it from the Gulf carriers.

The United Arab Emirates and Qatar already enjoy among the highest levels of penetration of air travel of any country in the world, both having well over 10 times the number of airline seats per head compared with Turkey. They also have a significantly higher level of economic wealth per head. Turkey is already a major destination for tourists and continued economic growth should continue to drive growth in the point-to-point market.

From 2003 to 2012, THY’s passenger numbers have grown at a compound average annual rate of 14.8% per annum as they increased from 10.4 million to 39 million. International growth has driven average distances upwards and average growth in ASKs and RPKs has exceeded that of passenger numbers, at 16.6% and 18.5% respectively over the same period.

Turkish Airlines number of weekly flights versus number of destinations: 2004 to 2014E 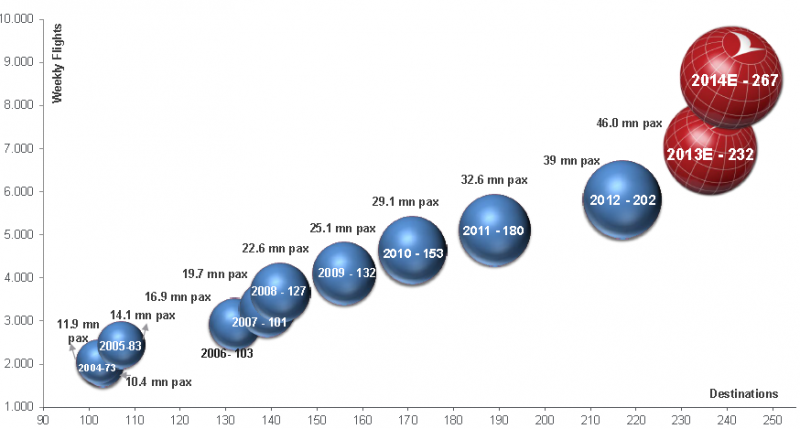 Turkish's RASK is stable in spite of rapid growth

In spite of the rapid growth in capacity over many years, THY’s unit revenues (RASK) have remained broadly stable since 2010 and have grown since 2003. At the same time, it has managed to keep unit costs (CASK) under control. For further analysis of THY’s financial performance, see the two reports referenced near the start of this report. 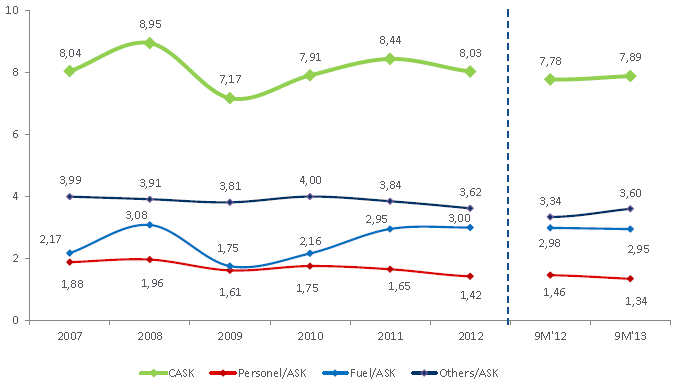 Through its investor day presentation and subsequently, THY has shed a little more light on why a sharp upward movement in CASK was not accompanied by an equivalent rise in RASK in 3Q2013 (an issue highlighted by CAPA in our 14-Nov-2013 report: Turkish Airlines: quarterly operating profit falls in 3Q2013, but cargo activity strengthens)

At the investor day CEO Temel Kotil said that THY had switched from a leg-based revenue management system to one based on pricing connecting trips on an O&D basis at the end of 2Q.

This will have benefits for the carrier: “As Turkish Airlines flight network expands, a new revenue management system is required to value each seat on the network more precisely. The new system, OnD based Revenue Management, maximizes the total revenue of the network” said Mr Kotil. However, there were transition problems, which also affected advance bookings.

Growth in CASK year-on-year was inflated by a number of elements (apart from currency movements) in 3Q2013.

These included the expansion of THY’s maintenance business, which added to labour costs without a related increase in ASKs; new wet leases and owned aircraft adding to ownership costs; higher navigation and ground handling prices; increased catering prices reflecting a new catering concept; and a switch of some maintenance costs from 3Q2012 to 4Q2012, which should normalise with the 4Q2013 and FY2013 results.

Fleet growth plan is being accelerated 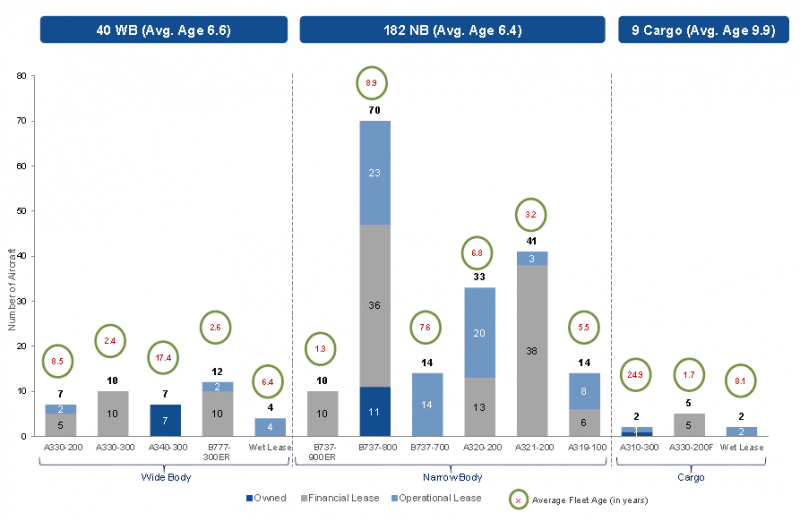 Recent orders mean that THY has a major delivery programme over the next decade (and there are possibly more, long-haul, orders to come). In Oct-2013, THY had a total of 267 aircraft on order, of which 40 for widebodies and 227 for narrowbodies. This weighting towards narrowbodies, both in the existing fleet and in the outstanding orders, reflects the geographical location of Istanbul.

This means that more than 40% of worldwide international traffic is within narrowbody range of Istanbul and THY serves 168 out of its 197 international destinations with its Boeing 737 and A320 family aircraft. This narrowbody focus sets it apart from the Gulf carriers, whose fleets are much more weighted towards twin aisle aircraft (see Turkish Airlines: narrowing the strategic Gulf: Part 1). 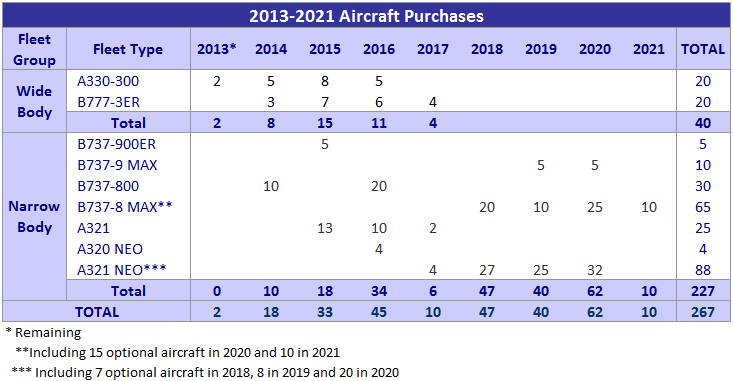 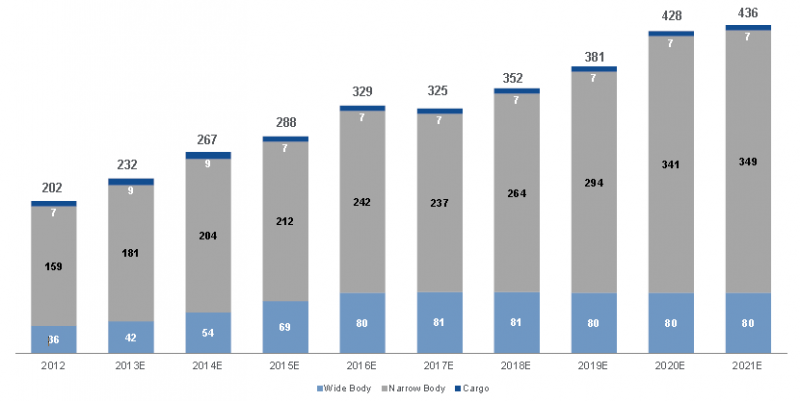 Network development to focus on frequencies

Between now and 2021, the additional aircraft will be used to expand capacity mainly through increased frequencies, with growth in destinations slowing relative to recent years (although THY also plans 37 new points on its network). This reflects a maturing of the network. Across its network, THY currently serves 74% of destinations with at least a daily frequency. 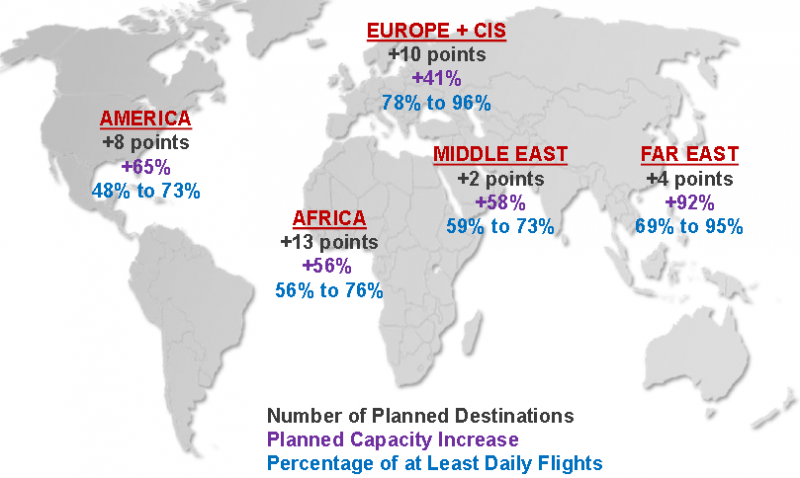 In addition to its main hub at Istanbul Ataturk Airport, from where it serves 222 destinations, THY also operates from Istanbul’s second airport at Sabiha Gokcen. 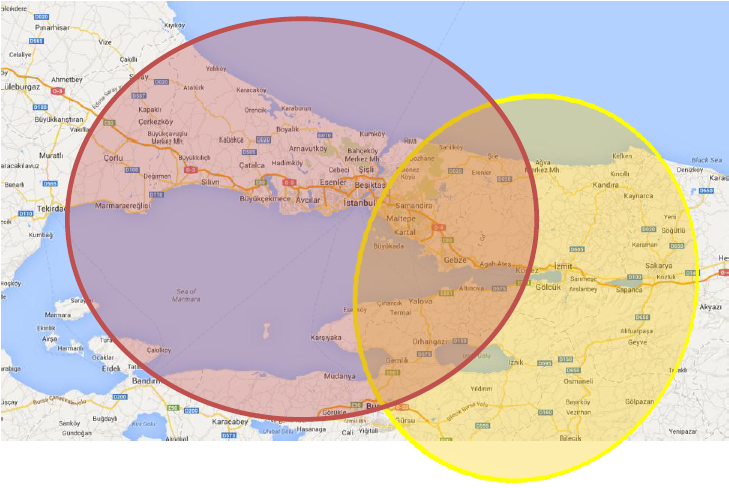 In 2013, THY has a total of 14 aircraft, including seven aircraft of THY’s lower cost subsidiary AnadoluJet, at Sabiha Gokcen (SAW). It operates 19 domestic and 11 international routes from the airport and doubled its passenger numbers in the first nine months of 2013 to 2.6 million, with a 77% load factor.

The use of SAW has allowed THY to continue its growth in passenger numbers and connectivity, while avoiding the capacity bottleneck at Ataturk. Moreover, SAW offers an additional catchment area on the Asian side of the Bosphorus and has lower airport charges than IST.

In 2014, THY plans to increase the number of aircraft at SAW to 24, including nine AnadoluJet aircraft. The number of domestic routes is planned to fall to nine, while the number of international destinations will increase to 27. 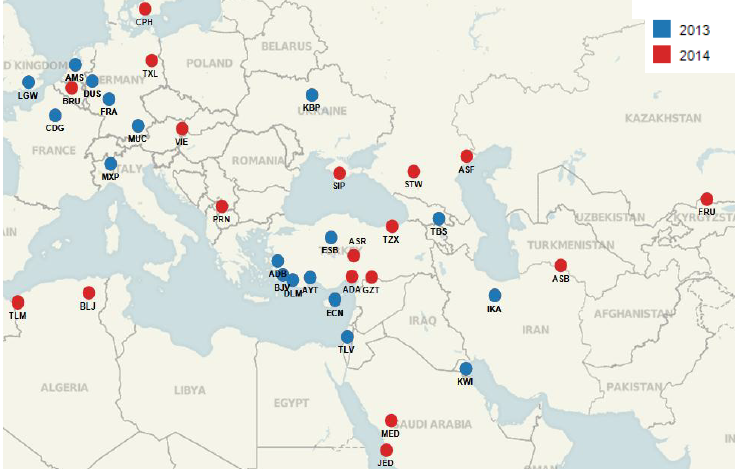 Istanbul Ataturk is currently operating close to its capacity limits, but THY says that its capacity could increase by 30% with a number of measures.

First, changes in tower management can increase the number of aircraft movements from 58 to 80 per hour, an increase of 43%. In addition, the number of aircraft parking positions will increase from 102 to 145 in 2014. Third, a planned new international terminal could bring a 50% increase in boarding gates to 63. Fourth, THY points to management measures that could improve passenger flows, such as ‘easy-pass’ boarding passes, the privatisation of passport control and the elimination of security control at the terminal entrance. Finally, THY argues that an optimised wave structure would also make a contribution to enhanced capacity.

Nevertheless, a new airport at Istanbul is required and construction on this project is expected to start by the first quarter of 2014, with operations commencing in 2019. 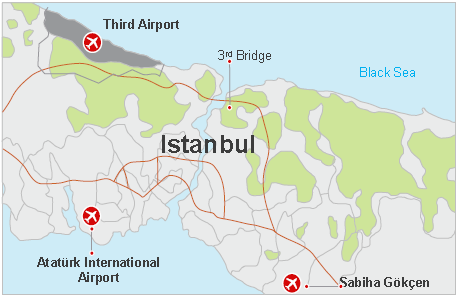 Turkish Airlines has a number of subsidiaries and joint ventures within the group, including SunExpress, its 50-50 joint venture with Lufthansa. Loss-making in 2010, 2011 and 2012, SunExpress returned to profit for the first nine months of 2013 thanks to a strong 3Q.

In 3Q2013, SunExpress made a net profit of TRY146 million (EUR53.6 million), bringing the nine month result to TRY122 million (EUR44.8 million), compared with a loss of TRY11 million (EUR4.04 million) in the first nine months of 2012. The 3Q result was easily its best quarterly result for at least five years, emphasising the importance of the peak summer season to this leisure-focused LCC.

Neither THY nor Lufthansa reports much operational data on SunExpress and so it is difficult to analyse the causes of this turnaround in profitability.

Our previous analysis of SunExpress suggested that it was very competitive on price, but that its costs were too high for its revenues. A restructuring programme was initiated in 2012 and this seems to have made a positive impact.

If SunExpress’ return to profitability can be repeated on a sustainable basis, and THY now expects that it can, then THY may find growing uses for this low-cost carrier on its short-haul point-to-point routes. In a market that includes ultra-LCC Pegasus as a competitor, this option could be useful. Indeed, the majority of the operations of THY’s short-haul subsidiary AnadoluJet, which mainly operates in the domestic market, are outsourced to SunExpress already.