Turkish Airlines’ 3Q2013 net profit was level with the same period last year, but only thanks to non-operating items. The operating result for the quarter was below that of 3Q2012 as RASK growth failed to beat CASK growth for the first time this year. The carrier’s capacity and revenue growth continue at double digit rates, so maybe the occasional stumble is inevitable.

The brightest aspect of the 3Q results was what looks like the beginning of a rebound in cargo activity, which significantly outpaced the passenger business in terms of growth versus last year. Nevertheless, cargo is only 8% of revenues and the passenger operation business continues to be the major driver of the business.

Management will be looking to demonstrate that the weakening of unit revenue growth and strengthening of unit cost growth are not the start of new trends.

In spite of this, the net profit was level with last year at TRY705 million (USD360 million). This was mainly thanks to two items below the operating result. First, the group’s tax charge was lower in 3Q2013 than in 3Q2012 and, second, THY’s equity-accounted associates made a bigger contribution towards its net result this year (TRY104 million versus TRY15 million last year). The latter improvement principally reflected better results at 50% owned SunExpress, THY’s joint venture with Lufthansa.

For the first nine months of 2013, THY’s operating profit increased by 12% to TRY1,303 million (USD748 million), although operating margin fell by 1.1 ppts to 9.4%. Nine month revenues were up by 26% and operating costs by 28%. In spite of the growth in operating profit, nine month net profit fell by 6% to TRY826 million (USD444 million). This was mainly due to higher financial charges, in particular foreign exchange losses and adverse movements on derivatives, and a higher tax charge for the nine month period.

The growth in THY’s air cargo volume picked up appreciably in 3Q2013. Tons carries in the quarter grew by 24% year-on-year, an acceleration of the 15% growth rate in 1H2013. Nevertheless, cargo ton growth in the first nine months of the year, at 18%, lagged the 24% growth in passenger numbers. 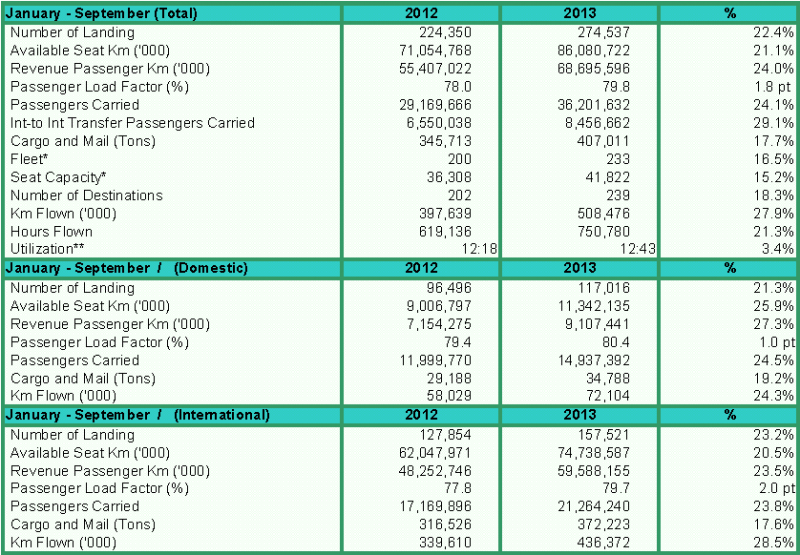 Africa is also a focus of growth for the airline and now accounts for almost the same number of THY’s ASKs as the Middle East. Indeed, there have been reports that THY is looking to acquire a controlling stake in an African carrier.

THY’s domestic capacity growth has accelerated in the second half of the year, with ASK growth of 26.1% in the Jan-Oct period compared with 22.1% growth in Jan-Jul. 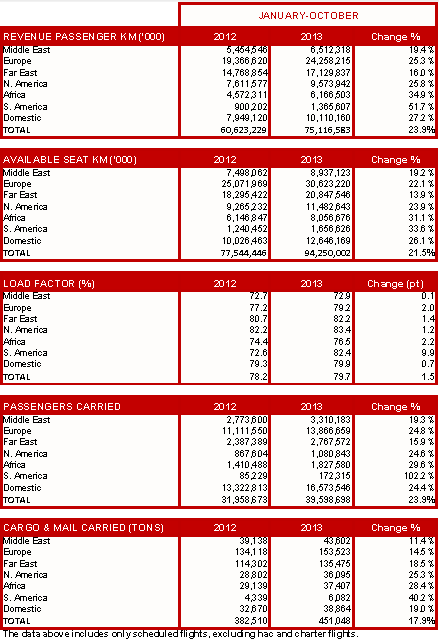 The focus of international growth is on transfer traffic as THY continues to pursue its strategy of using its Istanbul hub to connect global traffic flows. 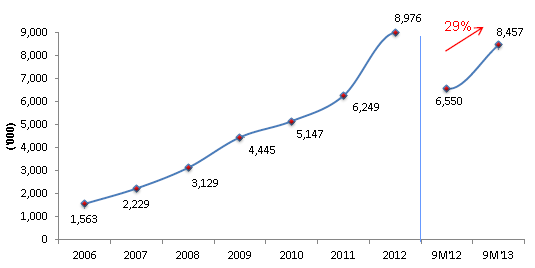 Growth in total revenues accelerated to 28% in 3Q2013, after 23% growth in 1H2013. Growth in 3Q was faster than ASK growth of 21%. This reflected not only increased scheduled passenger revenue per ASK, but also strong growth in cargo revenues, which increased by 42% year-on-year (compared with 24% growth in tons carried).

The rebound in cargo volume and pricing in 3Q, albeit from a low base, suggests the first tentative signs of a recovery in air freight markets for THY. Cargo revenues per ton grew 15% in 3Q, after only 3% growth in 1H2013. 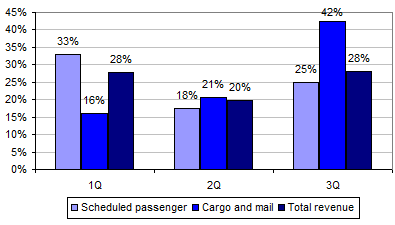 By geographical region, growth in scheduled flight revenues (which includes cargo) was strongest in Europe (+40%), America (+39%) and Africa (+36%) in 3Q2013. In Europe and America, this represents a significant acceleration of revenue growth in 1H2013 (+28% and +23% respectively), whereas revenue growth in the Far East and Middle East was much lower in 3Q than in 1H.

THY’s operating costs grew by 40% in 3Q2013, much faster than the growth in revenues and ASKs. Moreover the rate of growth was approximately twice the rate of cost growth seen in 1H2013.

As was the case for Pegasus Airlines in 3Q2013, the weakening of the Turkish lira had a significant impact on THY’s CASK figures. In USD, its CASK grew by 8.9% year-on-year, but, when translated into TRY, the increase was 16.2%. This is because more than half of THY’s operating costs are in USD and so expenses are inflated by an appreciation of the US currency versus the Turkish currency. In USD, ex fuel CASK was flat year-on-year, but it was up 19% in TRY.

It is also worth noting that currency movements had a positive impact on THY’s reported revenues in TRY. Overall, the impact on operating profit in 3Q2013 was probably broadly neutral.

THY has had a fairly healthy 2013 so far in terms of profitability. Its 9.4% operating margin for the first nine months would be coveted by many European competitors, even though it fell slightly from last year. It continues its rapid growth in traffic and revenues, driven by growing its global connections. The apparent resurge in cargo volumes and revenues is a new cause for optimism.

The nagging worry comes from the downward step taken by operating profit in 3Q2013. Good cost control, as reflected by flat to falling CASK in 1Q and 2Q, has tuned into a sharp upward move in CASK in 3Q and this has not been accompanied by an equivalent rise in RASK.

While the weak lira has affected these results, the same observations can be made of THY’s USD-translated figures. In USD terms, 3Q RASK fell by 1%, suggesting an underlying weakness in pricing power. Is THY’s rapid capacity growth starting to be too much? It is to be hoped that the 9% increase in USD CASK in 3Q is a one-off and not the start of a trend of RASK outpacing CASK. 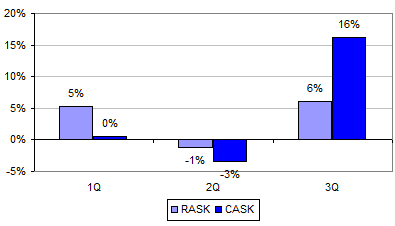 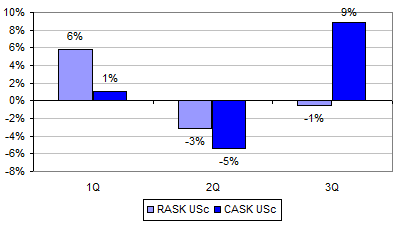