European airline shares continued their recent fall with wider markets on Thursday (12-Aug-2010) with a mixed day of trading. After a strong day, European share markets generally fell in the afternoon after the US reported a higher-than-expected number of jobless claims.

The improved load factor was the result of a 5.3% increase in traffic (RPKs) on a 1.9% increase in capacity (ASM).

Vueling’s decline came after news Spain's Leading Economic Index (LEI) declined (12-Aug-2010) 0.5% in Jun-2010, while the Coincident Economic Index (CEI) increased 0.2% in the month, according to The Conference Board. The board stated it expects economic recovery in the country to remain weak in the near term. Spain’s MSCI fell 0.5% for the day as a result.

Elsewhere, Norwegian Air Shuttle (-5.0%) was the biggest fall of the day, while Aer Lingus (-4.3%) continued its decline after cabin crew announced plans to launch industrial action. 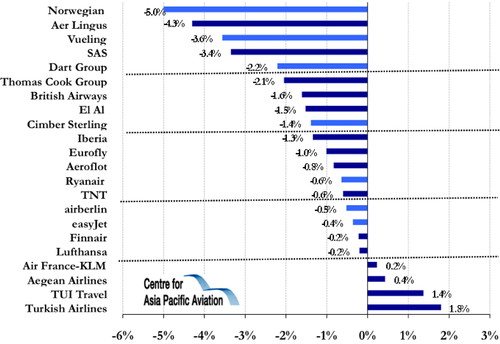