Turkish Airlines expects USD6bn in revenue for 2010; Aeroflot up on improved traffic

European airline shares rebounded on Thursday (26-Aug-2010) as wider markets rallied on improved financial results and better-than-expected US jobs data. The rise in airline shares was despite a 1.2% rise in oil prices to USD73.36.

Turkish Airlines (+1.3%) gained after CEO, Temel Kotil, stated the carrier forecast improved revenues of approximately USD6 billion in 2010, adding that 10% of 2010 sales would be recorded as profit for the company. The CEO added that the carrier has benefited from its network expansion (the carrier has added 24 new destinations in 2010, for a network of 94 international destinations), with transit passengers expected to total 6 million passengers in 2010.

Passenger numbers on the rise in Russia

Aeroflot (+0.8%) also made a slight gain, after Russia’s Federal Air Transportation Agency announced passenger numbers in the country increased 30% year-on-year in the first seven months of 2010 to 31.2 million. The improvement was driven by an increase in Aeroflot’s traffic, with the carrier handling 6.3 million passengers over the period, an increase of 33%. Transaero was the second largest carrier, with passenger numbers rising 39% to 3.6 million.

Air Berlin (+2.1%) gained after stating developments in passenger numbers in the first weeks of the current quarter point towards improved business for 2H2010. The carrier reported an EBIT of -EUR28.2 million, due to losses from the ash crisis in Apr-2010. 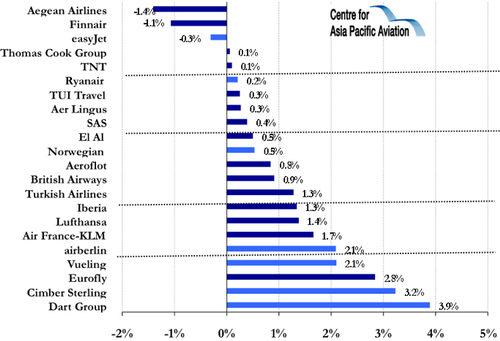