The value of the Turkish lira (TRY) lost a quarter of its value against USD between 8-Aug-2018 and 13-Aug-2018, before starting to rally.

For both Turkish Airlines (THY) and its low cost rival Pegasus Airlines, it's not all bad news. Their currency exposure is complex; both have significant costs and revenues in USD and EUR in addition to those in the local currency, TRY. The different mix of revenues and costs in these currencies for each airline is such that a weaker TRY may be better for Turkish Airlines than for Pegasus.

Both airlines reported 1H2018 financial results as the currency crisis was unfolding, but Pegasus maintained its EBITDAR margin guidance for the year and THY actually increased its guidance. For both, this may have been too soon for any impact on underlying demand to be visible.

Traffic figures for Aug-2018 may be the first indicator, but ticket pricing (and aircraft financing) in hard currencies by both airlines should help to mitigate the impact.

Turkish Airlines has a balance of USD revenue and costs, but its P&L is short TRY and long EUR 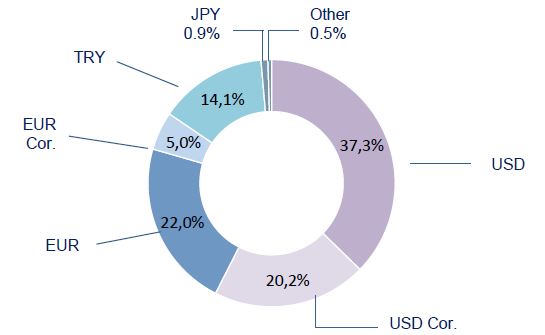 Note: currencies that have 85% correlation with USD and EUR are considered as USD and EUR correlated respectively.
Source: Turkish Airlines 1H2018 results presentation.

The importance of USD to Turkish Airlines is such that it reports its financial results in the US currency. 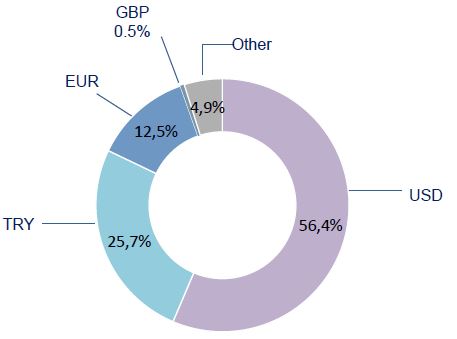 The balance between THY's USD exposure in revenues and costs would seem to provide a natural hedge, while its P&L is short TRY and long EUR. It has hedged 25% to 30% of its EUR/USD and EUR/TRY exposures, but a weaker TRY versus EUR is positive for its P&L.

Turkish Airlines' debt is all in hard currencies

In this respect, THY is better off than many other Turkish companies with USD or EUR-denominated debt but with revenues in the local currency, who now need more TRY to service their debt.

Moreover, 76% of THY's debt is at fixed rates of interest, which limits its exposure to interest rate fluctuations.

Passenger numbers were up 17.8% in 1H (with load factor up by 4.3ppts) and 15.2% in Jul-2018, so traffic figures for Aug-2018 to be published in Sep-2018 will be the first opportunity to assess the impact, if any, of the recent currency crisis, which was only just starting to unfold at the time of THY's 1H2018 results announcement.

Since THY prepares its accounts in USD and finances aircraft in hard currencies, any weakening of TRY has no impact on the prices it pays for aircraft. 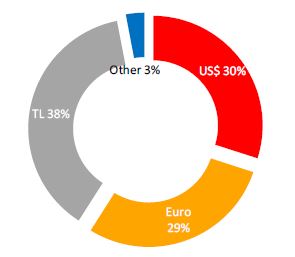 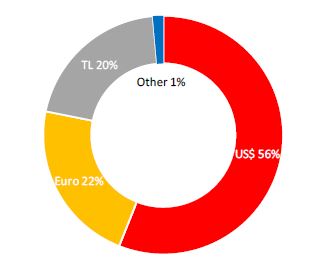 Pegasus' debt is all in hard currencies

All of Pegasus' debt is in either EUR (57%) or USD (43%) and its hard currency revenue is available to service this.

In addition, its international revenue collected in TRY and up to 25% of its domestic revenue are converted to USD, but these conversions are subject to currency risk, with the weaker TRY meaning fewer dollars.

Pegasus finances aircraft in hard currencies, so any weakening of TRY has no impact on the prices it pays for aircraft (although its balance sheet, reported in TRY, reflects changes in asset values resulting from currency movements versus USD).

In addition to the mechanical impact of currency movements on the costs and revenues in a company's P&L, underlying demand can also be affected.

However, for both THY and Pegasus, the majority of revenue is in USD and EUR, reflecting their policies of pricing tickets in hard currencies, and so demand for their tickets from outside Turkey may not be affected by TRY weakening.

The weaker TRY means that products and services sold in Turkey in the local currency, including tourist services, are cheaper to inbound travellers; this could possibly – and should – increase demand for travel to the country.

On the negative side, foreign travel becomes more expensive for Turks paying in TRY and this could decrease demand for outbound travel.

Moreover, for tourists, political stability and security are important and inbound demand could perhaps be adversely affected by any unease towards Turkey at some point and by any general weakening of the economy resulting from the current situation.

But overall, in the short term at least, the steep weakening of the TRY is attracting media attention in all of Turkey's tourist origin markets, so there could be good news for both of Turkey's airlines as tourists from the harder currency markets are attracted.