Turkey’s aviation market: healthy growth to continue at one of the world’s oldest cross-roads

News that Nordic Office of Architecture has been awarded the right to design Istanbul’s new airport, following recent reports that construction may start in May-2014, refocuses attention on Europe’s fastest growing aviation market.

Ultra-LCC Pegasus Airlines and network carrier Turkish Airlines were, in 2012, respectively Europe’s second and fourth most profitable airlines (based on 2012 operating margin).

Air passenger numbers in Turkey have grown at double digit rates in five out of the past six years. The success of Turkey’s aviation sector has been built on healthy economic growth, a relatively productive and inexpensive workforce and Turkish Airlines’ use of its Istanbul hub to attract international transfer traffic.

This growth has been driven by relatively strong GDP growth. The average rate of growth in real GDP in Turkey was 5% from 2003 to 2012, although Turkey was not immune to recession, seeing negative GDP growth in 2009 – when passenger growth nevertheless remained positive. Traffic growth is also driven by the under-penetration of aviation in Turkey. In 2012, total passenger growth was 10.4%, even though GDP growth slipped back to 1.9%.

Healthy GDP growth rates are forecast to continue. The Economist Intelligence Unit expects Turkey’s GDP to grow at an average annual rate of 4.8% between 2012 and 2017. While this is lower than the fastest-growing emerging markets, such as China and India, it compares favourably with a world average forecast of 2.9%. Healthy GDP growth augurs well for healthy air traffic growth.

Low penetration of aviation in Turkey

Aviation penetration in Turkey is lower than in the major Western European countries and the US, mainly because Turkey has a lower GDP per capita. Continued growth in its economy, in particular in GDP per capita, should continue to drive growth in aviation. 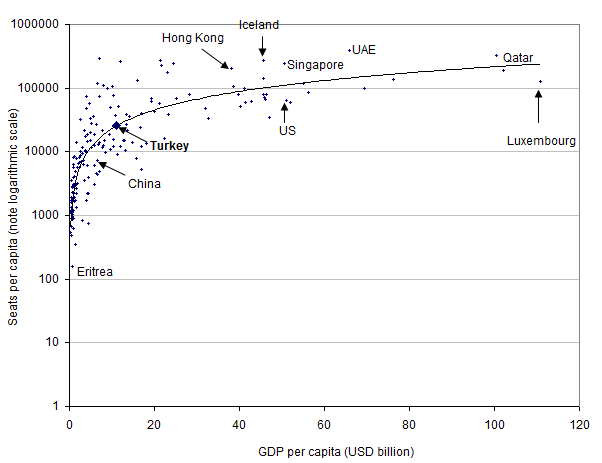 Moreover, Turkey is one of the world’s most popular destinations by arrivals and has enjoyed a high growth rate in both arrivals and departures (see chart below). 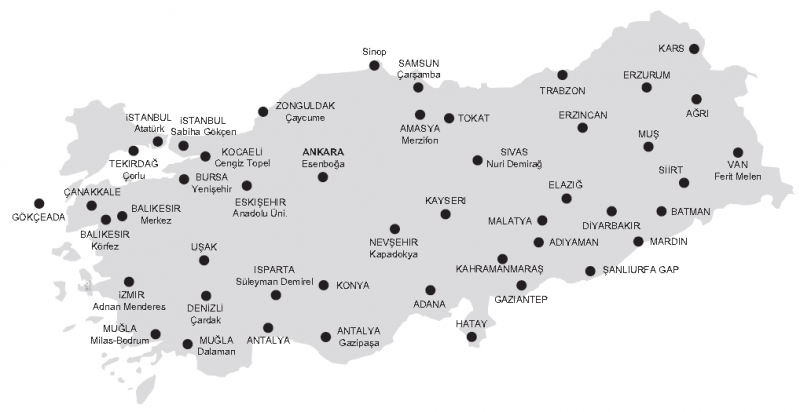 The two Istanbul airports handled a total of 60 million passengers in 2012, around one third of the country’s total, and this figure is forecast to double over the next 20 years. This raises questions over the city’s airport capacity.

Istanbul Ataturk, on the European side of the Bosphorus, currently has three runways, with capacity for 55 movements per hour and official terminal capacity of around 40 million passengers. In 2012, DHMI data show that it was operating at around 90% of its runway capacity.

A fourth runway, 2,500 metres long and 60 metres wide, has been requested by Turkish Airlines at Ataturk Airport and is being studied. It would increase the airport’s runway capacity to 70 movements per hour, allowing the airport to meet expected demand needs for another 10 years. Increases in terminal capacity, aircraft stands and aircraft parking capacity are being planned. A lack of available land is a significant constraint.

Sabiha Gokcen has one runway, with capacity for 28 movements per hour and has plans to add a second runway. Its terminal capacity is around 25 million passengers per annum.

Even with the planned enhancements to capacity at the two existing airports, the Turkish Government and the Turkish aviation sector agree that the construction of a third Istanbul airport is needed on the European side of the Bosphorous. A tender for a Build Operate Transfer contract was completed on 3-May-2013, and won by a consortium of construction companies ‘Cengiz, Mapa, Limak, Kolin and Kalyon’.

The winning consortium bid EUR22 billion for the 25 year contract, outbidding a Fraport-led consortium amongst others. The Norwegian architects Nordic Office of Architecture joined forces with Haptic Architects, Grimshaw Architects and Arup Associates for the terminal design contract awarded by the Turkish consortium on 10-Oct-2013. The Nordic Office of Architecture has previously developed Oslo Gardermoen Airport and is currently working on a project at Hyderabad Rajiv Gandhi Airport.

Construction costs will be approximately EUR10 billion, of which EUR7 billion in the first phase. The new airport will be one of the biggest in the world with an initial capacity of 90 million passengers in 2019, rising to 150 million within 10 years. In its final phase, it will have four connected terminals and six runways.

Turkish airlines account for 80% of seats; Star is leading alliance

There are six airlines serving the domestic market and 99 serving the international markets from Turkey. National flag carrier Turkish Airlines (THY), which is listed on the Istanbul Stock Exchange and 49% government-owned, is the country’s largest airline, with almost 50% of seats (week of 14-Oct-2013, source: Innovata). LCC Pegasus Airlines, which completed an IPO earlier this year, is number two with 19% of seats. Turkish carriers account for around 80% of seat capacity, with the biggest foreign carrier, Condor, taking a share of less than 2%. 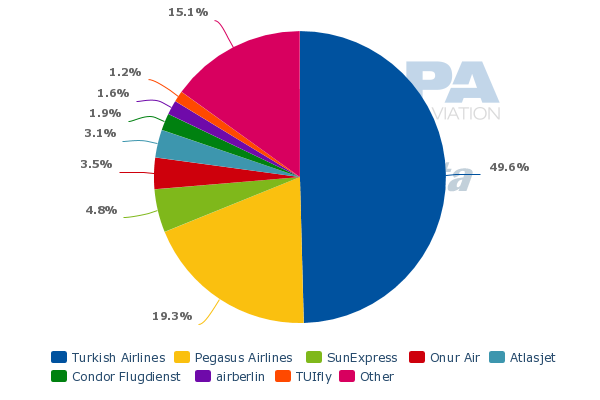 Not surprisingly, given THY’s alliance membership, the Star Alliance is by far the biggest branded global alliance in Turkey, with more than half of the total number of seats. Oneworld and SkyTeam each have around 2%, significantly less than the 44% share held by unaligned carriers. 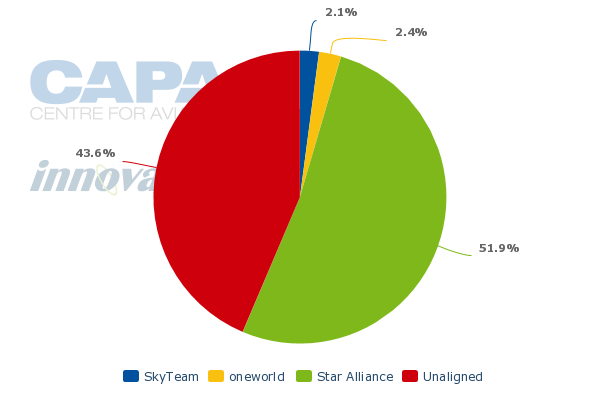 Low-cost carriers have 20% of domestic seats and 53% of international seats in Turkey (Jan-2013 to Oct-2013, source: CAPA/OAG). These LCC shares have been fairly stable over the past four years. Pegasus is by far the biggest LCC in Turkey, but Atlasjet and SunExpress are also in this segment. The biggest foreign LCCs operating to Turkey is TUIfly, with only around 6% of the capacity of Pegasus, followed by Monarch and easyJet. 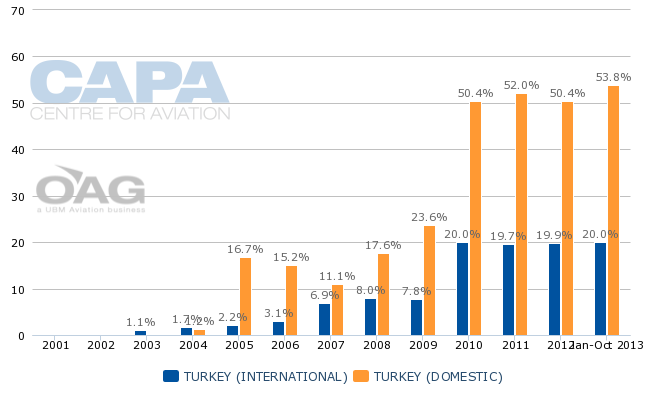 *Year to date
Source: CAPA - Centre for Aviation with data provided by OAG

In spite of higher growth in the domestic sector over the past decade, Turkey’s aviation market is still dominated by the international markets, which account for almost 62% of seats (week of 14-Oct-2013, source: Innovata).

Almost half of international seat capacity to/from Turkey is on routes to Western Europe. Eastern/Central Europe accounts for one fifth of seats. The Middle East takes 14% of seats and North Africa 4%. The biggest country destination is Germany, reflecting ethnic and economic ties, followed by the United Kingdom, Cyprus and Russia. 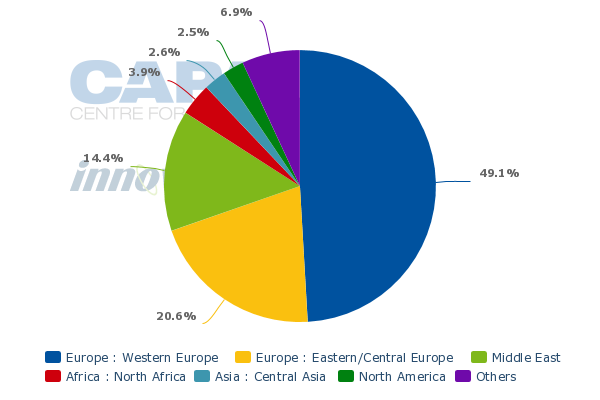 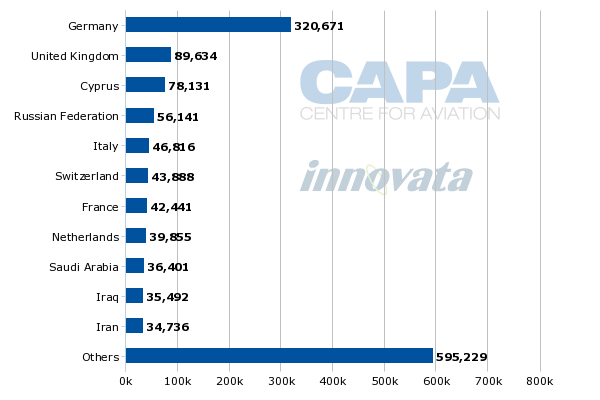 Turkey’s geographical location is such that short/medium-haul destinations overall account for 88% of international seats. This has also been a significant driver of THY’s successful strategy to position its Istanbul hub to compete on the international transfer markets.

Both THY and Pegasus are seeing stronger growth in international passenger numbers compared with domestic. Although their strategies are very different – one a network carrier, the other a point-to-point ultra-LCC – both have been financially successful with operating margins among the highest in Europe. This success is partly due to a relatively low wage economy, although Turkey’s number three carrier, SunExpress, recorded a loss in 2012. 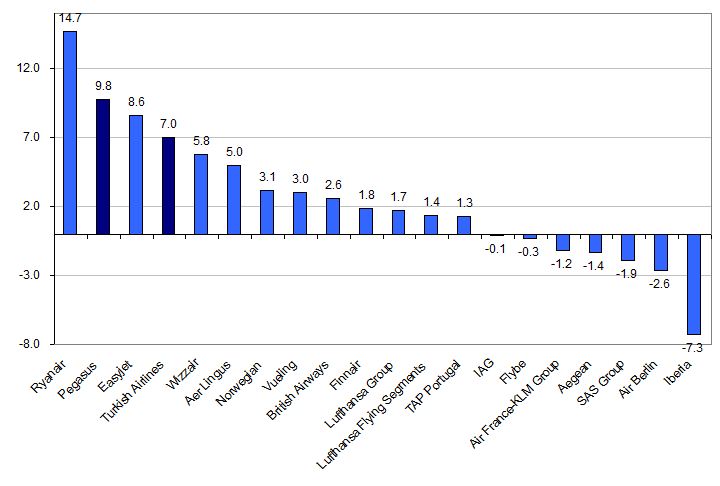 The success of Turkey’s aviation sector looks set to continue. Turkish airport authority DHMI expects passenger growth to average 8.7% p.a. between 2011 and 2015. Eurocontrol forecasts that the number of flights in Turkey will grow at an average annual rate of 7.0% p.a. between 2012 and 2019, the fastest growth of any European country.

The need for a new airport in Istanbul is a result of this success and the airport should also facilitate its continuation. Located between Asia and Europe and at the junction of important sea and land routes, Turkey’s largest city has always been an important crossroads. This provides a firm basis for THY’s pursuit of international transfer traffic. This strategy has similarities with those of the Gulf carriers, with the added advantage that Turkey also has a significant domestic market.