European airline shares slumped on Tuesday (10-Aug-2010), moving with wider markets. European shares were down on news of a wider than expected trade surplus in China for Jul-2010 and continued concerns ahead of the US Federal Reserve’s latest meeting.

TUI Travel (-40.0%) plummeted after reporting a 4% year-on-year decline in revenue for the three months ended 30-Jun-2010. This resulted in an underlying profit of GBP103 million, a 1% improvement.

The group stated the impact of the volcanic ash disruption, including the affect of further airspace closures in May-2010, is estimated to be GBP105 million and almost 400,000 of its customers were affected.

Thomas Cook (-7.4%) was also down on expectations it will also report disappointing results for the period this week.

Lufthansa (-2.0%) announced during trading that the “dynamic recovery” in passenger and freight traffic continued in Jul-2010. The group reported a 21% year-on-year improvement in passenger numbers for Jul-2010, to 8.9 million. Load factor rose 1.3 ppts for the month to 84.7%, with record loads in the America and Asia Pacific regions.

Following a strong day of trading the day prior, the carrier moved to the bottom of Germany’s DAX for the day, due to profit taking by investors. The carrier’s shares have risen more than 20% in the past eight weeks.

Eurofly (+4.3%) was the only gainer of the day, after reportedly closing its new share sale. 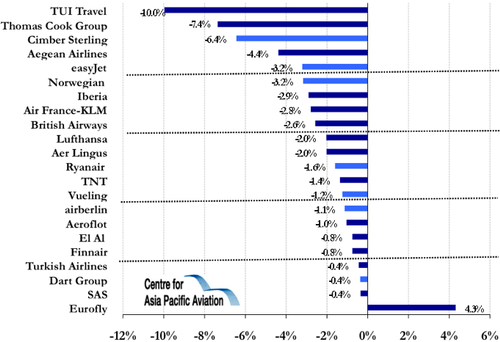