Shares in Air France-KLM fell 5.9% yesterday ahead of the release of its traffic figures for April, which are expected to show a boost from Easter. Rival British Airways’ shares fell 4.1% as BAA, operator of London Heathrow, Gatwick and Stansted airports, reported its 13th consecutive month of declines in passenger traffic across its portfolio in April.

Europe’s largest tour operator, TUI AG, was dumped yesterday as its first quarter profits missed market expectations. Without the proceeds from the sale of its stake in shipping company, Hapag-Lloyd, TUI would have reported a EUR377 million net loss. TUI Travel however confirmed it is “well-placed” to meet its annual forecast, citing improved summer bookings.

Meanwhile, TNT’s shares were steady as it announced plans to seek shareholder approval to acquire a stake in the UK’s Royal Mail. 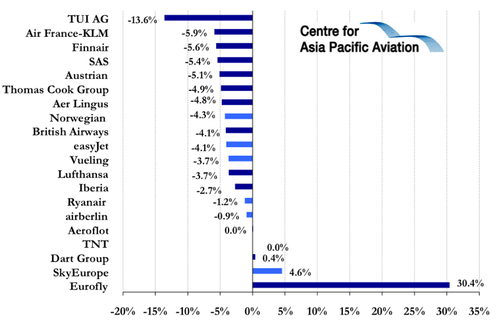