Transavia pulls out of Denmark; Sterling to benefit

Shares in Cimber Sterling slumped 11.8% yesterday, following a 26.1% gain on the previous day. The massive gain occurred as Transavia announced plans to close its operations in Denmark, Cimber Sterling’s base country, from 01-Nov-2010, although some routes may continue until 01-Apr-2011 to fulfil certain pre-arranged agreements with travel operators.

Transavia CEO, Michiel Meijer, stated the decision is due to the airline not meetings its targets for the first two years of operations, with local overcapacity making it too difficult to perform profitably. The airline entered the Danish market following the collapse of Danish LCC, Sterling, in 2008.

Cimber Sterling, a Danish LCC with main bases at Copenhagen and Billund, was formed out of a 2008 takeover by regional airline Cimber Air of the bankrupt LCC, Sterling Airlines. 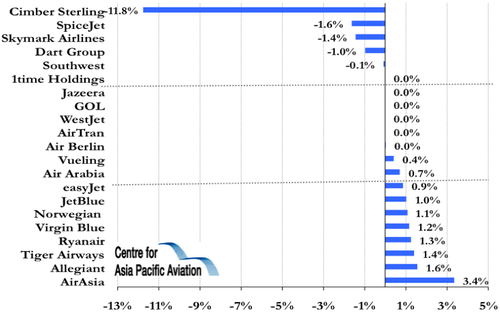