Airlines embarking on dual-brand full-service and low-cost strategies tend to place much focus on the low-cost unit. While discipline there is needed, often overlooked is ensuring the other component – the full-service carrier – can attain a yield premium and does not suffer as the LCC sibling gains ground.

This is the concern in Taiwan with TransAsia Airways, whose newly-named V Air LCC subsidiary comes with a logo depicting a smiling bear (with a heart for a nose) making a familiar peace-symbol pose, which may be too cute and cuddly for some but should bode well in the regional leisure markets V Air will target. The question is where that leaves TransAsia, whose brand is nondescript compared to V and whose markets are largely better suited to a low-cost operation than full-service. Scale is a challenge: Taiwan is a small market and TransAsia only has 11 jet aircraft while V Air intends to launch with three A320/A321 aircraft and grow by two aircraft a year. V Air could quickly overshadow TransAsia, or alternatively, trying to make both brands sustainable could artificially constrain V Air.

V Air in Mar-2014 announced its branding two months after unveiling its name, which has been left intentionally vague, with V Air saying in a statement: “V can stand for voyage, vision, vivid, or victory which symbolises the positive energy a new company requires and can help boost the public's preference and acceptance of the new company.” V Air's Chinese name however leaves a more definitive impression, with the Chinese name “Wei Hang” meaning “mighty airline” – an interesting branding distinction for the respective markets.

V Air's branding is a Formosan black bear, endemic to Taiwan and which have a white v-shaped pattern on their chest. V Air's bear logo further shows a heart-shaped nose while its fingers make the peace symbol. All together, the branding is kawaii, a Japanese term for cute and adorable objects – and V Air even acknowledges kawaii was a guiding objective.

While this branding may seem radical, there are two important notes.

First, kawaii is well accepted across genders and ages in the region, including Taiwan. EVA Air has a number of aircraft outfitted (externally and internally) in branding from Hello Kitty, another example of kawaii. LCC competitor Tigerair, which with China Airlines has JV Tigerair Taiwan launching in late 2014, re-branded from "Tiger Airways" to a softer "Tigerair" in 2013 in a bid to seem more friendly and improve its reputation. So V Air's playful image is in good company.

Second, whether the branding suits individual tastes or not, V Air is distinctly different from parent TransAsia Airways, helping to start the needed differentiation between full-service and low-cost brands in a dual brand strategy. 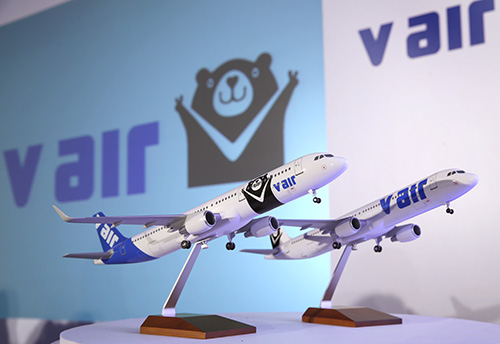 Softer branding should do well in Japan, Taiwan's largest inbound destination after China

V Air's kawaii approach should resonate well in Japan, which is not only Taiwan's largest inbound destination after mainland China but is experiencing large growth following the Japan-Taiwan open skies agreement. 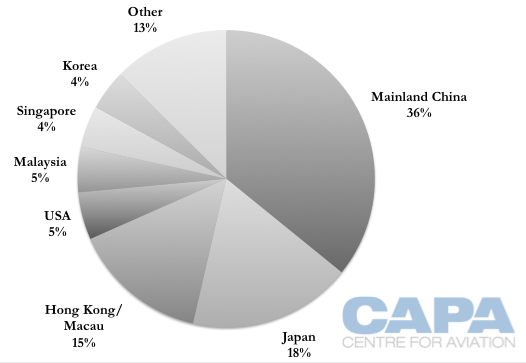 China Airlines, the largest operator between Taiwan and Japan, has led growth in scheduled capacity. EVA Air has also increased its position while TransAsia has doubled its Japanese capacity – but from a much lower base.

In northern summer 2014 TransAsia will have about 8,000 weekly seats to China Airlines' 39,000. TransAsia is the fifth largest operator between Taiwan and Japan, and is smaller than Cathay Pacific, which has fifth freedom rights. 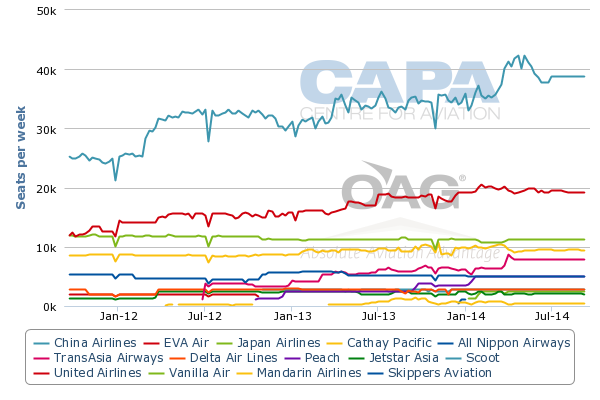 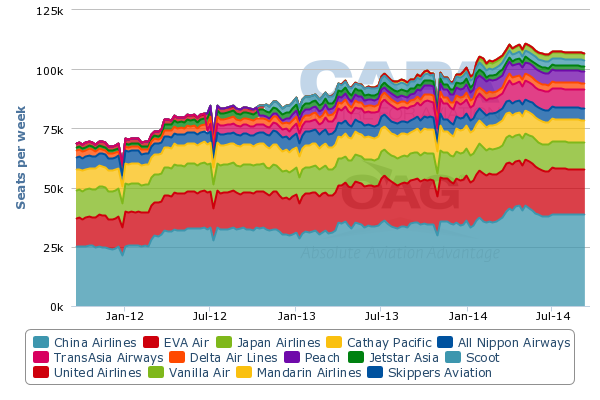 Peach also serves Kaohsiung from Osaka Kansai. Vanilla Air serves only Taipei from Tokyo Narita twice daily. Further growth is likely between the main cities, as well as from Taipei to other Japanese cities. There is demand from Taiwanese for LCC flights to Japan: Peach has reported that while on most of its international flights the majority of passengers are Japanese, on Taiwanese routes the majority of Peach's passengers are Taiwanese originating. Taiwan, unlike some Asian neighbours, generally holds Japan in high regard as Japan's occupation of Taiwan was peaceful. Cultural ties remain exceptionally strong. 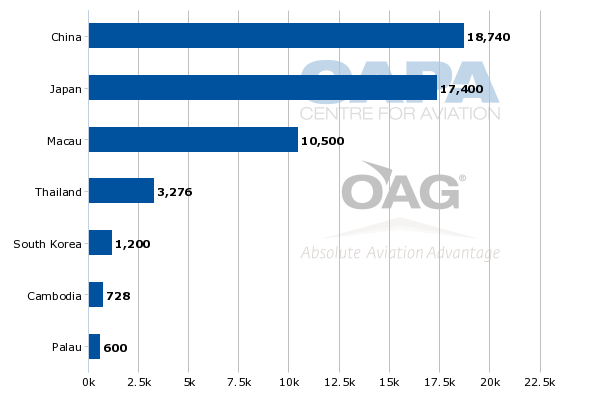 Japan is an equally strong market for Taiwan's overall outbound profile, with one of five Taiwanese nationals heading overseas going to Japan. 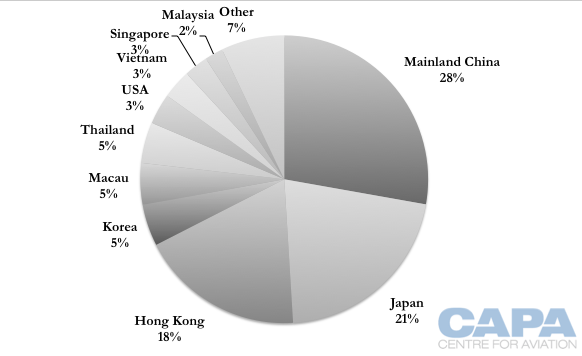 Further growth in this market is likely as capacity and new routes are added. Growth will also occur between Taiwan and mainland China, but it is a more nuanced market. Capacity remains tightly controlled and recent expansion has mainly been to secondary Chinese cities that have been challenging for airlines on both sides to make profits from.

Hong Kong-Taipei is the world's largest international route. As for LCC entrance, the route faces regulatory restrictions and TransAsia rebuffed its entry on the route (although with a full-service proposition) although China Airlines may be interested in deploying its LCC Tigerair Taiwan on the route. 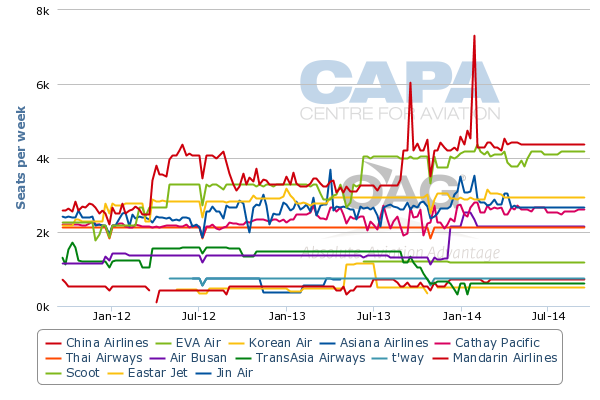 V Air in Mar-2014 said it intends to purchase an A321 for delivery in Apr-2014 in advance of an operational launch around Sep-2014. V Air intends to purchase another A321 and lease a third. Beyond this V Air intends to take two A320/A321 aircraft a year, a relatively slow growth rate for a LCC. The selection of the A321 bucks the trend of preference for A320s (or Boeing equivalent, the 737-800), but airlines are increasingly up-gauging narrowbodies and the limited slot environment at some airports could make larger aircraft more justifiable. V Air said the fleet will initially cover four to six destinations in North and Southeast Asia.

TransAsia has a low percentage of tickets booked through its website, although a planned reservation system upgrade should help to boost this. V Air seems to be taking a bolder marketing and online position, with signs of early rewards: in two months its Facebook page received 22,000 Likes compared to the much longer-established TransAsia page having 34,000 Likes at the end of Mar-2014.

China Airlines-Tigerair joint venture carrier Tigerair Taiwan is planning for an unspecified late-2014 launch with an initial two A320s, building to a fleet of 12 within two or three years – much faster growth than V Air is planning. However, the Tigerair Group's bullishness on prospects in Taiwan may be encouraged by its need for new markets to absorb aircraft, even after reducing its aircraft order.

Tigerair Taiwan plans to open a maximum of six routes initially, including to Japan, Singapore, Malaysia and Thailand. Profits are expected within three years, a longer time than at V Air.

China Airlines became engaged in LCCs after a very public discussion about the lack of LCCs in Taiwan (the largest absence of major Asian markets). 12 foreign LCCs serve 13 routes and in 2013, 2.3 million passengers travelled with LCCs to/from Taiwan, accounting for 5.9% of total traffic, an increase from the 930,000 passengers (3.5%) in 2012, according to regulator data.

EVA Air remains convinced that an LCC subsidiary is not suitable for it, citing the lack of opportunities – although V Air and Tigerair Taiwan see room. A major consideration for EVA Air is keeping its eye on the main game: how to balance a very rapidly increasing long-haul North American network that requires connecting traffic from around Asia. But there is a danger that not taking the risk of LCC establishment is greater than the risk of limiting future options.

TransAsia to seek new markets, but differentiating with V Air will be challenging

There is little doubt V Air can find markets to serve successfully. North Asia holds many opportunities, as does Southeast Asia, although the latter is more competitive. V Air has mooted Bangkok, Osaka and Tokyo as initial destinations. All three are currently served by TransAsia, which immediately goes to the heart of TransAsia's V Air plan: how will dual brand strategy be applied?

The case for full-service regional-only (point to point) international carriers is weakening. Asiana and Cathay Pacific in recent times have signalled concerns about the outlook for the economic viability of regional services; for them the services are sustained by long-haul connections, which TransAsia lacks.

TransAsia does have a small fleet of two A330s it plans to use on long-haul flights, but this is not guaranteed success. TransAsia has again affirmed its intent to open long-haul routes, but this plan seemingly risks fragmentation and loss of scale as two A330s require a regional network that will overlap with – or be better served exclusively by – its V Air LCC brand. TransAsia has only a 5% share of Taiwan's international market. 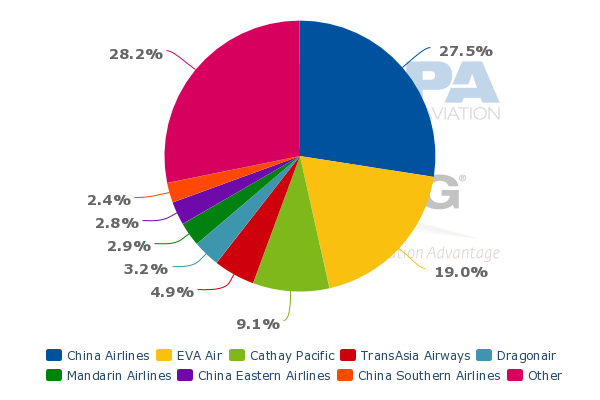 TransAsia has said with the launch of V Air that TransAsia will find new markets as well as markets that can accommodate both full-service and low-cost V Air. This task is easier for China Airlines, which has a sizeable regional network as well as growing long-haul operation. TransAsia-V Air integration could have been an option by pursuing a hybrid path, although this entails complexity beyond that of a LCC, as well as the challenge of stripping costs out of an existing business.

Nonetheless, TransAsia's LCC move was surely the right one, for itself and Taiwan: TransAsia's agitation for the ability to establish prompted China Airlines to launch its own LCC.

TransAsia's risks seem to be launching the LCC growth vehicle while retaining the older and more prestigious full service operation. Its kitchen may not have room for two cooks.

There will be a need for constant review and refinement of the progress of what is inevitably an experiment in dual brand operation – just as it has been for other full service airlines going along this route. Every case is different, but there are now many places to look for precedents. TransAsia will make mistakes; the key to success will be acknowledging them and being ready to make adjustments quickly.