United Continental Holdings/All Nippon Airways and American Airlines/Japan Airlines each launched their trans-Pacific joint ventures on Friday. Through their global alliance connections, the carriers will coordinate sales and marketing and align schedules, fares and terms and conditions for itineraries, enhancing operations across the Pacific.

Despite short-term challenges in the Japanese market, the agreements are major long-term partnerships. Shares in ANA were down 2.4% in trading on Friday, while Japanese LCC Skymark Airlines was down 3.4%

Qantas plans to sell 21 B737-400 aircraft, cutting capacity due to weaker-than-expected demand and high jet fuel prices. The aircraft could reportedly fetch AUD20 million each. Qantas is also selling a 20-year-old B767-300, in addition to the early retirement of two other B737-300s announced last week. Qantas shares were unchanged on Friday.

Philippine Airlines' ground crew union, PAL Employees Association (PALEA), said its 3700 members may go on strike at any time despite a certification order signed by Labour Secretary Rosalinda Baldoz that barred the work stoppage. PAL is ready to implement contingency measures to minimise flight disruptions, but is also ready to exercise its legal options in case any work stoppage is declared illegal by authorities. Philippine Airlines shares were flat in trading.

Major share price movers included Australia's Skywest Airlines, which jumped 8%, and India's Kingfisher, which rose 10.2%. Kingfisher was up despite a 1.4% increase in fuel prices by the Indian Oil Corporation. Jet Airways gained 3.1% while SpiceJet was up 1.2%. 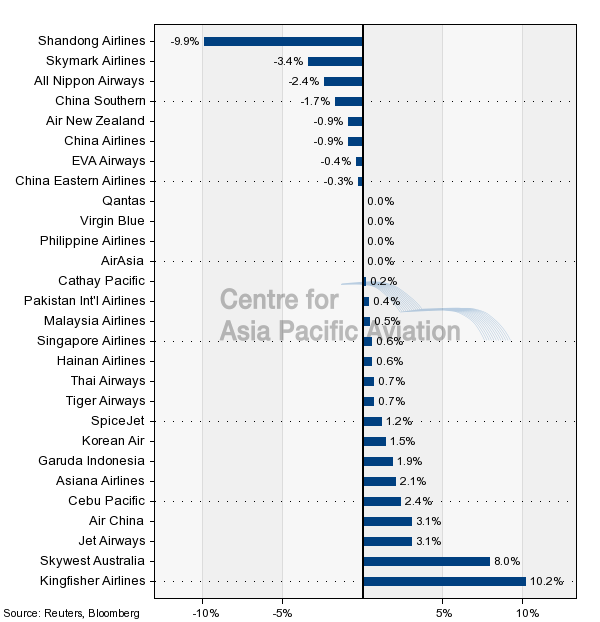