IATA reported that international air travel and air freight markets slowed in Aug-2010, with air travel volumes (RPKs) slowing from a revised 9.5% year-on-year growth rate in Jul-2010 to 6.4% in August. Airfreight volumes (FTKs) slowed from 23% to 19.6%. However, global passenger traffic is now 2% above pre-recession levels of early 2008 with global international cargo traffic 3% above the pre-recession levels.

IATA Director General and CEO Giovanni Bisignani said: "The rapid improvements in demand that we saw earlier this year are behind us. The slow down of demand in August is consistent with our forecast for a tougher end to 2010 as government stimulus monies run out without having generated significant improvements in employment. The bounce from re-stocking is over. We do not yet see the strong consumer confidence needed to sustain the expansion with spending.

"While economic indicators remain positive in emerging markets, many of the factors that have driven recovery in major western markets thus far are now tailing off. Government stimulus is being replaced with austerity budgets and inventory restocking has largely been completed. While business confidence remains relatively high, consumers in developed markets have yet to recover and still remain saddled with high levels of debt and face uncertain employment prospects. Material improvements in consumer confidence – a key driver of travel market growth – are likely some way off, although in the absence of another external shock, significant decline is not foreseen. This weak economic outlook is now being reflected in a slowdown in travel market growth rates. This slower growth phase may persist for some time, however a renewed decline is not expected."

Further explaining the slowdown, IATA said it was exaggerated by the comparison with last August, a period where air transport markets were expanding rapidly in a post-recession rebound. The rapid rise in transport demand during 2H2009 will substantially reduce year-on-year growth rates during the remainder of 2010 even if there is no month-on-month decline.

Highlighting the slowdown in traffic growth, IATA reported that in Aug-2010, there was a reduction in air travel and air freight compared with seasonally adjusted levels in Jul-2010, with air travel 1% lower and air freight 0.8% weaker. In passenger markets, month-on-month were seen across all regions although were larger in Asia/Pacific, Latin America and the Middle East than those seen in Europe, North America and Africa. Changes in freight volumes were mixed.

Traffic increases in Aug-2010 but down seasonally adjusted 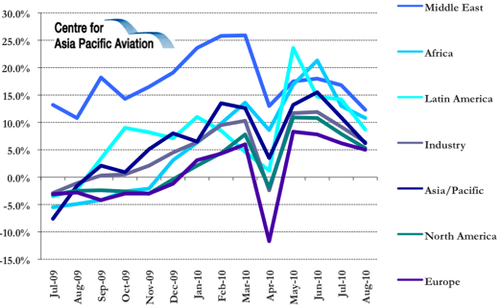 During the month, traffic (RPKs) growth occurred at a faster rate than capacity (ASKs) growth of 5.5%, following a trend seen throughout 2010 – since Dec-2009, air travel volumes have expanded by 4.3% while capacity has risen by 6%. 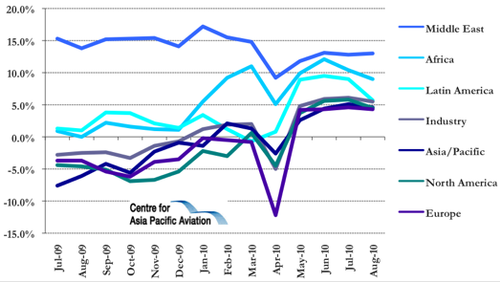 However, while demand is slowing capacity is now accelerating. Since Dec-2009, air travel volumes have expanded 4.3% against a 6% rise in capacity.

Passenger load factors are still high, standing at 81.6% in Aug-2010, but they have slipped by 1.5 ppts since peaking in February in seasonally adjusted terms, with the strong load factors of 1H2010 slowing in the second half. This is a concerning trend moving forward, with the rate of capacity introduction now accelerating while growth rates are looking to be slowing, which will begin to affect load factors. 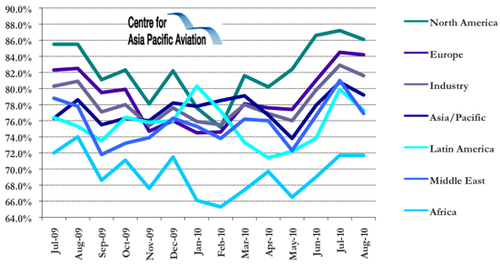 Global international cargo traffic in Aug-2010 was 3% above the pre-recession levels of early 2008, with gains of 19.6% on a year-on-year basis, highlighting the strong rebound in world trade in the post-recession period.

However, this is slowing: During 1Q2010, air freight grew at an annualised rate of 25% with this slowing to an annualised growth rate of 12% in the first two months of the third quarter (freight growth stood at 23% last month). This means that freight volumes actually fell slightly during the month, down 0.8% on a month-on-month basis.

This slowdown is occurring as the restocking phase of the inventory cycle is now complete, meaning growth rates are shifting back towards trend growth in world trade of around 6%. Freight markets are still growing but at a significantly slower pace, with deceleration a key trend to be expected over the coming months as freight markets return to more normal rates.  However, it should be stressed that freight markets are still in a growth mode and another dip is not expected

The patterns of recovery are also shifting. Freight volumes carried by Asian carriers have increased by 3.8% since Jan-2010 while European and North American carriers have seen a 6-8% expansion over the same period. Several drivers are contributing to this shift, including weaker currencies in the US and Europe (which are supporting export growth and improving the competitiveness of US and European carriers) and a reduction in import activity in Europe and the US which is dampening the demand for finished goods manufactured in Asia. Asian carriers are the largest participants in global cargo markets with a market share of 44%. 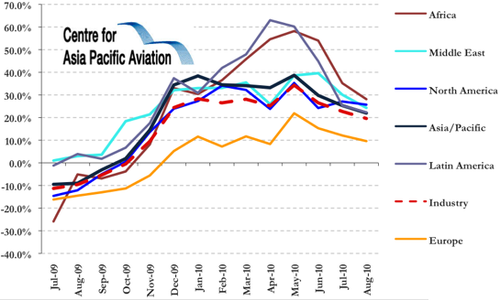 Meanwhile, freight capacity is now matching demand trends which are stabilizing. Since Dec-2009, the freight volume expansion of 9.2% has been matched by capacity expansion. After a rapid improvement throughout 2009, freight load factors have leveled off at 51.0%. This may slow the improvements in airline profitability from the pace seen during the 1H2010.

Regional patterns are now changing for air travel and freight. During 2009 airlines in Asia Pacific and Latin America saw very strong post-recession rebounds, while Europe and North America lagged. However, since the start of 2010 the situation has reversed with a leveling off in growth for Asia Pacific and Latin American airlines but some acceleration in traffic carried by European and North American airlines. This seems to be driven by the improvement of export volumes from Europe and North America, and associated business travel, coupled with weaker imports into these regions which have led to a corresponding weakening of exports from Asia.

Traffic and profits to slow in 2011; capacity to put pressure on yields

Slower growth is consistent with IATA’s recently revised global industry outlook, with the industry now expected to post a profit of USD8.9 billion (up from the Jun-2010 forecast of USD2.5 billion) based on an exceptionally strong first half of the year. However, Mr Bisignani commented that the industry remains financially fragile, with ticket prices remaining depressed due to strong global competition.

The slower demand growth in the second half is expected to continue into 2011. The concerning trend here is that capacity increasing faster than demand, yields are not expected to grow, with this tougher revenue environment meaning profits are expected to reduce in 2011 to USD5.3 billion.

Mr Bisignani cautioned: “On USD560 billion in industry revenue, our margins are just 1.6%. Having a bigger black number on the bottom line is good. But we must also be realistic in understanding that the profitability is fragile. And the August results are a reminder that as we move into 2011, we are expecting a more challenging revenue environment."