Tiger Airways yesterday stated it obtained approval from the French Export Credit Agency (ECA) to support the purchase of nine A320 aircraft.

Standard Chartered Bank is mandated as the Lead Arranger for the ECA financing relating to these aircraft. The transaction is currently in the documentation phase and is expected to close upon delivery of each aircraft. The nine aircraft are scheduled to be delivered over the next six months through until Mar-2011 increasing the carrier’s owned fleet to 11. From now until Mar-2011, Tiger Airways will also return two older aircraft currently leased. This means that it will be operating a fleet of 26 aircraft, of which 11 (42%) will be owned. Shares in Tiger slipped 1.5% yesterday.

In other Asia Pacific LCC news, Philippine Stock Exchange (PSE) yesterday announced it had approved Cebu Pacific’s IPO. The carrier plans to hold the domestic offer on 12-Oct-2010 to 19-Oct-2010, with a tentative listing date set for 25-Oct-2010.

The carrier will now hold a domestic roadshow on 24-Sep-2010 and international roadshow and bookbuilding on 27-Sep-2010. CEB plans to offer 186.6 million common shares at a price of no more than PHP150.00 per share. It also has an overallotment option of up to 28 million shares. The carrier plans to distribute 70% of the shares to international investors, with the remainder to be sold to domestic investors.

Jetstar CEO, Bruce Buchanan, confirmed the airline had been involved in preliminary discussions with Dunedin International Airport. The carrier added that more domestic destinations could be added before the 2011 Rugby World Cup. Meanwhile, Australia and New Zealand CEO David Hall stated the carrier needs to double its market share in domestic New Zealand to keep its operations in the country sustainable. He declined to comment on whether the operations are profitable at present, but stated he was confident the airline would be able to fill its new announced capacity in the country, to be introduced from Feb-2011. 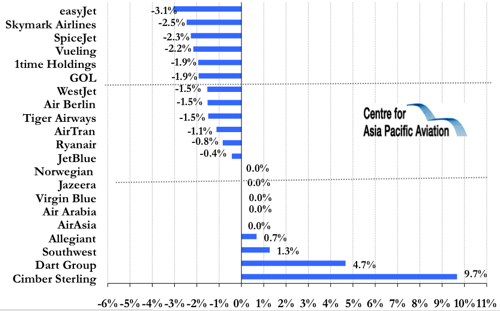