It has been a good week for Tiger Airways’ Singapore operation, announcing plans to serve Taipei and to boost frequencies to the key destinations of Guangzhou, Hong Kong, Macau, Shenzhen. Tiger has also gained coveted rights to operate twice daily to Jakarta.

Rosalynn Tay, Managing Director of Tiger Airways Singapore, said: “This expansion will be supported by our fleet increase from 10 to 14 by December 2010. We look forward to announcing more services that our increased capacity enables.” She added: “Our existing routes have been very well received by both business and leisure travellers, and Singapore has also been attracting more tourists after the opening of both Integrated Resorts.

On 19-Jul-2010, the airline announced plans to double Singapore-Jakarta frequency to twice daily from late 2010, reporting an average load factor on the route of 85% last financial year. The additional flights will go on sale soon. Tiger stated it won the additional rights from other airlines (including rival Jetstar Asia) under a recent distribution of traffic rights by Singapore’s Air Traffic Rights Committee (ATRC).

The ATRC was established in late 2003 to allow the entry of new Singapore carriers. The committee is headed by an official from the Ministry of Transport and includes representatives from the Singapore Tourism Board, Economic Development Board, International Enterprise Singapore, Attorney-General's Chambers and the Civil Aviation Authority of Singapore. The ATRC does not have a website and does not make its route awards public.

Tiger Airways’ share price has risen sharply over the past week and is now well above its IPO price, gaining a further 1.6% yesterday. 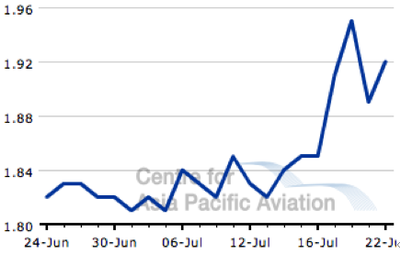 In the US, JetBlue’s shares soared 8.5% as the carrier revealed a strong increase in 2Q2010 net profit. See related report: JetBlue’s 2Q2010 net rises to USD30 million - but expanding too rapidly? 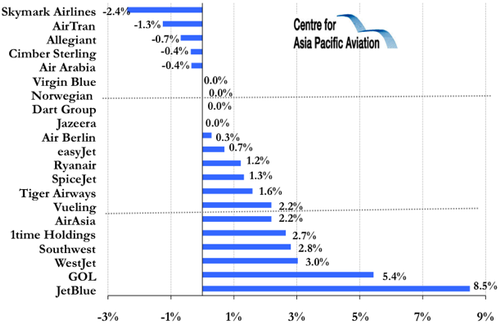