Tiger Airways suffered its largest share price slump since its was floated seven months ago, falling 7.6% on Friday as the carrier’s earnings in the three months ended Jun-2010 failed to meet investor expectations. The carrier’ shares have risen 40% since its IPO in Jan-2010.

Tiger Airways CEO, Tony Davis, declined to comment on whether the Australian business broke even in the quarter stating: ''There is no benefit to me or my shareholders in giving our competitors the detailed breakdown of our businesses''.  He commented however that its performance had improved on a year-on-year basis.

Macquarie Equities has downgraded the stock from ''outperform'' to ''neutral''.

In the South Korean market, shares in Korean Air gained 3.0%, while Asiana Airlines was 0.6% stronger on Friday, as both carriers reported increased international traffic in Jul-2010. 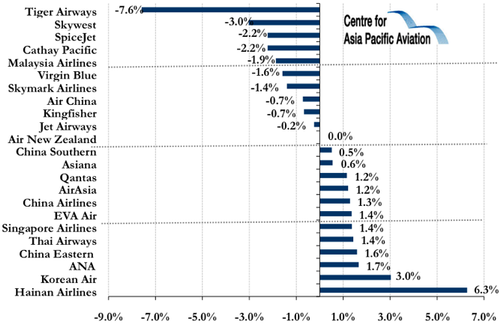