Tiger Airways Group has turned around its operations from last year, to post a valuable profit of SGD28.2 million for the 12 months to 31-Mar-2010. The carrier was recently listed, and labelled the result a clear indication of the success of its “pure” low cost model. And, while average fares have dipped significantly, ancillary revenues have kept the per-passenger revenue line steady, just as load factors strengthened significantly.

Revenue increased by 28.6% for the year, to SDG486.2 million, as capacity (ASKs) increased by 21.5%. Tiger’s Australian operations nearly doubled their contribution to overall group revenue, increasing from SGB110 million in FY2009 to SGD208 million in FY2010. Importantly, the Australian operation is now at breakeven status, according to Tiger Airways Group CEO, Tony Davis. In the process, Australian domestic discount fares have slumped 26% over the past year.

Passenger numbers were up by 53.8%, while actual flown revenue passenger km (RPKs) increased 29%, as the group cut back its average sector length over the year by nearly 250 km. 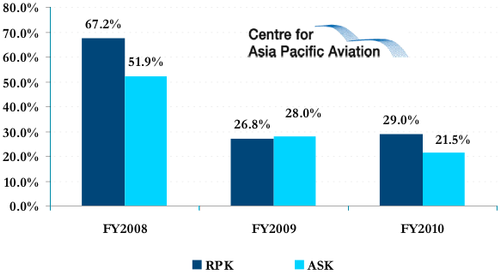 Unit revenue (Revenue per ASK) was up 6%, as the carrier continues to accumulate economies of scale and synergies between its Singapore and Australian operations.

Tiger has slashed baseline fares by nearly 40% since FY2008, triggering a 5 percentage point increase in load factors over last year. 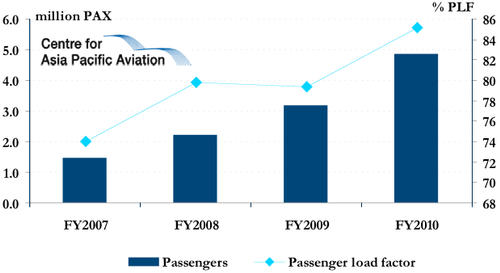 However, while Tiger's average fares have declined, the carrier has been able to claw back some of the lost ground in the form of stronger ancillary revenues. Since FY2007, ancillary revenue per passenger has increased more than sevenfold, jumping more than 20% over the past 12 months. 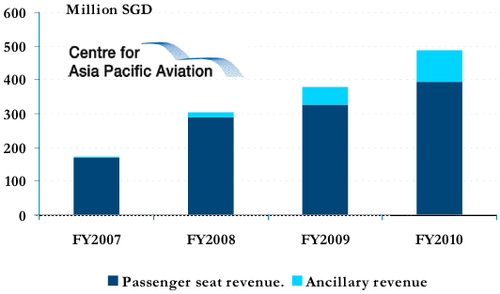 While costs have remained steady

Ignoring the impact of fuel, unit costs have been remarkably stable for the carrier, especially considering the heavy expansion it has been pursuing over the past few years. CASK ex fuel was essentially stable between FY2009 and FY2010, and is up less than 10% over the past four years. 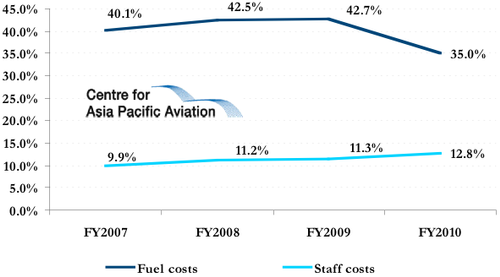 The carrier’s fleet has now grown to 19 aircraft, ten in Singapore and nine in Australia, with resultant increases in MRO, aircraft rental, route charges and airport handling costs.

Staff costs also increased, although not to the extent that they have in previous years.

A comforting result - and a major market impact

The relatively strong result would appear to vindicate the Tiger strategy in attacking the low price end of the market. In a tight and competitive climate, turning in a profit is an achievement. Tiger does not have a similarly low cost profile to AirAsia's world benchmark levels, but it is managing to generate yields that justify the model. While generally containing costs, fares have been slashed, yet most of the reduction has been restored through improved ancillary yields. The results do not break out the respective market performances of Asian and Australian operations however.

The carrier's small but expanding presence in the Australian market - competing aggressively with Jetstar - has certainly served to push discretionary fares to new lows. The Australian Bureau of Infrastructure, Transport and Regional Economics (BITRE) yesterday released its Domestic Air Fare Index for May-2010, which showed the Best Discount Fare Index for domestic travel fell a remarkable 29.0% year-on-year to yet another all-time low of 50.1 in May-2010 (where Jul-2003 = 100).

This will be cause for concern for all of Tiger's competitors.