Tiger Airways Holdings posted a 60% jump in net profit for the three months ended Dec-2010 to USD17.6 million on the back of rising passenger volumes and higher average fares. The carrier, 34.4% owned by Singapore Airlines, also reported record passenger numbers and load factors in 2010, due to a sharp recovery in Asia Pacific traffic.

Source: Centre for Asia Pacific Aviation and Tiger Airways
^ When compared with the period ended 31-Mar-2010
* Based on the conversion rate USD1 = SGD1.2872

Recent bad weather to have 'adverse impact on earning'

However, despite the strong result, the carrier noted that the recent weather events on the east coast of Australia would have an “adverse effect” on earnings for Tiger Airways Australia, and hence the group, in the fourth quarter. As a consequence, plans to increase the fleet beyond 10 aircraft in Australia have been deferred until Apr-2011 although Tiger Airways Australia will increase its seat capacity by at least 20% for the period Apr-2011 to Oct-2011.

Given the growth opportunities in Asia, Tiger Airways Singapore will increase capacity by 41% year-on-year for Apr-2011 to Oct-2011 period. The company is maintaining its plan to grow its fleet by 40%, from 25 aircraft currently to 35 aircraft by Mar-2012. The airline, as usual, did not break out the figures for its Australian operations for 3Q2011.

Tiger Airways reported an operating margin of 15.6% in 3QFY2011, a net profit margin of 13.3% and a profit before tax margin of 18%. Tiger Airways Group President and CEO Tony Davis said: “Achieving an 18% profit before tax margin in the third quarter demonstrates our focus on delivering a profitable and sustainable expansion of our business. By managing to generate revenue growth ahead of seat capacity growth whilst keeping a tight control of costs shows that we have right formula to create shareholder returns.” 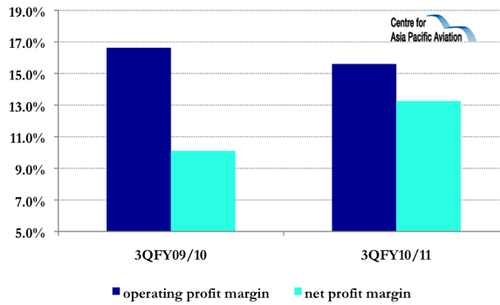 While revenue increased 22.2% to USD132.4 million, operating costs increased at a faster pace, up 23.6% to USD112 million, driven by a 31.5% increase in fuel costs, which compared with 38% of the carrier’s total expenses, and a 42% increase in labour costs. Cost per available seat kilometre (CASK), excluding fuel and foreign exchange, declined 3.2% while unit revenue increased 0.4% in the quarter. Average passenger fares increased 4.6% to USD71.71. 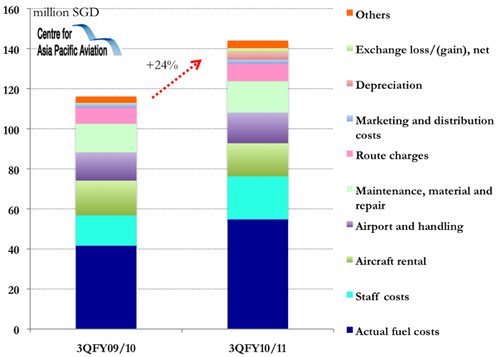 Ancillary revenues increased 38%, up 20% on per pax basis

Ancillary revenue growth of 20% on a per passenger basis reflected the carrier’s continuing focus on ancillary revenue development. Overall, ancillary revenues increased 38.2% year-on-year in the quarter to USD26.8 million, or 20.2% of total revenues, up from 17.8% in 3Q2009. During the quarter, the carrier launched Stripes, its membership programme providing members with priority access to promotions for an annual membership fee. The carrier added that it would “continue to look at ways to generate further growth in ancillary income going forward”.

From its Singapore base, new services were launched to Trichy and Trivandrum in India and to Manila during the quarter, while in Australia the carrier launched its third domestic base at Avalon Airport in Nov-2010 with seven new routes. The carrier also increased daily frequency to Hong Kong and Ho Chi Minh City in Dec-2010 while Singapore-Bangalore services were suspended from mid-Nov-2010.  In Dec-2011, the carrier also established its Airline Partner Programme with South East Asian Airlines (SEAir) based out of Manila (Clark), which are expected to provide “significant” operating cost savings going forward. The carrier confirmed it is “exploring opportunities to expand this partnership on routes beyond the current Manila (Clark) - Singapore route”. Subsequent to the end of the quarter, Tiger Airways Singapore has added a new daily service to Taipei from Jan-2011

Fleet wise, the carrier took delivery of five new aircraft and extended the lease of two leased aircraft in the Dec-2010 quarter. Tiger Airways Holdings Limited, in Dec-2010, stated that of proceeds raised from the company’s IPO approximately SGD15.5 million (USD12.1 million) has been utilised to fund the acquisition of aircraft and associated aircraft pre-delivery payments.

However, Tiger Airways has complained that regulatory barriers is preventing its growth from reaching its full potential. Mr Davis this month complained that the regulator barriers to expansion in Asia were "ridiculous". The CEO said airlines are forced to work around protectionist regulations “that are a hangover from World War II”. He stated regulator barriers, combined with the lack of suitable infrastructure at appropriate prices for LCCs, have prevented Tiger from growing as fast as it would like.

Meanwhile, the rivalry between AirAsia and Tiger Airways will continue as Thai Tiger enters the market in 1Q2011, the carrier’s go head to head in the Philippines - Tiger with its SEAIR partnership and AirAsia with its Philippines JV - and the number of overlapping routes between the two carriers grows. AirAsia enjoys a first mover advantage across the ASEAN market, but Tiger will make inroads as more JV subsidiaries come on stream. Tiger is also looking beyond ASEAN to the significant opportunities that exist in North Asia.