With solid results for the first quarter – to 30-Jun-2010 – of the new financial year to 31-Mar-2011, Tiger Airways appears to be positioning itself well in a competitive marketplace. Although there is no detailed breakout of the Tiger Australia operation, this appears to be starting to pull its own weight. But the strength in the airline is clearly still in the Singapore based airline. As one of the lower cost operators in the region, Tiger’s expansion regionally will be a key to long term success. With the proposed new Thai operation, Tiger is establishing itself as a likely major force in the region, with the potential eventually to become one of three large non-flag carrier operations, along with AirAsia and Jetstar.

Results in a nutshell

Revenues have been climbing more or less in proportion to the airline’s expansion. 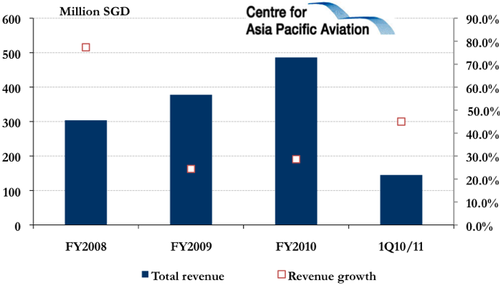 Profitability on a good track

So the first six months of this calendar year have seen the carrier establish itself modestly in the black – and much more happily than in the previous year. 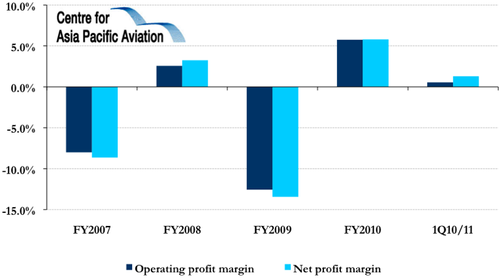 Ancillaries steady at 20% of gross; ticket prices up slightly

Ancillary charges, a vital part of any LCC’s operations today, remained steady as a proportion of total revenue, at 20.0% as compared with 1QFY2009/10.

Crucially, ancillary revenue per passenger has risen by 4.1% to SGD19.27 in the latest period. The revenue numbers also contained a slight increase in average ticket price across Tiger’s operations, from SGD 74.20 to SGD 77.40 cents. 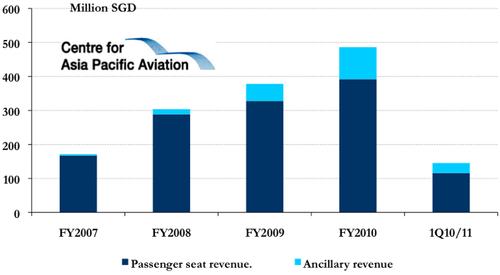 It would appear that Tiger’s more aggressive approach to growing ancillaries means there is upside here, but it is a positive that average fares have maintained prior levels as the carrier has expanded fairly aggressively during the period.

One effect of the Australian operation’s expansion over the past year has been to reduce average sector length, which means unit costs will generally increase. This has diluted Tiger’s clearly solid attempts to contain costs overall, leading to a significant increase in CASK year on year, from SGD5.16cents to SGD6.38cents.

At current exchange rates, this is equivalent to USD4.71cents per available seat kilometre, or USD7.58 per mile.

Meanwhile, for the comparable period, the impact of higher fuel prices this year has weighed heavily, with fuel costs up from SGD32.3million to SGD56.4million, well ahead of the increase in ASKs (from 1,943million to 2,263million). 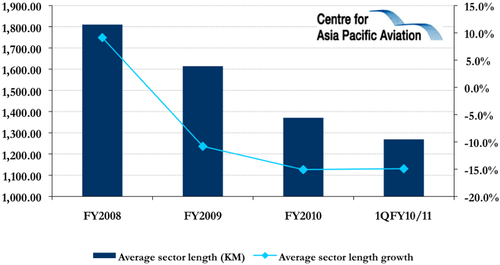 Tiger’s share price has continued to strengthen since its partial float in an IPO in Jan-2010. Despite listing at what was generally considered an unpropitious moment – with doubters apparently being proven correct, as the share price subsequently dipped - Tiger is so far proving to be a valuable investment. 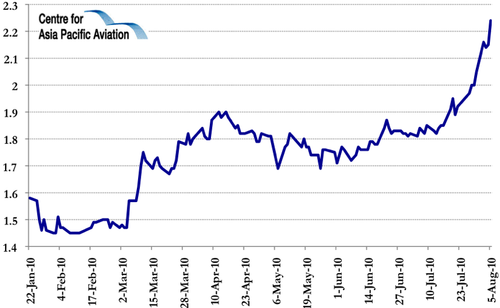 Over the same period, part owner Singapore Airlines’ shares have also climbed as the market has regained strength, albeit, as a much larger carrier, nowhere near by the same percentage as Tiger. 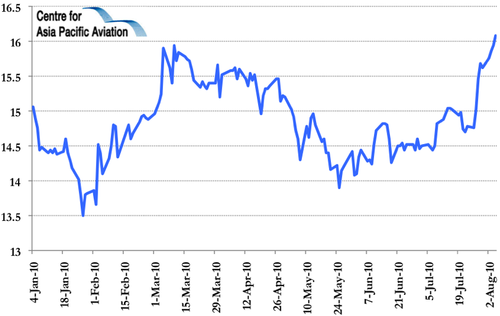 The new/proposed “Thai Tiger” joint venture with Thai Airways and other Thai investors, as noted by CAPA earlier this week, offers Tiger a potential platform to expand its regional presence significantly – especially as a relatively rapid expansion would appear to fit well with Thai Airways’ own plans. Few details have yet emerged – for example issues like the LCC’s freedom to determine which routes it will offer, a constant cause of dissent between Thai and part-owned Nok Air. But the venture is in principle to begin in 1Q2011.

Tiger has another nine aircraft arriving in its overall fleet during the coming financial year (to 31-Mar-2011), although the return of two leased aircraft will reduce the increment by two, leaving a net seven additional A320s, for a total of 26.

As new opportunities for operations emerge, this will reduce the risk exposure for Tiger’s fleet allocation – thus eg allowing movement of aircraft between the respective bases in Australia, Singapore (where international rights are hard to come by) and, in future, Thailand.

This fits well with the Group’s proposed fleet expansion, with growth ramping up in calendar year 2012. 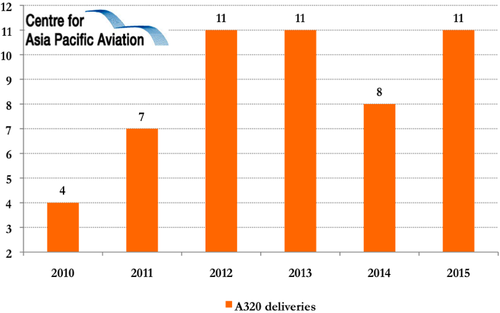 In the short term, Singapore is to receive more aircraft, on the back of the Singapore government’s recent decision to withdraw some of Jetstar’s rights into Indonesia in favour of Tiger. As Tiger Airways’ President and CEO, Tony Davis notes: “Going forward, we are capitalising on the strong economic growth and visitor arrivals data out of Singapore by committing to a 40% increase in the Tiger Singapore fleet over the next six months.”

Tiger Airways announcement contains the fairly bullish assessment of the overall outlook, and of Tiger’s: “The improving economic environment in the Asia Pacific region provides the basis for continued expansion of our existing operations. In terms of market conditions, Mr Davis stated that “In the near term, forward bookings continue to be firm and in line with the recent trend.” This is a positive, despite recent softening of the Australian domestic market in particular.