Tiger Airways’ shares surged 4.2%, as the carrier reported a 45% increase in revenues in the thee months to Jun-2010 (to USD107 million), with a return to profitability at both the operating and net levels (to USD591,000 and USD1.4 million, respectively).

Shares in AirAsia soared 10% yesterday, to more than a 30-month high, buoyed by the carrier’s decision to defer the delivery of seven aircraft.

AirAsia Group CEO, Tony Fernandes, commented: “Our share price is beginning to show its true potential, but, once people start analysing properly after the second quarter, they will see even more value”.

While the market reaction was favourable, analyst commentary was mixed. Some analysts commented that the deferment would enable the LCC to optimise its fleet capacity while reducing capital expenditure and net gearing, while others saw the decision as allowing the market to absorb the available capacity.

ECM Libra Investment Research estimated the impact of the deferrals to be a 2.2% increase in FY2011 earnings per share as lower interest expenses and depreciation outweighs capacity cutbacks. However, FY2012 earnings per share will be reduced by 3.6%”.

Meanwhile, Kenanga Research commented: “Although the fleet expansion will be relatively less aggressive for FY2011, AirAsia could benefit from lower operating and fuel costs from this deferment and perhaps this will allow the group’s internal restructuring, such as listing of its associates, and solve the overhang issues in its balance sheet”.

Meanwhile, OSK Research downgraded AirAsia from “buy” to “neutral” as a result of the deferrals, with a target price of MYR1.60.

Shares in China Airlines and EVA Airways gained in Taipei Trading yesterday, on reports that Taiwan and China Mainland would resume talks on additional cross-Strait services on 05-Aug-2010. EVA shares reached an intra-day high during morning trading, for the highest share price level since 03-Jul-2010, closing the day 6.8% higher, while China Airlines shares gained 0.5% by day-end, reaching its highest level since 26-Jun-2008 during intra-day trading.

Shares in Cathay Pacific gained 4.5% in Hong Kong trading yesterday, the biggest gain in almost eight months, after CEO, Tony Tyler, commented that reservations are "looking very good" as a rebounding economy revives travel demand. Mr Tyler said: “We can look forward to the next six months with some confidence. Forward  bookings are looking very good for the rest of the summer. Cargo is looking good for the rest of the year”.

See related report: Cathay Pacific: No time to get excited, but performing better over long term than Singapore Airlines 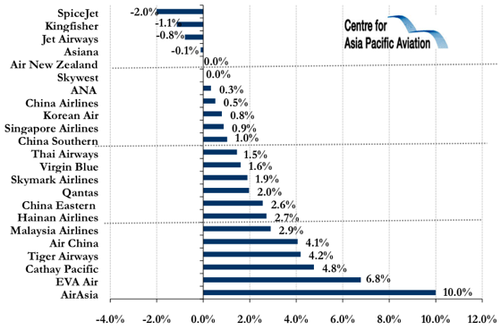