The premium traffic decline. A fragile recovery for Europe and North America at best

After a lot of relatively positive noises about the economy generally, the worldwide figures published by IATA for premium travel trends suffered a setback in yesterday’s September results, where “passenger numbers fell a couple of percentage points during September, as the recent upturn in both major economies and air travel encountered an area of turbulence.”

Unlike recent months, where declines in traffic growth had been gradually lessening, the Sep-2009 numbers were cause for a rethink. That is, the declines declined even further, even against weak figures in the comparable month last year.

The culprits in this global equation were Europe and the North Atlantic, which still account for the bulk of world traffic: “The fall in premium travel numbers in September was driven by declines in the large markets of within-Europe and North Atlantic premium travel, where numbers were down 26.9% and 10.7% respectively compared with declines of 20.5% and 7.8% in August.”

Asia and the Middle East performing much better

But the poor result was not worldwide. Asia and the Middle East performed better than the average, continuing a more positive trend. “The differences in the geographical spread of economic recovery are reflected in travel markets.  Economies have been improving most rapidly in emerging Asian countries.  The same was true with both premium and economy travel; within Far East passenger numbers were up 6.7% in September and there were significant improvements in Pacific and Europe-Far East markets.  Markets in the Americas and in the Middle East also improved,” the report concluded. 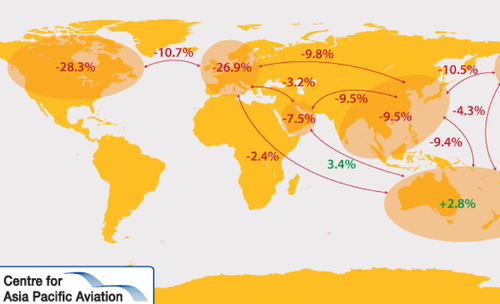 The year to date figures (below) tend to round out the trend, showing that, whatever the improvement recently, there is still a significant haul even to recover the ground lost last year. It also highlights those routes where negatives are greater most recently – for example, north America, where the year to date shows a decline of 20.4%, against a much worse 28.3% fall in the latest month. By contrast, the greatly improved result for intra-Asia (-9.5% vs -25.8% for the year to date) points firmly in the other direction. 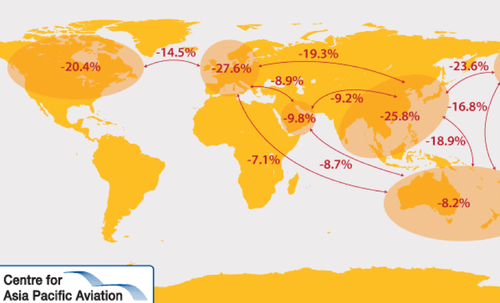 What does the reversal mean?

One month’s data are not enough to cause a rewrite of the recovery, even if it is a weak one. And that may be the reason; this is at best a fragile period for Europe and north America. Yesterday’s extremely gloomy interpretation of events by the European airlines’ AEA, testify to that, even if the airlines are looking for government sympathy.

As the following graph shows, the north Atlantic had improved in Aug-2009, even against a stronger (10%+) growth in Aug-2008, whereas this year’s weaker September figure was already low in the previous comparable month of 2008.

Compared as they are against a weak month in Sep-2008, the latest poor premium results still sound a warning alarm about the economic recovery – and the way it will affect the airline business. The sober voices that talk of a long slow recovery for the airline industry should be cause for reflection. 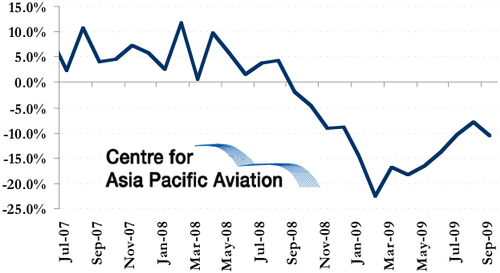 Premium traffic in the Middle East has not been immune to the downturn, but for most routes involving the region, traffic is now either down less markedly or actually up year on year. The pattern in the region is due partly to the way many airlines have reallocated their fleets into the region. But there is also some evidence that yields are holding up, despite the influx. Nonetheless, most route groups are still well down, even measured against he negatives of Sep-2008. 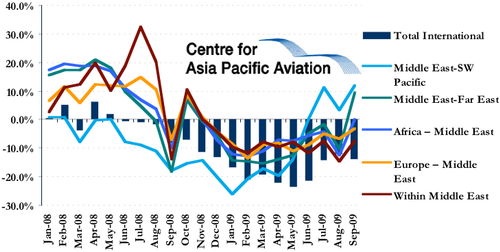 A stronger Latin America too

Central and South American markets have also shown resilience throughout the downturn. As IATA notes, “Another notable improvement was in Central America, which had been hit severely by the impact of influenza A (H1N1).  With central America travel numbers were down just 2.3% in September, a dramatic improvement on the 33.9% fall in August.  There are concerns however that this flu strain could become more severe during the Northern winter and resume its damaging impact on both health and travel.

Also, further south, “A number of the South American economies have been resistant to the worst of the global recession and have started to grow once more.  Travel within the region is reflecting this relative economic improvement.  Within South America travel numbers were up 2.1% in September, with premium travel up 1%, compared with declines of over 9% the previous month. “

Important to measure new figures against the 2008 base months

At this stage of the sequential analysis of premium traffic figures, it gets more important to recall the base numbers on which the year-on-year comparisons are made.

Until Jul-2008, premium traffic had been holding up reasonably well. But already by then Asia Pacific premium travel was shaping steeply downwards. Globally, as we reported in Sep-2008, “Worldwide premium demand fell 1% in Jul-08, following a -0.4% fall in Jun-08 and average growth of 1.5% during 1H08.”

By this stage, there was not yet any realistic possibility of understanding the massive slump which waited around the corner. Back then, “IATA stated there is likely to have been some switch in business travel from premium to economy, "but all the evidence suggests this is a relatively price-insensitive sector".

However, this time was to be different from any other in history.

By Aug-2008, the decline was well entrenched – still, at this stage driven mostly by the underlying effects of very high oil prices on the wider economy. Premium fares, including the burgeoning fuel surcharges were also hitting levels which the passage of time may prove to have been the highest ever. This may also have been illustrating a ceiling level for the previously “price-insensitive” sector, but we may never know. Other events soon took over.

Next, reporting on the Aug-2008 figures last year, we noted that “The economic blowtorch is well and truly on. The number of passengers travelling on premium tickets worldwide shrank at an accelerating rate for the third month in a row in Aug-08…as the deterioration in economic conditions caused a slump in business travel. In August, for the first time since SARS in 2003, there was a decline in the number of passengers travelling on both premium and economy tickets. The post Summer pick-up in premium traffic has also failed to materialise and the unprecedented financial market turbulence is expected to show up in even more depressed figures in the remainder of 2008.”

By this time, “Premium passenger numbers were down -1.5% in Aug-08, while economy travel fell -0.1%. Outside the Middle East and the north Atlantic, premium traffic is in sharp decline.” The US market was still holding up.

(3) September - and the world changed

But then September 2008 marked the beginning of the comprehensively steep worldwide downturn, following the collapse of Lehman Brothers and the meltdown of the US financial system. So, as the base comparison months show greater declines, we should therefore be expecting a substantial improvement this year (that is, a greatly lesser fall than in preceding months).

However, not everyone was facing the same picture just yet. In early Oct-08, as the UK felt the brunt of the downturn first, we reported, “On Monday, British Airways reported an 8.6% fall in premium sales for the month of September – and its share price slumped 12%. Yesterday the share price fell a further 11.6%, as the combination of a sagging premium market and a weak outlook, as Britain’s economy turns to mud, conspired to spook the market….however, British Airways' near neighbour, Virgin Atlantic CEO Steve Ridgway asserted that, while yields were under some pressure, traffic was holding up well against last year. Air France and Lufthansa have been equivocal too about how front-end traffic is performing, as the days progress.

“But”, we continued, “no-one can be relaxed about where we go from here. The trauma that is afflicting the financial markets is quickly moving to general business offices and into Main Street. So, while the premium market trends illustrated in IATA's regular analyses showed premium holding up well through the summer period, the reality is that the market is now changing from day to day.

Only a sighting of forward bookings would disclose what is actually happening this week, as panic has set in across Europe and in the US. Indeed, a Lufthansa spokesperson did yesterday talk of "declining forward bookings from business travellers."

Yet there was still no general comprehension of the remarkable story about to unfold. The decline set in, well beyond even the most pessimistic predictions – as illustrated in the following graph. The still-strong and very large north Atlantic market was by this stage still propping up worldwide numbers. 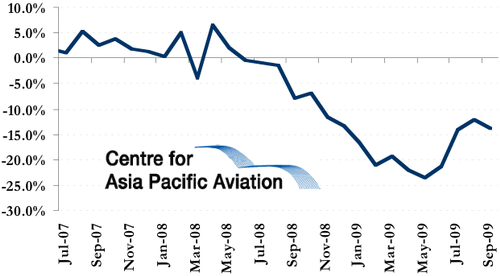 With that perspective, looking at each base month makes it apparent why the percentage decline figures are starting to look a lot better from Jul-2009 onwards, especially for the Pacific markets, which were the first to suffer.

Consequently, it is hard to get excited about recent improvements when they are measured against this base.

A lagging indicator – so watch the economy and the premium will follow?

Passenger travel, including business travel, tends to follow the market rather than lead as indictors. So signs of economic recovery should in principle be followed by improvements in traffic (and in yields). As IATA notes, “the differences in the geographical spread of economic recovery are reflected in travel markets. Economies have been improving most rapidly in emerging Asian countries.  The same was true with both premium and economy travel; within Far East passenger numbers were up 6.7% in September and there were significant improvements in Pacific and Europe-Far East markets.  Markets in the Americas and in the Middle East also improved.  By contrast there were deteriorations in the large within-Europe and North Atlantic markets, where economies are still relatively weak, which dominated the overall results.”

There can be little doubt there are signs of improvement in Asia. But just how sustainable they are, especially if the signals from the rest of the world are becoming more sombre, we will have to wait to find out.