The panini has become the modern day ‘chicken or fish’ dilemma, but technology now offers a solution

Airline catering is much more complex than it looks and can be a logistical nightmare for airlines. Even making sure passengers have their preferred choice of food or beverage can be a tricky conundrum. In the past loading an aircraft with the right proportion of chicken or fish meals had been more luck than judgement although a lot of manual calculations behind-the-scenes established an average formula.

However, average is no longer enough with the LCCs and changing practices bringing a much wider variety of products now available onboard to purchase. Fortunately, technology is working to ensure the right inventory of products are loaded on aircraft to meet passenger wishes.

Irish budget carrier Ryanair is currently the world’s largest international airline, operates one of the world’s most-visited travel websites, and – as reported by The Economist – its finance director reckons it is the “largest seller of ham and cheese panini in Europe”.

The airline is an Amazon Web Services (AWS) customer, using the cloud across its operations to lower costs, reduce food waste, cut carbon emissions, and ultimately, deliver the best possible experience for its passengers.

“Your holiday starts on the aircraft,” said Aoife Greene, Ryanair’s deputy director ancillary and head of retail, who decides exactly what food, beverages, and other items, and in what quantities, each jet should load every morning. “People want their gin and tonic. They want their ham and cheese panini. They want to sit back and relax. They don't want to hear, ‘no, that’s not available.’ It’s our job to make sure no one is disappointed.”

What few Ryanair passengers realise as they bite into their sandwiches is that the trollies rolling down the aisle are serving more than snacks. The trollies are a vital source of information about what’s being requested and sold, which is fed into a machine learning tool (nicknamed the “panini predictor”) built using AWS that’s helping the airline forecast precisely which products to put on which plane. But why? 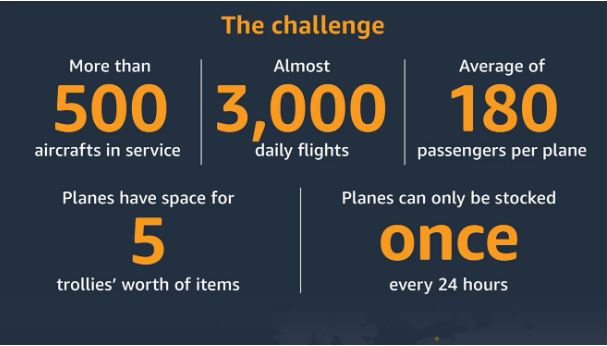 As much-loved as Ryanair’s ham and cheese paninis are, calculating just how many people will opt for one on any given flight is a mightier challenge than first appears. The company has more than 500 aircraft and runs 2,900 flights a day, with a single plane traversing multiple routes across multiple countries. Each aircraft has limited space – exactly five trollies’ worth – and can only be stocked once every 24 hours.

A manual task based on observations and guesswork

Unsurprisingly, this was an enormous manual task that encompassed 80 loading bases across the Ryanair network and required employees to review records of what had (and hadn’t) been consumed on previous flights to determine what to load the following week.

“I often joke that my colleagues who manage fuel consumption have an easy life,” said Ms Greene. “They know where a particular plane is going, and they know how long it will take to get there. I have no way of knowing whether we’re going to have 100 ballerinas or 100 rugby players on board.”

While the panini predictor isn’t yet at a stage where it can tell Ms Greene if she’ll be dealing with a Swan Lake troupe or rugby scrum, the tool with its custom-designed algorithm does analyse data such as demand, consumption, flight duration, time of day, season, departure location, destination, passenger nationalities, and number of children on board. This data helps Ryanair be far more accurate about what’s likely to be popular on a flight. 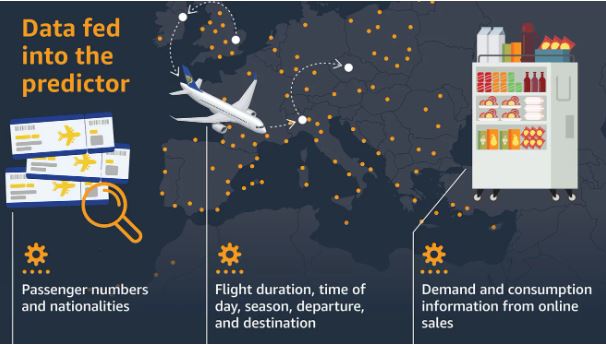 Ryanair’s chief technology officer John Hurley said the tool is proving particularly useful when deciding on product lines for a new route or adding a new loading base. He added, “Importantly, it has improved customer satisfaction, cut our waste in half, and boosted our sales.”

According to Mr Hurley, ideas like the panini predictor have “been in the background” for a long time. In the last year or so, the technology and the company’s ability to employ it have come together in a way that Ryanair is now exploring other ways to use the cloud to innovate across its business. There are already many other initiatives the company is working on with AWS.

One is a new tool being designed to forecast when different parts of a plane might be due for maintenance. This is a machine learning model, built using AWS and trained to recognise patterns in existing information that are precursors of an issue. This will generate reports for engineers, recommending areas for them to investigate.

Thousands of sensors across the entire Ryanair fleet are gathering information on variables in the system, with each flight generating from 5 million to 60 million data points per hour. Fleetwide, that’s a whopping 3 billion data points every hour.

So far, it’s been able to demonstrate potential to foresee problems up to four days in advance. The long-term goal is to develop the solution so it can predict issues across a number of the aircraft’s essential systems, preventing as many disruptions to the flight schedule as possible.

Technology that allocates the most fuel-efficient aircraft for each route

Ryanair’s fleet are all Boeing 737s, sharing the same style of fuselage but with different engine configurations. When a pilot takes off in the morning, they must have enough fuel to fly the route, an amount that’s calculated based on factors such as distance, altitude, and headwinds.

Feed those same calculations into a programme that can crunch the data, and AWS says it’s possible to make recommendations on which of the company’s aircraft would be the most fuel efficient for a particular journey – optimising fuel consumption, cutting C02 emissions, and saving millions of euros in the process.

The new chat bot built by Cation Consulting, an AWS Partner, that can converse in seven languages –English, French, German, Italian, Polish, Portuguese, and Spanish – is another innovation and is handling more than half a million conversations in any given month.

This initiative removes paper from several systems that traditionally used printed documents in the airline industry. For example, the development of Ryanair’s electronic flight plan has saved 20 million sheets, or 90 tons, of paper a year, according to AWS. A “paperless cockpit” plan that replaces hardcopy manuals with digital versions has reduced paper by 15 kg (33lbs) per cockpit, a total of 16 tonnes per year, which results in a fuel burn savings of more than 600 tonnes annually.

Meanwhile, the COVID-19 wallet helps customers upload necessary documents required for travel. At the height of the pandemic, Ryanair developed the solution using AWS and rolled it out in less than three days as part of its existing app.

For a home-grown Irish airline that developed into one of Europe’s busiest, Ryanair has always had big ambitions. Today is no different. Working to a 25-minute turnaround time – getting everybody off the aircraft to refuel and then reload in under half an hour – speed, flexibility, and passenger satisfaction are as crucial to its success today as they were when the airline relaunched as a low-cost carrier in 1990.

The only difference now is in the possibilities that technologies such as cloud computing offer to help Ryanair (and all other airlines) improve its customers’ experience while lowering costs and reducing waste and carbon emissions.

“When AWS came on board, it sort of lit the torch paper to get us going,” said Mr Hurley. “We’re testing these projects, analysing all this data, getting the results back, and, for the most part, just saying, ‘Wow.’ It’s a major opportunity to be even more future-focused and efficient.”

About AWS Travel and Hospitality…

AWS Travel and Hospitality is the global industry practice for Amazon Web Services (AWS), with a charter to support customers as they accelerate cloud adoption. Companies around the world, across every segment of the travel and hospitality industry – and of every size – run on AWS. This includes industry leaders like Airbnb, Avis Budget Group, Best Western, Booking.com, Choice Hotels, DoorDash, Dunkin’ Brands, Expedia Group, Korean Air, McDonald’s, Ryanair, SiteMinder, Sysco, Toast, United Airlines and Wyndham Hotels. These companies and many others are transforming their business by leveraging technology to enhance customer experiences and increase operational efficiency.