The Great Debate: aviation unions could be a force for good

The CAPA World Aviation Summit in Berlin on 27-28 November 2018 will bring together representatives of airline management and pilot unions to debate the question: can aviation unions be a force for good?

A CAPA analysis published in Sep-2018 examined the growing imbalance between demand and the supply of new airline pilots. Global aviation has enjoyed strong traffic growth in recent years, implying that supply has been sufficient. However, this growth is tightening the supply of labour and the airline industry faces challenges in recruiting qualified pilots in the numbers needed to cope with future expansion.

Pilots are not the only labour group in the industry, but they are by far the most expensive and highly skilled. The looming shortage of pilots is strengthening their negotiating position. The discussion in Berlin will consider the challenge of servicing aviation's growth with an adequate supply of human resources.

It will also discuss whether unions have the industry's interests at heart, whether airlines are too focused on a wage race to the bottom, and whether unions can adapt to rapid change. Cost reduction remains a key priority for management, but this may be more difficult when skilled labour is in short supply.

Pilot supply is not keeping up with demand for new pilots

In Jun-2017 the flight training provider CAE published a 10 year forecast of pilot demand. This implied a requirement for an average of 25,000 new airline pilots pa over the next decade. Forecasts over 20 years by Airbus and Boeing imply even higher numbers: 27,000 pa under the Airbus forecast and almost 32,000 pa under the Boeing forecast.

CAE's forecast implies an average annual growth rate in the world population of active commercial airline pilots of more than 4% pa to 2027.

Data on historical numbers are hard to establish on a global basis, but CAPA analysis of data in both the US (from the FAA) and the UK (from the CAA) shows average annual growth in pilot licence numbers of only 1% pa over the past decade.

The CAPA World Aviation Summit in Berlin on 27-28 November 2018 will bring together representatives of airline management and pilot unions to debate the question: can aviation unions be a force for good? For more details please check here.

In the faster growing aviation regions of Asia Pacific and the Middle East, the supply of local experienced pilots is constrained. As a result (according to CAE) nearly 10% of pilots in these regions come from other parts of the world. For some Middle East airlines, more than half of their pilots are from other regions.

This local supply/demand imbalance has been solved by the bidding up of pilot pay in the Middle East and Asia Pacific. CAE estimates that pilot salaries in these two regions are 10% to 15% higher than in the western hemisphere and that some airlines in China offer premiums of more than 70%.

Experienced pilots from Europe, in particular, have made the move to better-paid positions in the Middle East and Asia Pacific. This in turn may also be having a knock-on effect on pilot pay in Europe.

Against this backdrop of a tightening supply of pilots and seemingly relentless growth in demand, labour's negotiating position is strengthening.

CAPA has tracked the number of aviation news articles on its website that mention the word 'strike'. This metric has broadly followed the global airline profit cycle in the past – not surprising, since labour is typically more demanding when the profit cycle is at its peak.

However, there was a surge in the number of strike-related articles in 1H2018, running ahead of the profit cycle. Airline margins peaked in 2016, although they have remained at historically high levels. 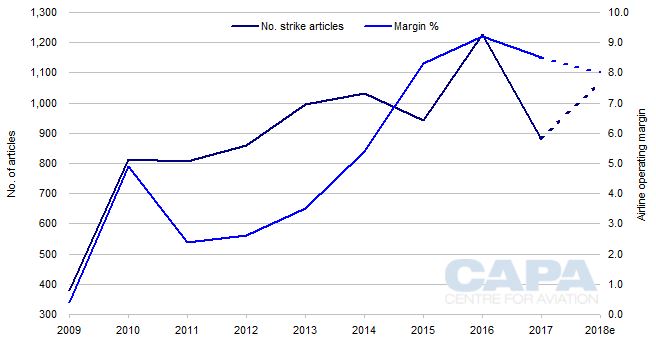 *Margin figures for 2017 and 2018e are estimates from CAPA world airline profit margin model; number of articles for 2018e is projection based on the year-on-year growth rate for 1H2018.
Source: CAPA - Centre for Aviation, ICAO.

The increase in strike mentions in 1H2018 may be an indication of unions' growing confidence, emboldened by the supply-demand balance tipping in their favour.

Even Ryanair was forced to drop its long-held opposition to union recognition and to negotiations with pilot unions in late 2017.

Almost immediately this led to a series of unprecedented strikes at Europe's leading airline by passenger numbers. In turn, the strikes have prompted a profit warning from Ryanair, one of the world's highest margin airline companies.

This example of union intransigence, at the least profitable of the two airlines that form Europe's least profitable legacy airline group, probably has less to do with the airline profit cycle or even the looming pilot shortage. In the case of Air France, it seems to be a deeply ingrained instinct for pilot unions to resist changes to working practices in support of what labour representatives see as the best interests of their members.

Do unions have the interests of the industry at heart?

The Ryanair and Air France examples, and also the apparent broader trend illustrated by CAPA's tracking of strike-related articles, raise the question of whether or not unions have the interests of the industry at heart.

The first answer to this question must be a resounding 'no'.

Some would even argue that unions' interests are even further distant from those of the industry; that the unions' main objective is to preserve themselves and the jobs of the officials running the unions.

Of course, in the long run the interests of unions and the industry must be at least partially aligned.

The industry needs labour in order to serve its customers, and labour needs the industry to provide employment. Enlightened unions will work with aviation management to evolve working conditions and achieve greater efficiency for the sake of the industry's financial health and the consequent preservation and growth of employment.

Similarly, enlightened management will work with labour representatives to ensure that the workforce is a partner in implementing change.

The increasingly global nature of the market for airline pilots in an environment of tightening labour supply may currently be giving unions more of an upper hand. However, it is also presenting unions with challenges as a number of airlines seek a more globalised business model.

The arcane web of regulations that constrain ownership and control, market access, safety and employment regulations in the aviation industry typically meant that an airline's operations and workforce were primarily based in its home country.

Now, however, a number of factors have blurred the picture.

The liberalised EU market, the use of cross-border affiliates and joint venture structures in South East Asia and elsewhere, the growth of 'open skies' style agreements – particularly that between the US and the EU (with Norway and Iceland) – and the flexibility often associated with the concept of an airline's principal place of business have led to many situations where airlines employ staff in jurisdictions other than those in which the staff principally operate, or employ them in multiple jurisdictions.

Those airlines that have adopted this approach do so in order to minimise labour costs, either because of lower wage rates, or because of more favourable employment law, or both.

Examples include Ryanair's use of Irish employment law for employees across Europe (although this has been challenged) and Norwegian's establishment of subsidiaries and employee bases outside the high labour cost environment of Norway.

Even SAS, a legacy airline not often associated with radical thinking in this area (it opposed NAI's application for a US permit), has established an Irish-registered subsidiary with bases in London and Spain to access lower cost labour than in Scandinavia.

These kinds of moves have been vocally opposed by unions, who object to the use of what they call 'flags of convenience' to engage in a 'race to the bottom' on labour costs by exporting jobs to cheaper labour markets.

Such objections often miss the point that airlines that use this approach successfully tend to be net creators of jobs in numbers that simply would not be sustainable in locations with high labour costs.

Ultimate responsibility lies with management to manage conflicts with unions

Often described as essentially inertia-seeking, unions sometimes struggle to adapt to the rapid process of change that airline managements increasingly need to direct.

IAG CEO Willie Walsh has long years of experience dealing with unions at a number of airlines. He was also once a union negotiator himself when he was a pilot at Aer Lingus.

Mr Walsh spoke at CAPA's Airlines in Transition conference in 2014 about what he saw as an obvious labour-management conflict, namely that labour protects employment while airlines create employment. “Through growth you create employment”, Mr Walsh argued, adding that the job of labour groups was to protect terms and conditions for existing employees “not to create employment”.

It is easy to blame unions for digging in their heels and opposing changes that bring about greater efficiency in the airline industry. However, ultimate responsibility always lies with management.

Again, the words of Mr Walsh make this point well. At CAPA's 2013 Airlines in Transition conference, he said: "it is not about unions, but management. Management needs determination and can do it if it wants to…Cost creep is requested by unions, but made by management”.