Emirates has declared a USD964 million profit (AED3,565 million) for the 12 months to 31-Mar-2010, an impressive performance against a backdrop of the worst global recession in generations. Chairman and CEO of the carrier, Sheikh Ahmed bin Saeed Al Maktoum, described the period as the airline’s “toughest year”. But a profit approaching USD1 billion is a tough year most of its competitors would be happy to endure. Whatever anyone says about Emirates being government owned, it is unavoidably an increasingly powerful model and extremely cost effective, while being able to drive better than average yields. 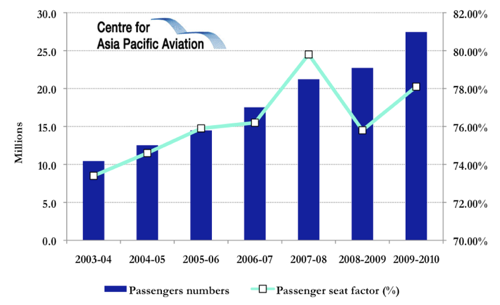 But revenue growth was minimal, up just 0.4%, to USD11.8 billion, after transport revenue (passengers, cargo and mail) dipped 15.3% in the first half of the year as yields were dragged lower by the global economic crisis. Passenger revenue was up 0.9 % for the year, but was held back by lower revenue from cargo and excess baggage and other categories, resulting in an overall drop in transport revenue by 0.6%.

Ancillary revenues were slightly stronger over the year, although Emirates is determined to keep its service focus intact. It has not taken the approach of many North American or European competitors, which have moved to introduce new ancillary charges such as baggage fees or charging for onboard meals. Emirates actually increased its free baggage allowance by 10kg.

The steep decline in business travel put the carrier’s yields under “severe pressure” during the year. However, Emirates' responded when conditions allowed by increasing prices, while maintaining load factors. It credits its ability to do this to a combination of a sustained investment in its product and brand and resultant strong passenger loyalty. 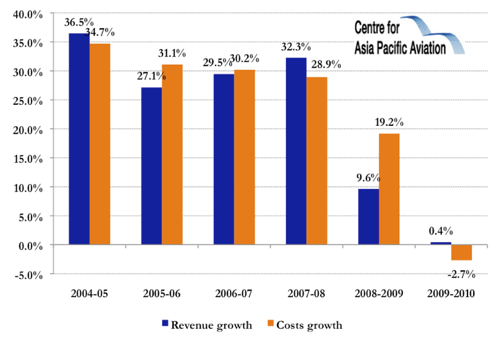 As a result of the poor revenue performance (by its standards), Emirates significantly underperformed its average margins in the past year.

Emirates’ operating margin for the full year was 8.2%, while net profit margin was 8.1%. While these are improvements over the results posted during the very difficult FY2008/09, they are still well below the performance Emirates have achieved over the past decade. Since 2003/2004, operating and net profit margins have averaged just under 10%, even including the impact of the difficult FY2008/2009. 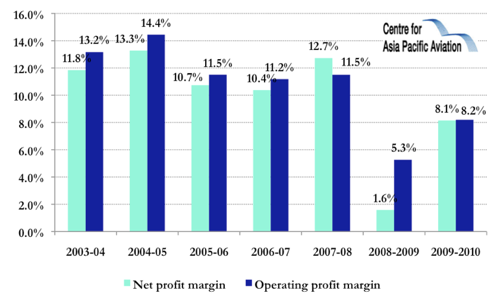 The positive margins this year are testament to the carrier’s ability to drive down costs and keep them as low as possible. Even while expanding its fleet and growing capacity at better than 20% over the year, Emirates managed to reduce total operating costs by 2.4%.

Much of this is due to the lower cost of jet fuel. Emirates managed to slice its fuel costs by 17.6%, thanks to a 30% lower price of crude oil compared to 2008/09. Fuel costs dipped to just under 30% of total operating costs, mostly thanks to a 29.5% reduction in per unit fuel costs.

During the year the carrier launched a new fuel-saving initiative designed to cut approximately USD10 million p/a out of its fuel costs. It has also adopted techniques such as single engine taxiing and more direct flight routings to cut its fuel burn over the previous year. 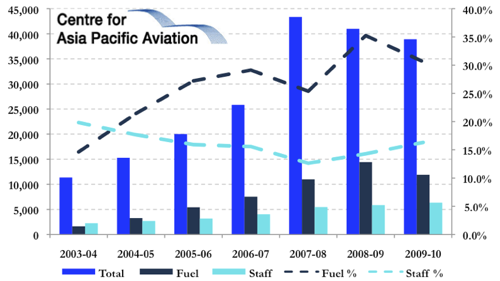 Employee costs rose 8.3% over the financial year, a minimal rise compared to the 20.1% increase in capacity (ASKs) and passengers handled (+20.8%). The carrier froze recruitment temporarily and redeployed staff, squeezing more productivity from its workforce. It also introduced a policy of voluntary unpaid leave, as part of its cost containment efforts.

However, Emirates also significantly reduced sales and marketing costs (down 9.1%) and the catchall ‘corporate overheads’, which were down 24.4%. The carrier also did not have the derivative losses that it reported in 2008/09.

Emirates will continue its relentless growth, emboldened by its outstanding performance throughout the global economic crisis. The carrier took delivery of four A380s last year, and has another 50 on order. It also took delivery of another 11 B777s. ASK growth surged back above 20% last year, after a brief dip below 15% in 2008/09. 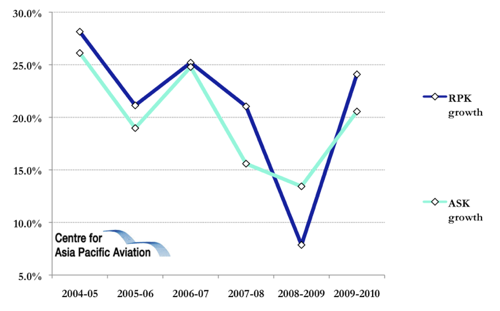 Emirates has 142 aircraft on firm order and is in negotiations with manufacturers for additional aircraft. Its fleet commitments have been estimated at close to USD40 billion, and the carrier has borrowed heavily to fund its fleet purchases, with total debt increasing to USD7.5 billion. Emirates sees no difficulties in meeting these obligations and future funding requirements, with traditional lenders returning and the carrier having success in developing new sources of finance.

At the same time, it managed to improve its cash assets, to USD2.9 billion, which will galvanise it in the pursuit of its growth strategy.

While there has been talk of significant structural change in the industry and the passenger mix, Emirates is confident that the global growth in passenger traffic will return to the long-term trend of 5% p/a. But with its strong geographic advantages and aggressive capacity expansion, the Middle East is expected to significantly outperform the world average. Passenger traffic in the region rose 8.5% in 2009 and is forecast to top 15% this year.

Emirates will continue to push its fleet, network and brand. If it is able to generate a USD1 billion profit in its toughest of years, Emirates should convert the improving global economic environment into something very special in 2010/11.