The bulls are running, but US airline yields and revenues are lame

The US aviation industry's woes continue, but irrational exuberance appears to have overtaken Wall Street. Despite double digit reductions in fares, which has resulted in significant yield deterioration, demand for air travel continues to remain weak, as the US and global aviation industry suffers at the hands of the global recession and volatile fuel prices.

According to the Air Transport Association (ATA), 4% fewer passenger travelled on US airlines in Jul-2009, while the average price to fly one mile fell 18%, a "modest" improvement from the 21% decline and 6.5% passenger reduction in Jun-2009. But given the peak Summer travel period is here, the figures are clearly disappointing.

ATA President and CEO, James C May, stated, “while the modest improvement in demand from June to July would normally be cause for cautious optimism, the fact is that the number of air travelers continues to fall despite double-digit declines in fares. Clearly, with the difficult economic environment, demand for air travel remains weak”.

See separate report: ATA reveals early signs of traffic improvements, but US airlines not out of the woods yet

Yields continue to deteriorate at alarming and unprecedented levels

During Jul-2009, US carrier passenger revenues continued the decline sharply, falling 21% year-on-year in Jul-2009, following a 26% reduction in Jun-2009, for nine consecutive months of contractions. 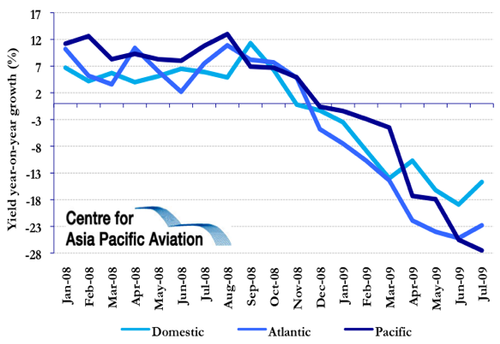 However, it must be noted that last month's reductions were off growth in the corresponding period in 2008, with domestic Jul-2008 yields up 5.9% and Atlantic, Latin and Pacific yields gaining 7.5%, 12.9% and 10.8%, respectively. Yields were higher in 2008, partially due to fuel price related increases, which have reduced as fuel prices have decreased. 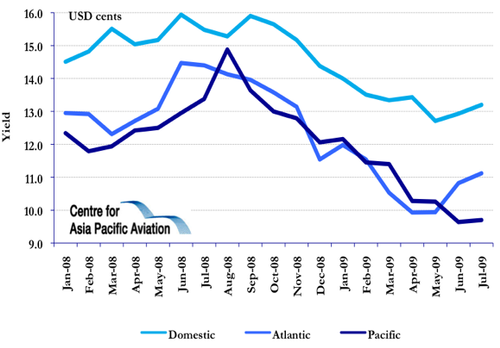 But looking forward, ATA carriers are likely headed for another month of deep year-on-year yield reductions in Aug-2009, following double digit yield growth last August for Atlantic, Latin and Pacific services (of 10.9%, 16.2% and 13.0%, respectively). Domestic yield in Aug-2008 was also quite strong rising 4.9%.

Despite this toxic environment of reduced demand and woeful yield figures, the Amex Airline Index has soared almost 90% from the early Mar-2009 lows. Investors appear to be focusing on hopes the worst of the industry's steep revenue losses may have passed, and that the US airlines have better scope for raising more debt to keep them alive in the lean months ahead. 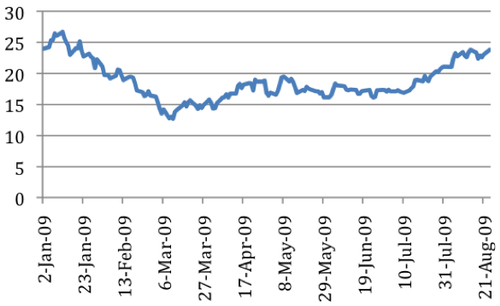 But it could be a case of irrational exuberance. Any recovery will be slow and these yield falls, particularly on international markets, will take a very long time recover.