The airline profit cycle: what goes up must come down. Possible warning signs as Farnborough nears

After another year of record high aircraft orders in 2013, both in absolute numbers and as a percentage of the fleet at the end of the previous year, there is naturally some concern in the industry about the impact this might have on capacity discipline.

CAPA has looked at this and related concerns a number of times before, but they continue to occupy attention. IATA published its updated airline industry financial forecast in early Jun-2014 and we have now passed the half-way point of 2014. Just ahead of the Farnborough Air Show, we recap and update our analysis of the global airline profit cycle and its relationship with the capacity cycle in this report.

The airline industry is well above historical mid cycle margins and still in the upswing phase. Moreover, there are signs that the current rising trend of sector profitability is not purely cyclical, but that it may also have a structural dimension. However, what goes up must come down. Are there very early warning signs of an approaching downswing?

High numbers of annual aircraft orders are now commonplace, but deliveries have not followed them

Over the past 10 years, annual orders have averaged 9.9% of the previous year end fleet number - versus a 40 year average rate of 7.7%. What impact has this succession of high orders had on deliveries?

The historical pattern was that a delivery peak would follow two years after an order peak, but this has not happened in the past 10 years. From 2004 to 2013, orders averaged 5.3% of the fleet, below the 40 year average of 5.9%.

Furthermore, during this past 10 year period, deliveries only rose as high as this long term average in 2013, after remaining below the average since 2003. The pattern of deliveries as a percentage of the world fleet has been flatter and lower than at any time before.

World airline industry aircraft orders and deliveries as a percentage of total fleet: 1972-2013 and forecast for 2014 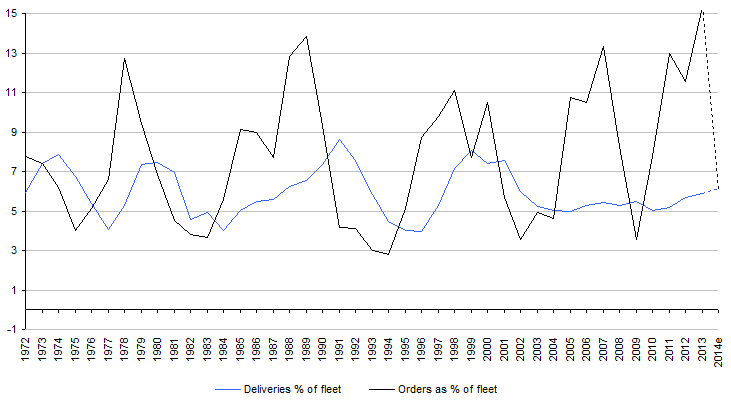 Record order backlog helps to smooth out the delivery pattern

A contributory factor to this smoother pattern of deliveries is the record high order backlog (nine years at the end of 2013), which ensures that the manufacturers' production capacity is more or less full. Yes, the airframers can flex their production upwards and, indeed are doing so. However, it seems very unlikely that they could ramp deliveries up enough to approach anywhere near historical peak rates of around 8% of the world fleet from their 2013 rate of 5.9%.

This would require 2014 production to be 40% higher than in 2013, rather than the 13% increase currently forecast by the Airline Monitor, for example. The Airline Monitor's forecast is equivalent to 6.4% of the 2013 year end fleet, the highest since 2001, but still well below historical peaks.

Furthermore, the manufacturers themselves are pointing to slightly lower numbers than forecast by the Airline Monitor. Boeing's current guidance is for 2014 deliveries to be around 715 to 725 aircraft, which is 10% to 12% higher than in 2013, while Airbus expects to deliver a similar number to the 626 delivered in 2013.

Embraer's 2014 guidance for 92 to 97 deliveries of commercial jets is equivalent to growth of 2% to 8%. Bombardier expects to deliver 80 commercial aircraft, which is significantly higher than 2013, but this includes turboprops, which do not form part of our analysis.

Adding these individual elements of manufacturer guidance suggests a production increase of around 8% year on year and deliveries to reach 6.2% of the fleet in 2014.

For the years beyond 2014, manufacturer guidance is practically non-existent, but it continues to be nearly impossible for deliveries to reach previous peaks as a percentage of the fleet in the near to medium term. The Airline Monitor forecasts a steady increase in deliveries to 7.3% of the fleet in 2018, before it starts to fall again. This is still below previous peaks, although a rising trend in deliveries gives some cause for concern after a number of years of their remaining below 6% of the fleet.

See related report: Record airline fleet order backlog has winners & losers - and questions about how it will be funded

A mitigating point, helping to ease the concerns over these modestly rising delivery trends, is that aircraft retirement rates are also above historical levels. In 2013, the number of aircraft retired was equivalent to 2.9% of the fleet, a record high. The 40 year average for retirements as a percentage of the fleet is 1.5%, but this has risen to an average of 2.1% over the past 10 years (a rate that used to represent peak retirements).

The combination of historically low delivery rates and high retirement rates has also kept fleet growth low by comparison with its long term trend. In 2013, the world jet fleet grew by just 3.0%, compared with a 40 year average of 4.4%, and it has averaged only 3.2% over the past 10 years, according to data from the Airline Monitor.

Again, the rising growth trend gives some cause for concern, although these rates are still below the long term average and are also less than the long term 6% pa growth in passenger traffic.

World airline industry aircraft deliveries and retirements as a percentage of total fleet and fleet growth: 1972-2013 and forecast for 2014 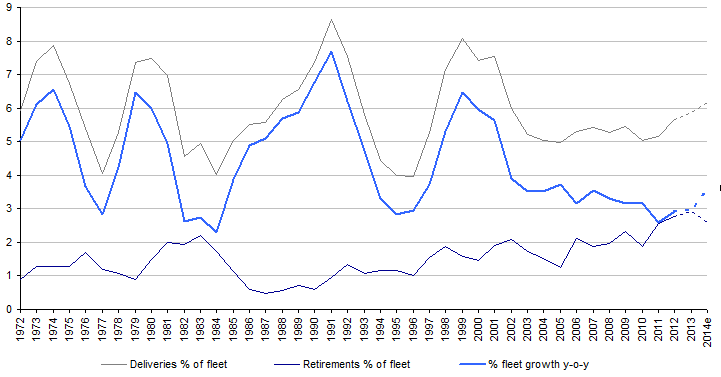 Aircraft retirements are being driven by high fuel prices

One of the main motivating factors behind the historically high rates of aircraft retirements has been the rise in fuel prices since the late 1990s. As a percentage of revenues, fuel costs increased from 9% in 1998 to 30% in 2013, having touched 33% in 2008.

It is to the airline industry's credit, and its instinct for survival, that non-fuel costs fell from almost 86% of revenues to 67% over the same period. 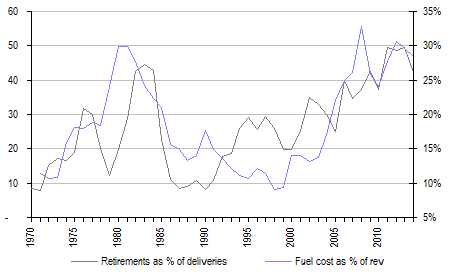 Capacity utilisation drives profitability - but it's not just load factor 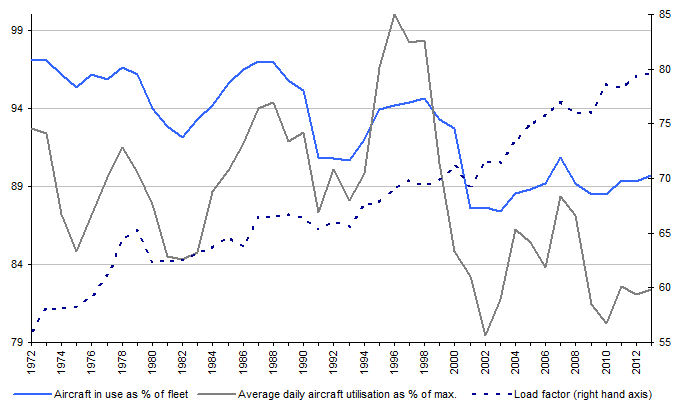 A fuller understanding of airline capacity utilisation must also include daily utilisation hours and the percentage of the fleet that is in use (ie not in storage).

In spite of the long term upward trend in load factor over a number of decades, the industry's margins have not followed an upward trend over this period, but have followed a cyclical pattern. 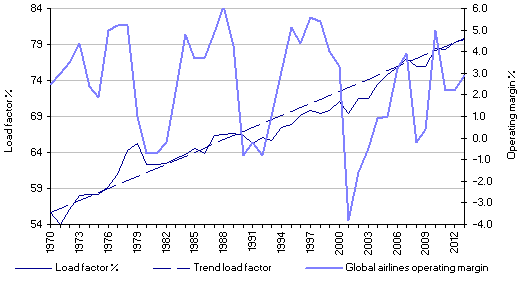 This cyclicality in airline margins has been more closely defined by the pattern of the other two measures of capacity utilisation, namely daily utilisation hours and the percentage of the fleet not in storage. 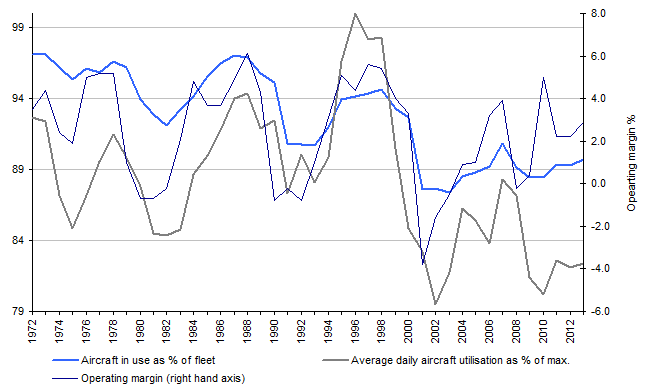 Although daily utilisation and aircraft in use as a percentage of the fleet still seem to drive the cyclicality of airline profits, neither has followed a rising underlying trend since the 2001 margin trough and so they do not fully explain the recovery in margins.

The strong underlying upward trend in margins since 2001 (albeit with significant cyclical variations) appears to have been more closely related to load factor gains in this period (unlike in previous periods).

A plot showing the difference between load factor and its straight line trend against airline operating margins illustrates the apparently increased importance of load factor gains in driving the margin recovery since 2001 (see chart below). This also gives some weight to the suggestion that this is not merely a cyclical recovery, but is also to some extent a structural improvement. 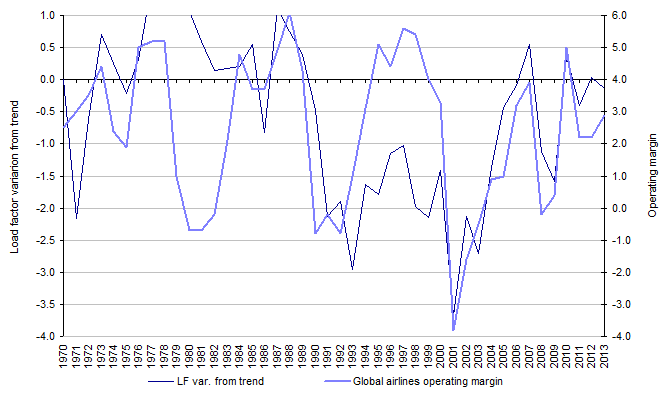 *The difference between actual load factor each year and the load factor described by a straight line drawn from the load factor recorded in 1970 to that forecast by IATA in 2014
Source: CAPA – Centre for Aviation, Airline Monitor, ICAO, IATA

CAPA Capacity Index is pointing up

The methodology for devising our CAPA Capacity Index, which relates overall capacity utilisation has been introduced and explained in previous reports. In essence, it combines three measures of capacity utilisation: load factor, daily hours utilisation and the proportion of the world fleet that is in operational service rather than storage.

Bringing together the three measures of capacity utilisation and adjusting for the upward trend in load factor, we derive our Capacity Index. This shows a close relationship with world airline operating margins (see chart below). Differences between these two lines are mainly explained by changes in fuel costs as a percentage of revenues.

As in our previous analysis, our Capacity Index is ticking upwards for 2014 and is comfortably above its historical midpoint. This chimes with IATA's forecast that world airline operating margins will increase from 2.9% in 2013 to 4.2% in 2014. This margin forecast is well above the historical mid cycle level of around 2% and is in a similar range as the past two mini-cycle peaks. 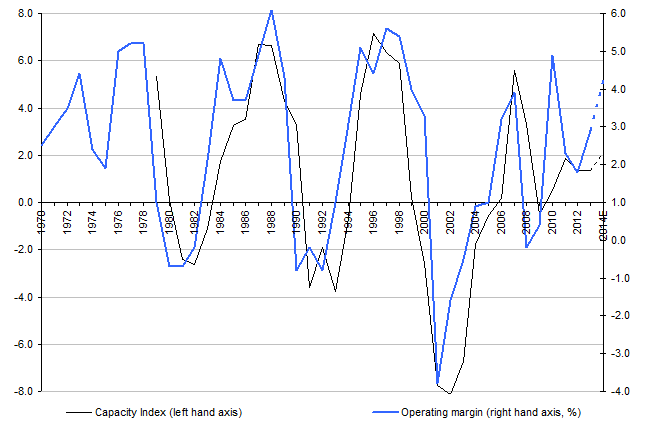 To keep things in perspective, however, it is important to remember that this level of profitability is insufficient for the industry to generate a return on capital that covers its cost of capital.

Even at historical peaks of the profit cycle, the world's airlines have not collectively covered the weighted average cost of capital that would be sought by a purely commercial investor looking for a market rate of financial return.

Return on capital invested in airlines and their cost of capital: 2000 - 2014 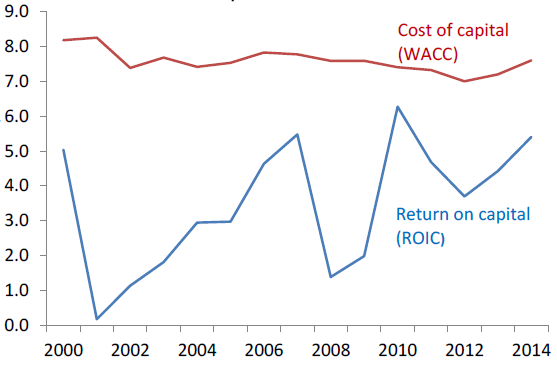 … and the next phase of the cycle will be the downswing. The critical part is - when?

To inject a further note of caution, and at the risk of stating the obvious, it is important to keep in mind that the next major change when the industry is in the upswing of the profit cycle is the start of the next downturn. Even if the airline sector is achieving a structural improvement in profitability, it remains a cyclical industry and a downturn follows an upturn as sure as night follows day.

According to our analysis, it is unlikely that a global downturn will be triggered by a significant ramp up in fleet growth.

Whenever it comes, it is more likely that the next downturn will be demand-related, whether due to a general weakening of the global economy, or some external demand shock caused by geopolitical events (which could also spark an increase in oil prices).

It is worth noting that IATA's forecasts for 2014 have been lowered twice since Dec-2013. In addition, the final figure for 2013 operating margin, published by IATA in Jun-2014, was 0.5 ppts lower than its forecast published in Jun-2013.

Forecasting airline profitability is notoriously difficult and we draw attention to this not to criticise IATA's forecasting abilities, but rather to highlight that a pattern of downward revisions to forecasts may be an early warning that the upswing could be losing its momentum. And so the cycle continues.

IATA's revisions to estimates for airline industry operating margins: 2013 and 2014 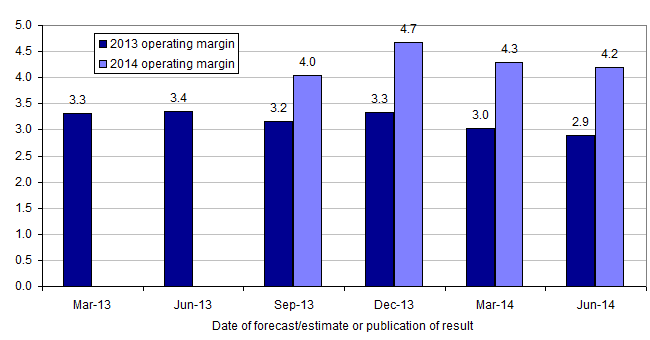