Thai Airways' shares surged 10.6% yesterday to its highest level in more than a year after Morgan Stanley upgraded the carrier’s stock from “equal weight” to “overweight”.

The upgrade was based on optimism of an economic revival, which will boost tourist arrivals and profitability levels. According to Morgan Stanley, “we think the worst is behind Thai. We expect operating profitability of airlines in Thailand to improve with the recovery in the global and Thai economies.” The broker added that Thai Airways' stock is “among the cheapest of the airline shares”, despite soaring 41% in the past five days.

Also gaining yesterday were the major Chinese carriers, with Hainan Airlines, China Southern, Shanghai Airlines, China Eastern and Air China all up, by 8.4%, 4.7%, 4.6%, 3.8% and 3.6%, respectively. 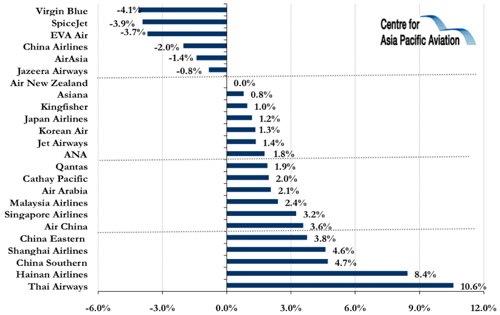 Air New Zealand remained stable yesterday, but has fallen 2.4% in early morning Wellington trading today, as the carrier reported a 90% slump in profitability (to USD14 million) in FY2008/09, the largest reduction in earnings since the company posted a loss in 2002, as the global recession curbed international travel.

According to Chairman, John Palmer, "this result positions Air New Zealand as one of the top airline performers globally but it falls short of delivering shareholders an appropriate commercial return". CEO, Rob Fyfe, added that “although there are some early indicators that the slump in travel demand may be showing signs of having bottomed out, it would be naive to think that there won’t be bumps on the road to economic recovery”.

Meanwhile, AirAsia's shares eased 1.4%, after announcing the launch of an offering of up to 90 million non-collateralised European-style cash settled call warrants.