Meanwhile, Air China rose 4.2%, China Southern rose 5.3% and China Eastern gained 1.4% on a broker upgrade for Air China, citing traffic rebound and the potential for increased fares. EVA Air was steady after its board approved a reduction of the company's capital by 42.6%. The company also plans to raise over USD200 million in fresh capital on the open market.

Virgin Blue’s shares slipped 5.1% as the carrier confirmed plans to defer the fifth and sixth B777 for V Australia, while Tiger Airways launched an aggressive discount promotion across its network, including the lucrative Sydney-Melbourne market that Tiger is entering in July. 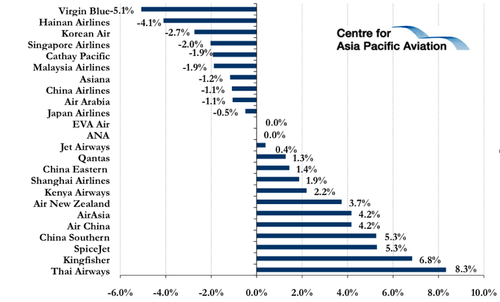