Thai Airways shares gained 1.4% on 02-Feb-09 after its three-year Business Improvement Plan (BIP) won in principle approval from the State Enterprise Policy Office (SEPO) and the Committee on Rehabilitation and Development of Air Transportation. As a result, Thai is a step closer to receiving a much-needed government injection of funds to help it through its liquidity crisis.

SEPO insists Thai's problems are short-term in nature and "will be solved". The airline has commenced rebuilding its network after the Bangkok Airport closures in late 2008 slashed demand by up to 40%.

Meanwhile, ABN-AMRO is also optimistic about Air New Zealand's outlook, despite significant short-term challenges. The broker issued a "buy" call on the stock, stating it expects Air NZ to "fly counter-cyclical to the rest of the economy in 2009, due to shrinking capacity, lower fuel prices and favourable currency hedging". According to AMN-AMRO, these factors leave the airline "well placed to deal with demand destruction".

ABN-AMRO's share price target for Air NZ is unchanged at NZD1.50 - a 60% premium to its current price. Given the continuing meltdown in global equities, that would be an outstanding performance. Air NZ closed up 1.1% yesterday. 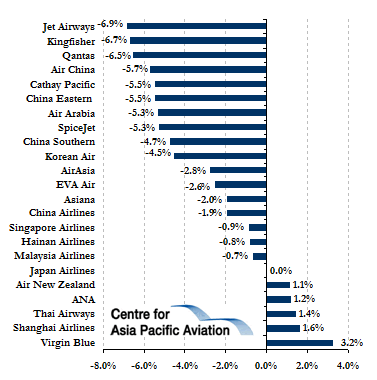