The Board has also approved the refurbishment of 12 B747 aircraft, utilised predominantly on high-revenue generating services to Europe.

Japan Airlines Corp’s long-term corporate credit rating was meanwhile cut from “CC” to “selective default” by Standard & Poor’s, which stated the carrier missed payments on some of its bank loans.

The ratings agency stated it saw the airline's agreement with creditors to suspend some repayments (reached on 20-Nov-2009), as part of its debt restructuring efforts as a default.

According to S&P, “based on agreement with these creditors, the company then ceases payments on certain obligations for a period of negotiation. We understand that this agreed suspension of debt payments may not legally constitute a default. Based on Standard & Poor’s criteria, however, we view it as a default”.

JAL shares have tumbled 57% this year in Tokyo trading, the worst performance in the Nikkei 225 Stock Average.

Also in North Asia, Hainan Airlines’ shares were 0.5% weaker yesterday, despite HNA Group Chairman, Chen Feng, stated he expects the group (including its aviation, logistics and finance companies) to increases total revenue by 54% in 2009. He added that Hainan Airlines handled 15.0 million passengers in the ten months to Oct-2009, a 20% year-on-year increase.

The fuel levy on short-haul routes will be raised from USD15 to USD17.50 per sector, while long-haul services will be increased from USD39 and to USD45.50.

Elsewhere, Jet Airways’ shares soared 8.7%, while on the other end of the spectrum, shares in China Eastern and Air New Zealand were down by 4.6% and 4.0%, respectively. 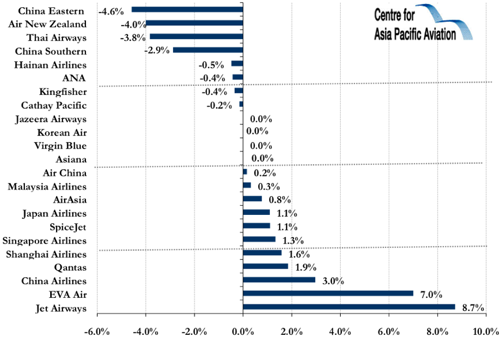 *It was a public holiday in UAE