Thai Airways’ shares were up 2.0% on Friday. Also on Friday, the carrier’s President, Piyasvasti Amranand, stated the carrier may not reach its revenue target of USD4.5 billion for 2009 and is unlikely to report a profit this year, due to fluctuating oil prices and low passenger yields, as a result of fare reduction campaigns.

Mr Amranand added that while the carrier’s results were “positive” in 3Q2009, with the carrier seeing a recovery in cargo and passenger traffic, it is “still facing a crisis”.

However, Thai Airways expects to report a net profit in 2010, due to economic recovery and its restructured management. The carrier also forecasts an improvement in yields in 2010.

In North Asia, Japan Airlines’ shares fell 1.8% in Tokyo trading on Friday. The stock has slumped 49% in 2009, the largest decliner in the Nikkei 225 Stock Average.

In most recent development, JAL reportedly plans hold back salary payments for all of its executives and is planning to forgo Winter bonus payments for its staff.  The Government, meanwhile, is seeking to develop a comprehensive rescue package for the carrier, which is reportedly facing the risk of a cash shortage as early as the end of this month.

As part of this, The Government reportedly plans to introduce legislation in early 2010 imposing mandatory pension benefit cuts at Japan Airlines, as a condition for a public bailout, according to reports by The Nikkei Business Daily.

Also in North Asia, Korean Air’s shares gained 5.8% yesterday, while on the other end of the spectrum, China Eastern’s shares slipped 2.7%. 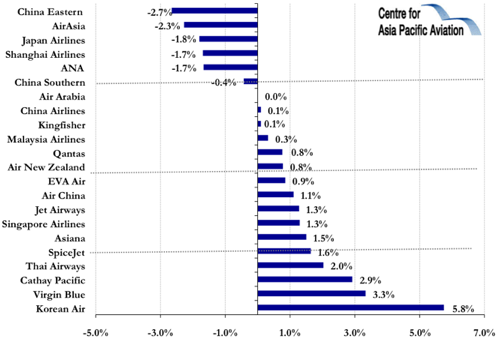