Thai Airways shares slumped yesterday to their lowest level since listing in 1992 on reports the carrier could seek up to USD544 million in emergency loans from state-owned banks as it grapples with cash flow problems. The airline is struggling amid a downturn in foreign visitor arrivals and its own failure to restructure during the good times.

Thai Airways will report its first loss in 45 years in 2008 and the red ink is expected to flow again in 2009.

At the other ends of the spectrum, Indian airline shares surged yesterday as investors bet on potential changes to foreign ownership laws which prevent foreign airlines from acquiring direct or indirect stakes in local airlines. The Civil Aviation Ministry's proposal to allow up to 26% foreign airline participation has reportedly been circulated among other Ministries. The government has until the end of March to make a decision before it enters election mode. Civil Aviation Minister, Praful Patel, stated last week, "there is a more reasonable case now [for foreign investment] than there was three to four years ago".

Jet Airways shares surged 19.6% (after rising as much as 30% in intra-day trade) after the airline forecast a possible return to profit next financial year. SpiceJet soared 13% and Kingfisher rose 7.7% 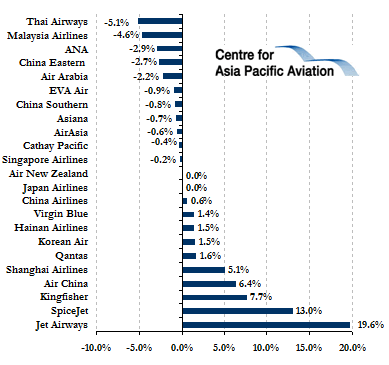