Thai Airways International’s shares were down 1.0% yesterday, as the carrier slipped to a net loss of USD121.5 million in 3Q2009, due predominantly to foreign exchange losses (due to the appreciation of Euro and Japanese yen) and falling passenger yields (-17% to USD 5.85 cents ex-fuel surcharge from 2Q2009 levels).

Shares in Singapore Airlines gained 0.9%, after the carrier, upon the release of the carrier’s Oct-2009 traffic results, stated there are “encouraging signs that the decline in demand may have bottomed out”, with the airline also seeing “increasing demand” in the premium classes.

Also in the month, the carrier reported a 9.6% reduction in passenger numbers to 1.4 million, while passenger load factor was up 3.6 ppts to 81.1%, for the second consecutive month of load factor improvements. 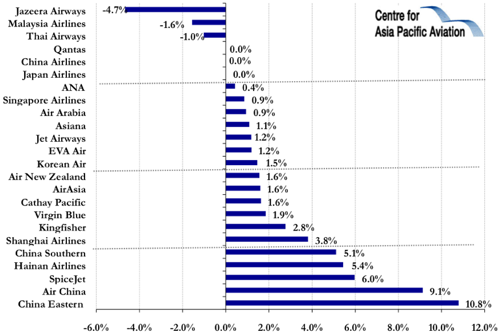 Qantas’ shares remained stable yesterday. Separately, the Australian Financial Review today reported that the carrier plans to reduce the number of first and business class seats on its long-haul fleet, as part of a review of seating following a slump in premium travel demand, amid the global economic downturn. An announcement from Qantas of the changes is expected to be made by the end of Dec-2009.