Thai Airways’ shares gained 6.1% on Friday, rising to the highest level in more than four months in Bangkok, after the airline reported a better-than-expected FY2009 net profit (of USD222.5 million, compared to a loss of USD647.7 million in the previous corresponding period) and a positive profit outlook for 2010. The carrier’s shares slumped 16.6% in the October-December quarter.

Thai Airways’ results were positivity impacted by a USD96 million gain on foreign currency exchange and a 31% reduction in total costs, which more than exceeded the 19% slump in revenues (to USD5.0 billion). However, yields remained weak in the 12-month period, down 9.6% (passenger yields were down 10.1% with cargo yields down 12.3%).

Thai Airways expects to increase profitability levels by 10-15% in 2010, with the carrier adding that it expects record load factors of approximately 80% in Jan-2010 and Feb-2010.

While the carrier did not provide an outlook, JAL's administrator from the Enterprise Turnaround Initiative Corp, Akitoshi Nakamura, stated the company's expected loss for the fiscal year through 31-Mar-2010 will likely be smaller than the previously projected operating loss of over USD2.9 billion. 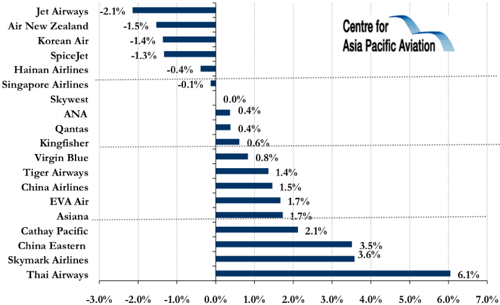