Shares in Thai Airways gained 3.6% yesterday, reaching its highest level since 24-Mar-2010 during the day, as Thai Finance Minister, Korn Chatikavanij, stated the Thai Government would support a fund-raising plan by the airline, once requirements for stated guarantees on Thai’s loans are eliminated (ie the Finance Ministry is becoming increasingly fed up with providing financial support to Thai Airways).

The carrier’s shareholders will now vote on the capital increase plan on 28-Mar-2010. The carrier also received government approval for its plans to purchase seven medium-range and to lease eight long-range aircraft, in an investment worth USD1.1 million. The new aircraft, to be delivered between 2010 and 2014, will reduce the carrier’s operating costs and reduce the carrier’s average fleet age. Thai plans to decommission 25 aircraft that are over 20 years old in the next 15 years.

Shares in Air China, China Southern and China Eastern gained 4.4%, 4.2% and 2.8%, respectively, yesterday in Hong Kong trading. Hong Kong stocks reached their highest close in nearly two weeks yesterday, led by airline, financial and consumer counters on investor expectation that China will allow the Yuan to appreciate, boosting the outlook for those sectors.

On the other end of the spectrum, Skywest Airlines (Australia) shares slumped 9.2% yesterday. The carrier plans to add an 180-seat A320 to its fleet in Jul-2010, to support increased mining-related demand in West Australia. Skywest's seat capacity has quadrupled in the past three years due to fly-in fly-out mining contracts.

Meanwhile, Singapore Airlines reportedly plans to increase fares by approximately USD36-71 per sector from 01-Apr-2010, due to improvements in demand, and reportedly returning fares back to pre-crisis levels, according to reports in The Straits Times. Shares in the carrier gained 1.7% yesterday.

AirAsia Regional Head of Treasury, Aireen Omar, told Reuters, that the carrier is on track for double-digit passenger growth in 2010, with the carrier expecting improved passenger load factors in 1Q2010.

He added that “overcapacity is not a concern” for the carrier, which will take delivery of 16 aircraft in 2010 (to replace older B737 equipment in Thailand and Indonesia). AirAsia is scheduled to take delivery of further 89 new aircraft between 2011 and 2015.

Meanwhile, foreign ownership levels in the carrier have increased from approximately 38% a year ago to approximately 50% currently. Shares in AirAsia remained stable yesterday, and have risen just 1.5% so far in 2010. 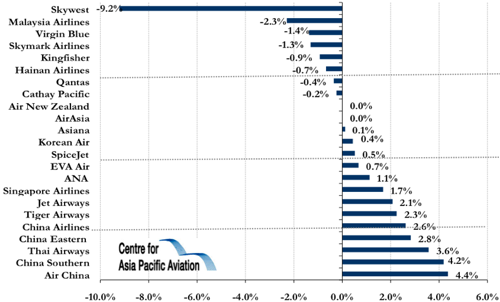