Thai Airways plans to slow its capacity growth in 2018 after growing by more than 5% in 2017, for only the second time in a decade. The parent airline expects annual ASK growth of up to 3% over the next few years, including 2018, as it shifts focus to product and profitability improvements.

Thai Airways plans to retrofit its 777-200ER fleet in 2018 as part of a push to offer lie-flat business class seats across its long haul fleet. Thai Airways is also introducing a new premium product for its regional fleet, which will debut in 2018 on a retrofitted A330-300s.

The group is only expanding its fleet by one aircraft in 2018: five A350s will be delivered, and two 777-200s and two 737-400s will exit the fleet. Thai Airways essentially has to manage with a smaller fleet as several aircraft will be out temporarily during the year for retrofits, including 787-8s, which will receive crew bunks to enable long haul operations. 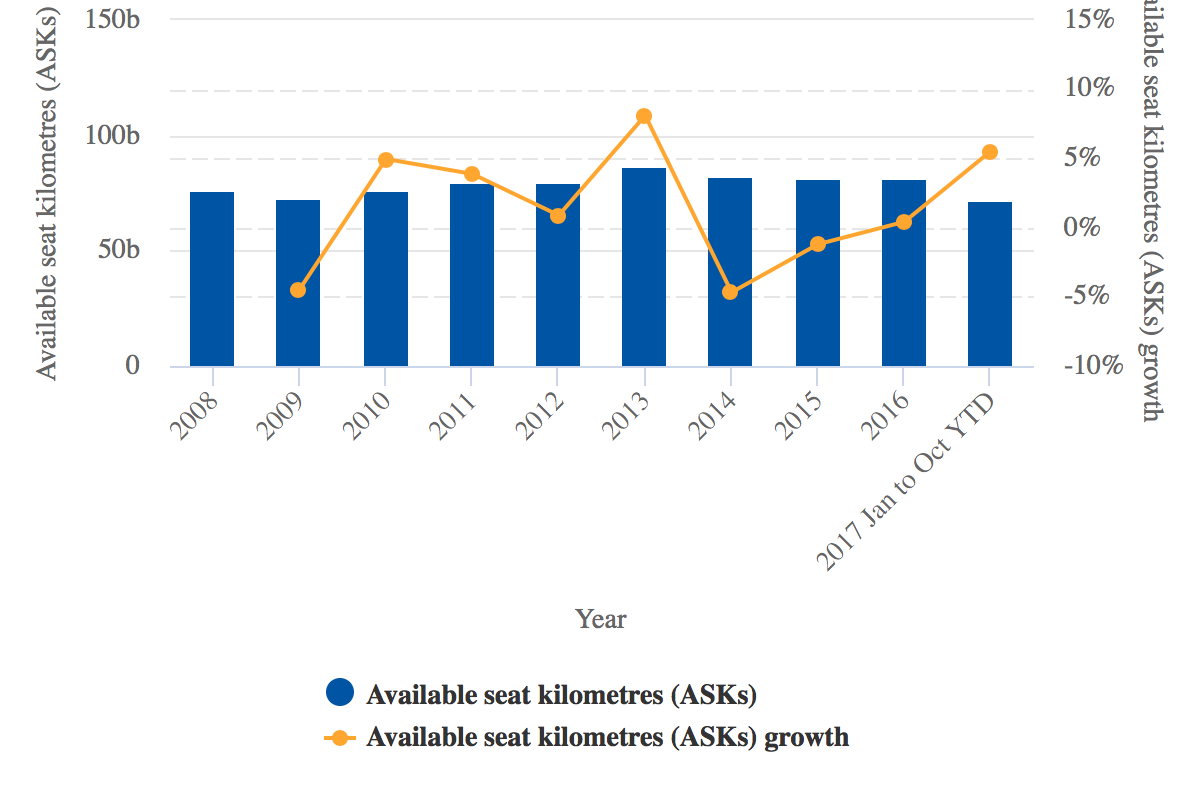 Expansion in Europe, which accounts for 30% of total Thai Airways ASKs, has been the main driver of the recent growth. Thai’s ASKs to Europe increased by 6.2% through the first 10 months of 2017, and are currently at record levels. 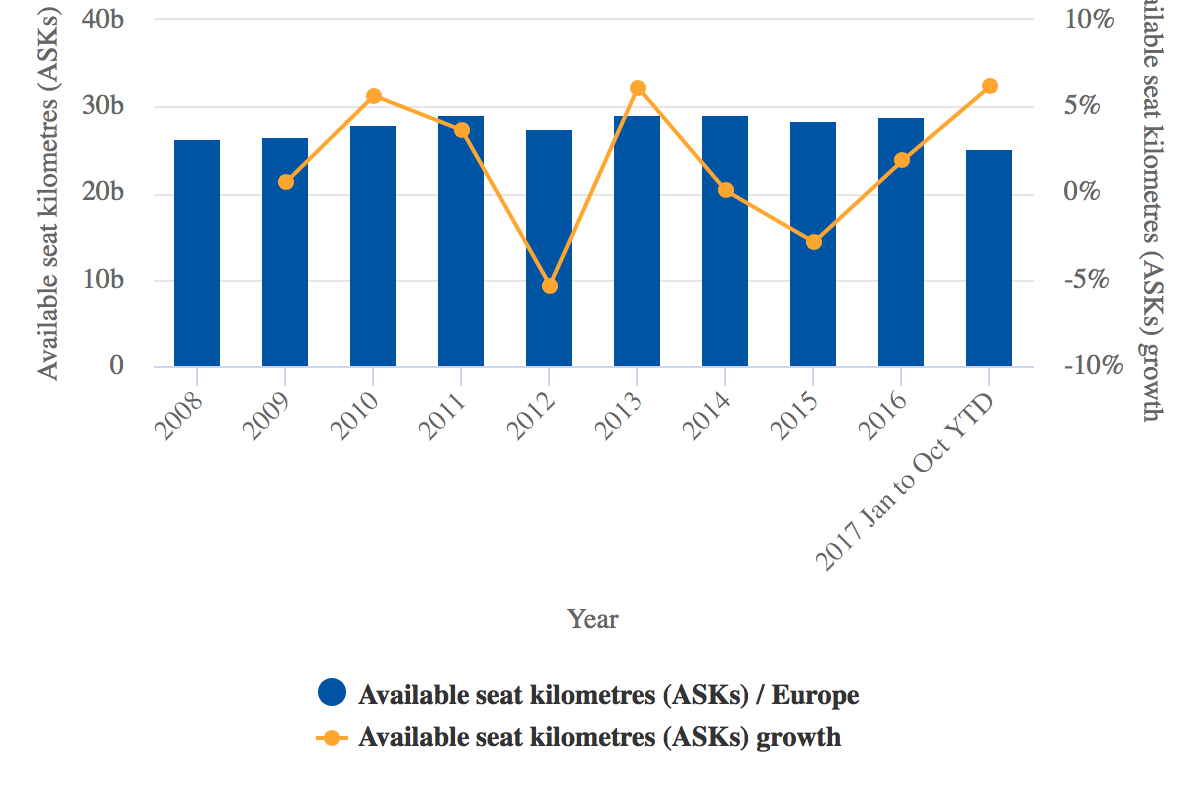 In addition to Europe, in 2017 Thai has resumed expansion regionally within Asia and to the South Pacific (Australia/New Zealand). Domestic capacity has continued to decline, but it only accounts for 2% of total ASKs.

Asia accounts for 49% of total ASKs at Thai Airways. 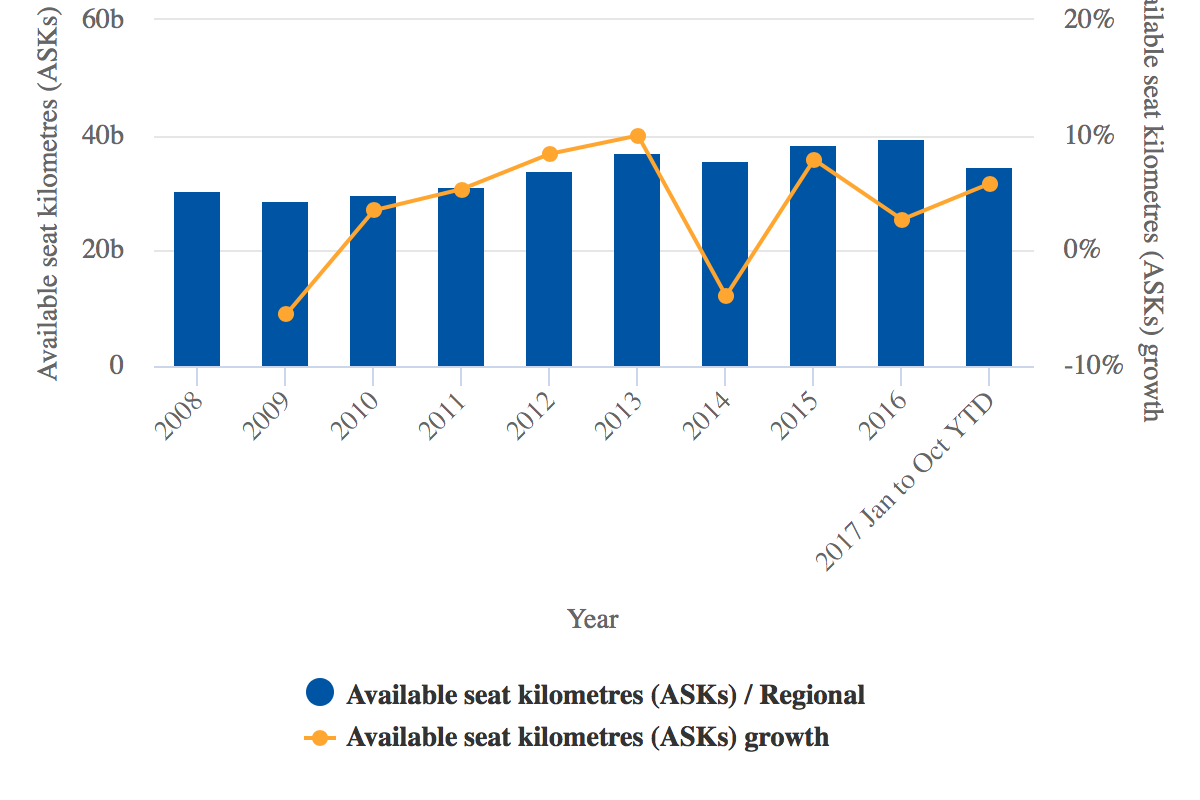 With the exception of Europe, Thai no longer has any long haul routes outside Asia Pacific. Its only services to Africa and North America were dropped in 2015. 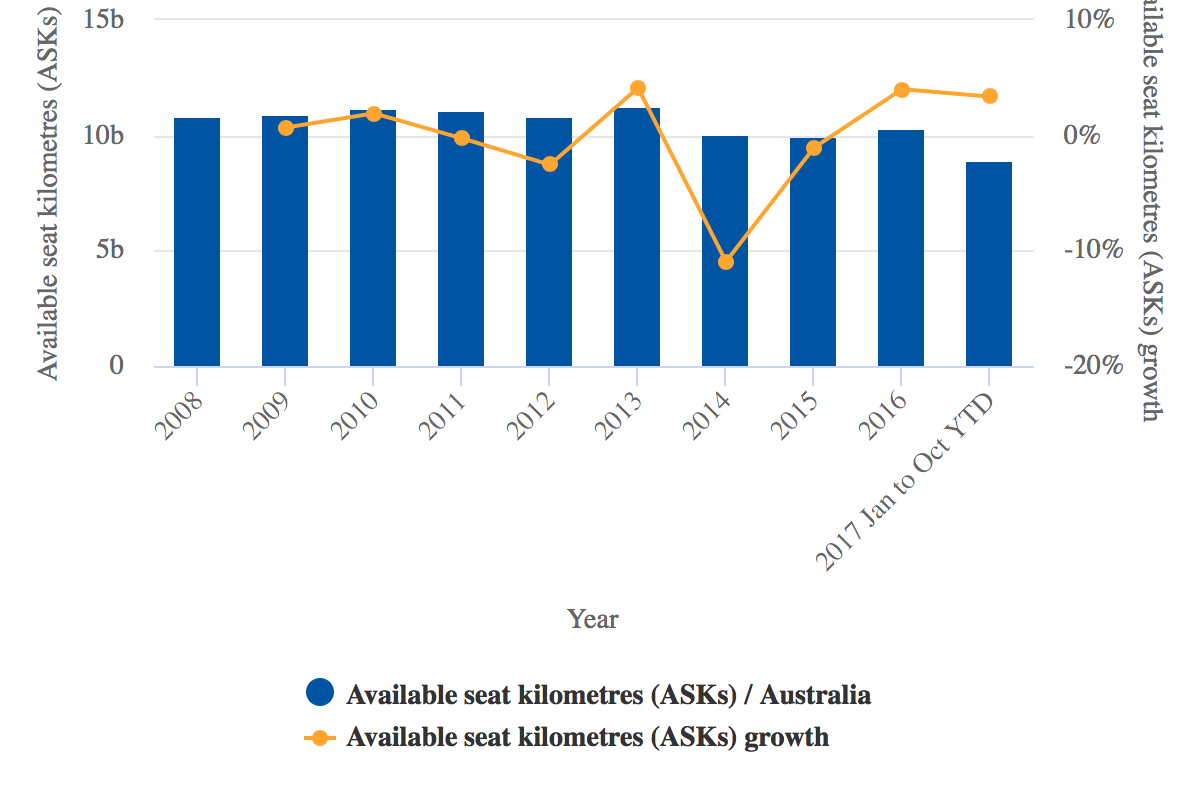 Thai Airways VP for alliances and commercial Krittaphon Chantalitanon told CAPA on the sidelines of the 24-Oct-2017 AAPA Assembly of Presidents that Thai Airways is planning ASK growth of up to 3% in 2018. The group expects broadly similar growth for Europe and Asia Pacific.

Thai Airways is not expecting to launch any new destinations in 2018, with the possible exception of resuming flights to the US at the end of the year. The slight increase in capacity to Europe will be driven by the year-round impact of the 16-Nov-2017 launch of Vienna, which became Thai’s 13th destination in Europe.

In Asia, Thai Airways is planning to add a third daily flight to Taipei and is evaluating other potential frequency increases. Additional flights are expected to Korea and Japan, where restrictions on growth were recently lifted after ICAO removed the red flag it assigned to Thailand in 2014.

Modest capacity growth for the next five years

Over the next few years, Thai Airways plans to continue to pursuing relatively modest capacity growth of approximately 3% per annum. Faster growth could potentially be pursued during a later phase of the new 10-year fleet plan if Thai Airways decides to acquire widebody growth aircraft, subject to government approval.

In 2017 the airline also took delivery of five A350s, along with two 787-9s, and at the same time retired two A330-300s. The net increase of five aircraft represented the biggest gain for the parent airline in several years, driving the faster ASK growth rate. Thai Airways has also been improving aircraft utilisation levels as part of an overall effort, under its transformation programme, to improve efficiency and reduce costs.

Thai Airways has also been focusing on improving its in-flight product and the consistency of its product. The airline has historically operated several aircraft types with several different configurations, providing an inconsistent product in both the regional and long haul markets.

Mr Krittaphon said that in Sep-2017 Thai Airways had introduced a new generation of business class seats on the new 787-9 fleet. These seats are lie-flat in a-1-2-1 configuration, but are not staggered like the configurations on the A350, 777-300ER or A380.

Thai Airways has narrower business class seats on the 787-8, which has a lie-flat product, but in a less desirable 2-2-2 configuration. Thai pursued this configuration because the 787-8s were initially intended to operate only regionally within Asia. Thai Airways took delivery of six 787-8s in 2014 and 2015.

In 2016 Thai Airways decided to start operating the 787-8 on long haul routes, and unveiled plans to install crew bunks on all six 787-8s. However, the airline is not planning to retrofit the business class cabin as the crew bunks are installed. The aircraft are too new to justify cabin retrofits, and the seats already meet Thai’s new standard of offering lie-flat product on all long haul flights.

As CAPA highlighted in a Dec-2016 analysis report, Thai Airways was originally planning to install crew bunks on the 787-8 fleet in 2017.

However, the start of the project was delayed, and Mr Krittaphon said the first 787-8 is now being retrofitted. The current schedule is for the last of the six 787-8s to be retrofitted in 1Q2019. He said that once the crew bunks are installed, the plan is to deploy the 787-8 on thinner long haul routes, such as Brussels and Moscow.

Thai Airways currently uses its 787-8 fleet on the Bangkok to Beijing, Brisbane, Delhi and Ho Chi Minh, Jakarta, Nagoya and Perth routes. The new 787-9s have been deployed on the Bangkok-Auckland route.

Thai Airways has historically used its 777-200ERs fleet for thinner long haul routes. The airline currently operates six 777-200ERs, which were delivered in 2006 and 2007 and will not be phased out in the new five-year fleet plan.

The plan has been to retrofit the 777-200ER business class cabin by swapping out angled flat seats in 2-2-2 configuration for lie-flat seats in 1-2-1 configuration. The original plan was to retrofit all six of these 777-200ERs in 2017, as CAPA stated in the Dec-2016 report. Mr Krittaphon said all six aircraft are now slated to be retrofitted in 2018.

The 777-200ER retrofit is being undertaken as part of an initiative to make sure all of Thai’s long haul flights offer lie-flat seats in business class. This will be achieved by retrofitting the 777-200ERs and replacing the 747-400s. However, there will still be some differences in the product, depending on the aircraft type.

Thai Airways currently does not have a consistent premium product in Europe or Australia, which makes it difficult for the airline to win corporate or business traffic. While premium demand is relatively limited to and from Thailand, Thai Airways is trying to attract more sixth freedom premium traffic, including from Australia to India and Europe.

Some flights to Europe are currently operated with the 777-200ER or 747-400. Thai Airways also still uses both types on some Australia flights.

In Australia, Thai plans to offer lie-flat business class seats on all flights by mid-2018. The airline is now in the process of upgrading Melbourne, and plans to upgrade Sydney in 1H2018.

A lie-flat product was first offered in the Melbourne market on 1-Oct-2017, when the airline transitioned seven weekly frequencies from 777-200s to A350-900s. Thai Airways has a twice daily service to Melbourne, and on 1-Feb-2018 plans to introduce the A350-900 on the other seven frequencies, which are now operated with 777-300s

Mr Krittaphon said the company was planning to upgrade Sydney from 11 weekly 747-400 flights to twice daily A350 flights in 1H2018, as additional A350s are delivered. The new twice daily service will improve connectivity, while increasing total capacity by a modest 7%.

Overall, Australia capacity will increase only slightly, since Thai Airways' capacity to Melbourne will remain flat as it transitions from 777s to A350s.

Thai Airways is also planning to introduce a new regional premium product. The new business class product for short and medium haul routes will be a significant improvement over the current product now on Thai’s A330s, 777-200s and 777-300s, but will not be lie-flat.

Mr Kittaphon said Thai plans to retrofit two A330-300s in 2018 and use these aircraft as a prototype of its new regional business class product. The product will likely then be used in the aircraft Thai acquires to replace its 777-200s and 777-300s.

The rest of the A330 fleet may also eventually be retrofitted, providing a consistent product across the regional network. The A330 and 777-200 business class cabins have a 2-2-2 configuration while the 777-300 has a 2-3-2 configuration. The seats are angled flat or recliner style, depending on the aircraft.

Product inconsistency and too many configurations have historically been a major weakness of Thai Airways. The airline group is striving to resolve these issues finally, as it renews its fleet and introduces new premium products.

By offering a better and more consistent product, the airline is hoping to offset some of the yield declines it has experienced across nearly all of its markets in recent years due to intensifying competition. The airline has been mainly focusing on cost reductions under its transformation programme, but there are also opportunities on the revenue side.

Refraining from significant capacity growth should aid these efforts and improve its long term outlook. Thai Airways enters 2018 confident it can complete its transformation and post a better than break even result for the first time since 2012.