Shares in several leading Asia Pacific carriers weakened on Friday, as concerns grow about a protracted global economic downturn. Airlines are reacting by continuing to reduce their capacity levels to/from the region. Some countries are worse affected, including Thailand.

Seat capacity to/from the region is down by 2% in May-2009, and within the region capacity is up by 2%. Figures reported for Asia last month were a 1% decline to/from the region, and a rise of 3% for intra-regional capacity. OAG reports the Asia Pacific is the only region to report worsening capacity levels this month compared to April.

Thailand’s Air Transport Regulatory Bureau reports international airlines and freight operators have cut 1,536 Thailand-bound flights from their schedules for Mar-2009 to Oct-2009, due to the global economic crisis and the tourism downturn, or around 48 flights per week.

The number of passenger flights for the Summer schedule has fallen 2.6% to 938, though the number of international airlines serving Thailand remains unchanged at 90. The Nation reports Thai Airways cut 170 domestic and international flights from its May-2009 schedule, due to weak forward bookings. The addition of three more weekly Bangkok-Los Angeles frequencies next month has been deferred until the swine flu outbreak is resolved. Thai Airways shares slumped 7.4% on Friday.

However, some carriers (mainly LCCs and Middle East airlines) are increasing capacity to Thailand, led by Tiger Airways (increase from 21 to 35 flights per week), as well as AirAsia, Cebu Pacific, Emirates, Gulf Air and others.

Shares in Qantas and Virgin Blue fell 1.8% and 3.7%, respectively, on Friday, while Singapore Airlines was virtually steady. 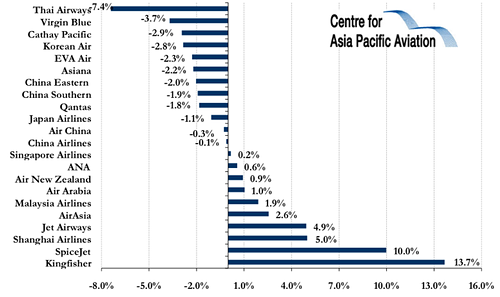