Thai Airways shares jumped a further 4.9% yesterday after Tuesday’s 8% gain, as the carrier reported a better than expected profit in the three months ended 31-Mar-09. Operating profit surged 147.6%, thanks to a 45% fall in jet fuel prices and a massive foreign currency gain (which accounted for more than half of the carrier’s operating profit). The 26.1% plunge in revenue is of concern, reflecting a 20.3% reduction in RPKs.

Singapore Airlines’ shares advanced 1.7%, while rival Qantas was up 0.3% and Virgin Blue was steady. The Bureau of Transport and Regional Economics reports the most extreme period of domestic fare discounting since records commenced in 1992.

Elsewhere, Cathay Pacific shares eased 1.1%. The carrier yesterday confirmed it was notified by Hong Kong health authorities that a passenger on a CX flight from San Francisco on 11-May-09 has since tested positive for swine flu. 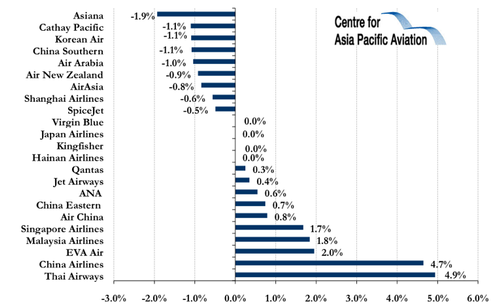 NB: For daily updates on American aviation stock prices and a complete wrap of the day's breaking news, sign up now for a complimentary subscription to America Airline Daily.

In addition, the Company gained on foreign currency exchange arising from translation of the Company’s outstanding loan into Baht terms at the end of period, amounting to THB 4,609 million.  As a result, profit before tax was THB 8,064 million, which is an increase of THB 4,807 million or 147.6% from the same period last year. The net profit was THB 7,869 million or 4.63 baht per share, which is higher than a net profit of THB 2,216 million or 1.30 baht per share of the same period last year. EBITDA was THB 9,512 million.