Nok Air CEO, CEO, Patee Sarasin stated the LCC, which is 39% owned by Thai Airways is ready to cooperate again with its major shareholder. Mr Sarasin told eTN, “we have definitely buried the hatchet with Thai Airways, as we are not in position to fight in the current environment". He added, with the arrival of new Thai Airways Chairman, Wallop Bhukkanasut, "we have now a strong stable partner to discuss and we agreed on many issues".

The carriers plan to coordinate on schedules, distribution, marketing, loyalty programmes and package holidays. Mr Sarasin added the carrier has become profitable again and forecast it will transport over two million passengers in 2009, as it expands domestically. Thai Airways is planning to transfer some domestic routes to Nok Air, including routes to Phitsanulok, Mae Hong Son and Khon Kaen initially, but will maintain domestic trunk routes that support its international network.

Also in the Thai market, AirAsia Group subsidiary, Thai AirAsia, stated expects to report a profit in 2009, especially from Oct-2009 onwards, following a recovery in bookings, and will set up a base in Phuket.

Virgin Blue's shares fell 2.7% yesterday, but have gained in early morning trading, as the carrier confirmed it raised AUD98.3 million through the retail component of its new share issue, enabling the carrier to be “better positioned to withstand the current difficult operating environment and to take advantage of growth opportunities in the sector as they arise”, according to CEO, Brett Godfrey.

The fully underwritten retail offer experienced “overwhelming demand”, meaning the carrier will scale back applications made by shareholders in excess of their entitlements. Virgin Blue added that it has raised a total of AUD231.4 million from retail and institutional shareholders by selling 1.16 billion new shares.

The share prices of the three major Chinese carriers fell yesterday, after the National Development and Reform Commission, the nation’s top economic planning body, announced plans to increase jet fuel prices by 5.3% from midnight. The increase, the fourth of the year (one in Mar-2009 and two increases in Jun-2009) have increased the price of fuel by as much as 25%. China Eastern's shares were down 5.8% yesterday, with Air China and China Southern falling 4.6% and 2.9%, respectively. Hainan Airlines and Shanghai Airlines were up slightly, by 0.6% and 0.9%, respectively, in line with increases in the broader market.

Cathay Pacific's shares fell 1.3% yesterday. The carrier has stated that it expects its 2009 performance to improve from 2008 levels, despite unfavourable market conditions in 1H2009, due to signs of a recovery in the global economy and improved booking levels. 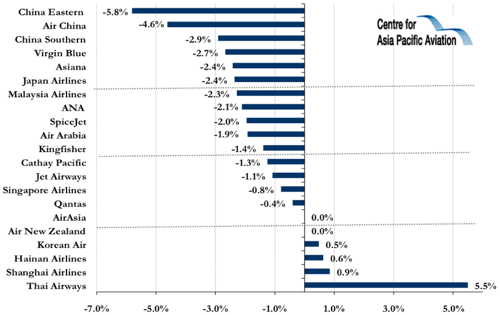