Shares in Thai Airways International rose as much as 9.4% to a four-year high on Thursday after the European Commission dropped charges against it relating to price-fixing. The decision will mean the carrier will be able to write back the large provisions it had set aside to cover any fine.

Tisco Securities stated the airline had built up THB4.29 billion (USD145 million) in provisions related to the charges since 2008 and that the writeback should help boost revenue this year. The broker added: "If the airline reverses the provisions in the fourth quarter, that might result in earnings this year of about THB23.9 billion, which would become its best year.” The broker raised its recommendation on the stock to "buy" with a price target of THB57/share.

Meanwhile, Kasikorn Securities expected the airline to write back all of the provisions next year and forecast that would lift its earnings in 2011 by 31% from its current projection of THB9.6 billion. Prior to the EU development, analysts had on average expected Thai Airways to report a 28% rise in 2010 net profit to THB9.4 billion with THB11.17 billion in 2011 according to Thomson Reuters I/B/E/S.

Qantas to keep A380 grounded for at least another 48 hours

Qantas stated it would keep its A380 fleet grounded for at least another 48 hours after a mid-flight turbine explosion adding that it is continuing its intensive inspection programme of the Rolls-Royce engines. Qantas shares rose 2.5% yesterday to AUD2.87.

Indian LCC SpiceJet stated KAL Airways and Kalanithi Maran raised their direct holding in SpiceJet to 38.66% through the purchase of an additional 7.68% stake, or 31.08 million shares, for INR1.5 billion (USD33.1 million). The share price under the open offer is nearly 35% lower than the current market price. Shares in SpiceJet declined 3.7% yesterday to INR88.85.

Taiwan’s two largest carriers stated they would lease a combined eight large aircraft before orders for their respective new aircraft are delivered. The leased aircraft will be used to match increased demand on cross-Strait services. China Airlines will lease five A330s from an undisclosed company with deliveries scheduled from Nov-2010 until the end of 2012 while EVA plans to lease three A330-300 aircraft in 2011. Both airlines have ordered new aircraft that are due for delivery between 2011 and 2015

Shares in China Airlines rose 1.1% on Thursday, outpacing a broad market that ended lower, while EVA Air’s shares were up 0.2% on the day.

Phillip Securities Research commented: “In our initial estimates, we expected a stronger y-y RPK growth of 7% for 2QFY2011 based on expectations of a stronger demand for air travel due to gradually improving business and economic conditions. However, the actual data for the quarter showed that the y-y growth was merely 1.5% as compared to the same quarter last year.” The company continued: “While we expect profits for SIA to be sustained for the rest of the financial year, we do not think that the price of the stock is attractive at the moment." 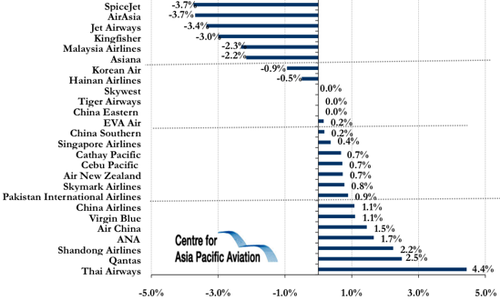