TAROM has unveiled plans to develop its network in 4Q2012 and 2013 at Iasi which could potentially see a large scale expansion from the secondary Romanian city. However this comes as central European low-cost carrier Wizz Air continues to expand its Romanian network, both in the capital Bucharest and secondary cities, incuding Cluj, Craiova and Tirgu Mures. Wizz Air’s continuing expansion is likely to see it overtake TAROM as Romania’s largest passenger carrier.

Iasi is Romania’s fourth largest city based on population (263,000 as of the 2011 census) and is located in the northeast of the country close to the border with Moldova. Iasi is located approximately 400km north of Romania’s capital, Bucharest.

Known as the “Cultural Capital of Romania”, Iasi is a leading centre of academic, artistic, cultural and social life. The city is also an important economic centre in Romania, with several international companies with operations there including US-based Amazon.com.

Iasi International Airport has reported significant passenger traffic growth over the past seven years with annual traffic increasing from 42,000 passengers in 2005 to 184,000 in 2011. In 2011 the airport announced plans to undergo a modernisation programme,  which will see EUR1.8 million invested into the airport. The modernisation programme is expected to be completed in 2015.

TAROM to launch up to 11 new routes from Iasi

TAROM’s recent Iasi announcement outlined the launch of services to Rome Fiumicino, Paris Charles de Gaulle and London Heathrow in winter 2012/13 and in spring 2013. The airline also highlighted eight other destinations under consideration to be launched to from Iasi, including in Italy, Germany, Netherlands, and domestically within Romania.

This expansion will exponentially increase TAROM’s Iasi network, considering it currently only operates domestically to Bucharest from the airport. There is limited airline activity at Iasi Airport with only Carpatair (to Timisoara) and Austrian Airlines (to Vienna) serving the airport in addition to TAROM (Bucharest).  Wizz Air has not yet entered the Iasi market. 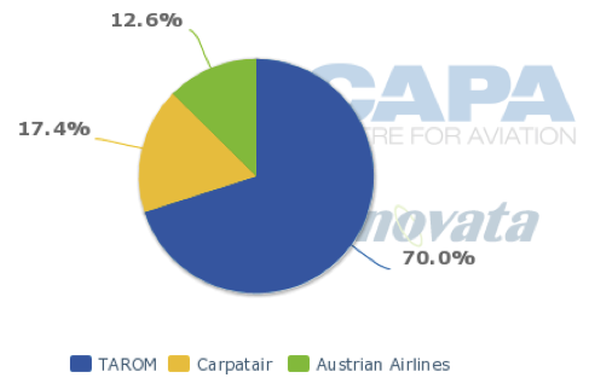 TAROM’s first new route from Iasi, three times weekly Iasi-Rome Fiumicino service, is to launch on 09-Dec-2012. This route was previously operated by Carpatair, which launched the service in Apr-2011. The airline has since suspended the service.

TAROM also said it was considering an additional eight destinations from Iasi to further expand its network in 2012/13:

Other routes TAROM is considering from Iasi

Three domestic routes feature on this list including Iasi to Cluj, Constanta and Timisoara. If launched, these will help grow Romania’s domestic market, which currently accounts for only 9% of overall seats in the market, according to Innovata data.

There is a large overlap with the proposed international destinations from Iasi with TAROM’s Bucharest network. TAROM currently serves Rome Fiumicino, Paris Charles de Gaulle and London Heathrow from Bucharest as well as the other proposed destinations including Amsterdam, Cluj, Frankfurt, Munich and Timisoara. However, TAROM does not currently operate services from Bucharest to Turin or Verona.

TAROM is already receiving connecting Iasi traffic onto and from its international services at Bucharest. TAROM currently operates approximately 31 times weekly on the short domestic route connecting Iasi with Bucharest.

The expansion at Iasi could be a move by TAROM to differentiate itself from Wizz Air, which continues to expand at Belgrade. The new Iasi routes give TAROM a unique product and allow the flag carrier to avoid competing head to head with Wizz Air.

TAROM has been struggling in recent years and the adjustment in its network strategy could be seen as an attempt to improve the carrier’s position in the market ahead of a long-planned privatisation. In addition to Wizz Air, TAROM faces increasing competition from smaller Romanian carrier Carpatair.

Elsewhere in Romania, Wizz Air plans to further expand its network in summer 2013 with several routes which have been announced recently. These include Wizz Air’s first service from Craiova, which will become the sixth Romanian airport the LCC operates from.

Other Wizz Air expansion in Romania in summer 2013

Currently Wizz Air ranks second behind TAROM overall in the Romanian market based on capacity share. But Wizz Air is expanding more rapidly than TAROM and will likely take over the number one position in 2013.

TAROM currently accounts for 25% of capacity in the overall market while Wizz Air has a 23% capacity share. The upcoming route expansion will see Wizz Air overtake TAROM unless TAROM unveils additional expansion. 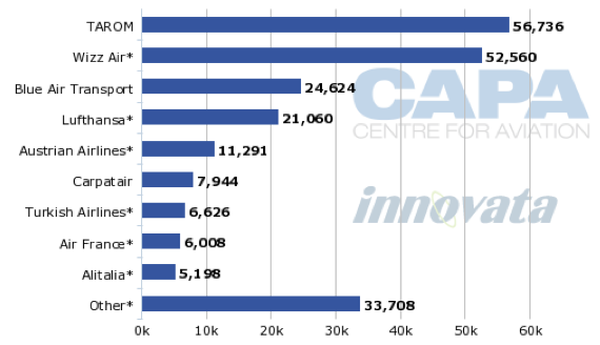 A significant difference is seen between Romania as a whole and Bucharest when comparing TAROM and Wizz Air’s operations. At Bucharest TAROM has a 31% capacity share compared to Wizz Air’s 15.5%. This shows how the majority of TAROM’s operations are focused from TAROM’s Bucharest hub compared to Wizz Air’s point-to-point network spread across Romania. The expansion of TAROM’s Iasi network will see the flag carrier spread its operations out across a new second hub, particularly if TAROM decides to move ahead with all the proposed expansion rather than just one or two new routes. 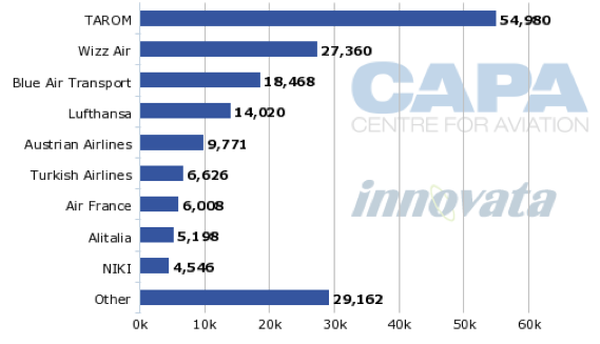 TAROM is facing increasing competition from central European low-cost competitor Wizz Air in the Romanian market. Wizz Air’s planned route expansion from destinations across Romania will see it continue to move closer to becoming Romania’s largest passenger airline. TAROM’s network expansion at Iasi, if pursued entirely, could allow it to retain its leading role in the market but the sustainability of the proposed Iasi network is questionable. With Iasi passengers able to easily connect to TAROM’s international network at Bucharest and the relatively small size of the Iasi market, the large international expansion from Iasi may prove not to be a viable option.