TAP Portugal: will its 2012 annual report help to sell the company?

TAP Portugal’s 2012 annual report, published at the end of Jul-2013, gives food for thought to anyone interested in bidding for Portugal’s national airline.

The bad news is that the group made another net loss, its balance sheet was woefully under-capitalised, with high debt levels and negative equity, and labour productivity was mediocre versus European peers. The Portuguese Government has reiterated its intention to re-launch the privatisation process in 2013.

So how should the Government tell the story to prospective buyers? The good news is that losses narrowed, cash flow improved and net debt fell. Moreover, RASK increased, ex fuel CASK remained under control and labour productivity improved.

Further gains could be made, for example through higher load factors and more headcount reductions and, perhaps, by focusing the long-haul network even more sharply on its Latin American niche. In addition, heavily loss-making non-core businesses should be sold or closed. More time may be necessary to demonstrate progress is being made.

The TAP Portugal Group improved its net result by EUR46 million in 2012, narrowing its loss to EUR31 million. At the operating result level, it turned a loss of EUR18 million in 2011 to a profit of EUR34 million in 2012. Total operating revenues grew by 8% to EUR2,682 million. While the group saw its net loss narrow, 2012 was its fourth successive year of losses.

The principal operating subsidiary of the group is TAP S.A., which accounted for 91% of group revenues in 2012. TAP S.A. consists of TAP Air Transport, TAP Maintenance and Engineering (Portugal) and TAP Servicos (which provides admin and support services to the group). TAP S.A. does not include the loss-making Brazilian maintenance segment or the ‘Holdings and others’ segment, which is also loss-making. TAP S.A. posted a net profit of EUR21 million, up from EUR3 million in 2011, and has been profitable every year since 2009. 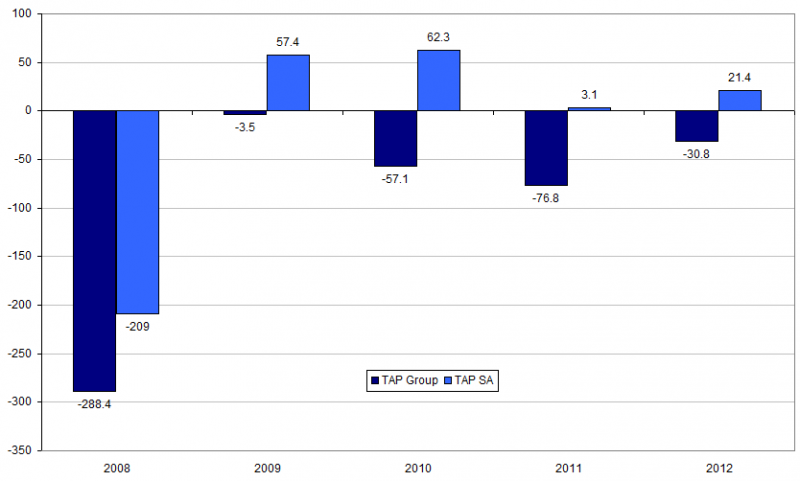 Air Transport, the biggest segment by revenues, returned to profit 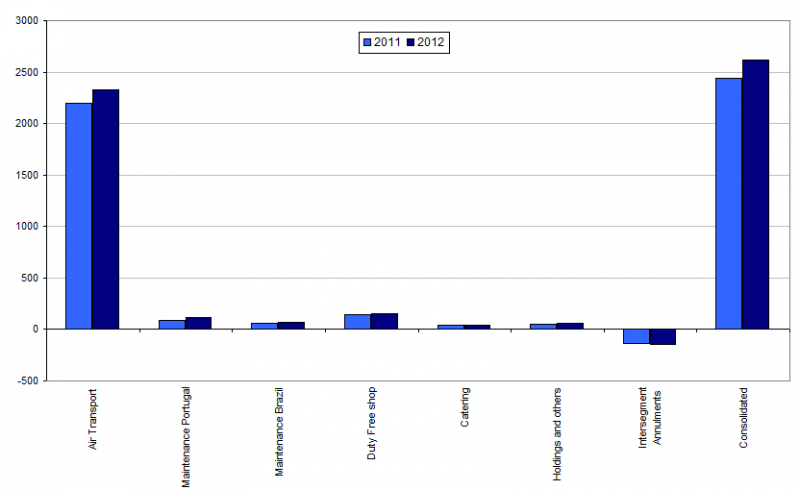 While Air Transport is the major revenue contributor, it is only the number two segment by profit, after Maintenance Portugal. Nevertheless, Air Transport succeeded in turning a loss in 2011 into a profit of EUR21 million in 2012.

In spite of profits in Air Transport and the group’s second and third biggest segments, Duty Free and Maintenance Portugal, the group result was weighed down by heavy losses in the Brazilian Maintenance business and the ‘Holdings and others’ segment. Losses in the Brazilian business were reduced for the second successive year, reflecting a five-year restructuring programme launched in 2010, and TAP expects an acceleration in the improvement in its results in 2013. Nevertheless, the two loss-making segments must surely be candidates for sale or closure in order to increase the group’s appeal to prospective investors. It sold a controlling 50.1% stake in ground-handler Groundforce in 2012. 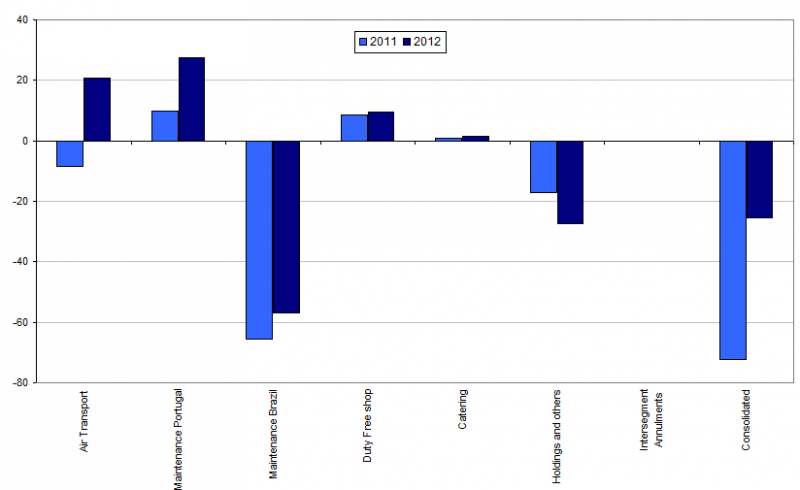 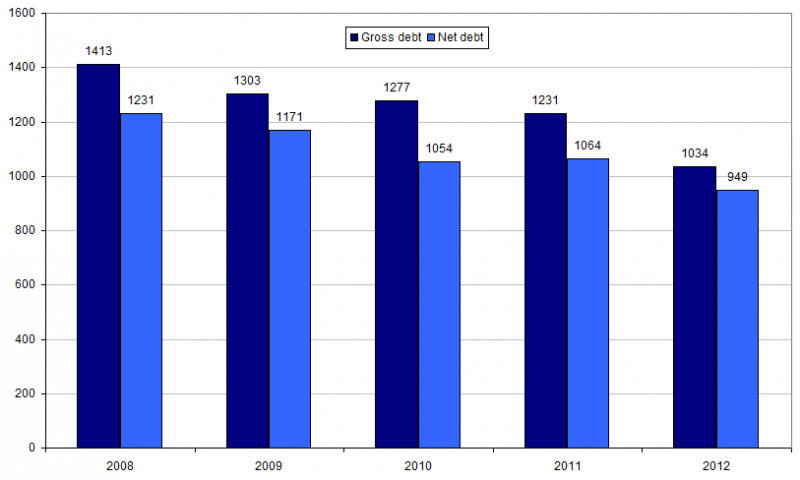 The group’s balance sheet weakness was acknowledged in the 2012 annual report by TAP’s Supervisory Board chairman Manuel Pinto Barbosa, when referring to the collapse of the privatisation process: “It is important to highlight the urgency in recapitalising TAP SGPS... In fact, the establishment, in the short term, of a solid capital base is an essential condition for the sustainability and future development of the Company”.

This underlines a tension that may continue to hinder the privatisation process if it re-starts. While TAP seeks fresh capital to repair the balance sheet, to fund future capex and to reduce the annual interest burden on its earnings, the government’s priority is to generate cash for the state coffers.

Fleet expansion was put on hold in 2012 as a result of the privatisation process, so that there was no change to the TAP Group fleet. The TAP fleet totalled 55 aircraft (39 medium-haul and 16 long-haul) with an average age of 11.5 years at the end of 2012. The fleet of subsidiary Portugalia consisted of 16 aircraft. 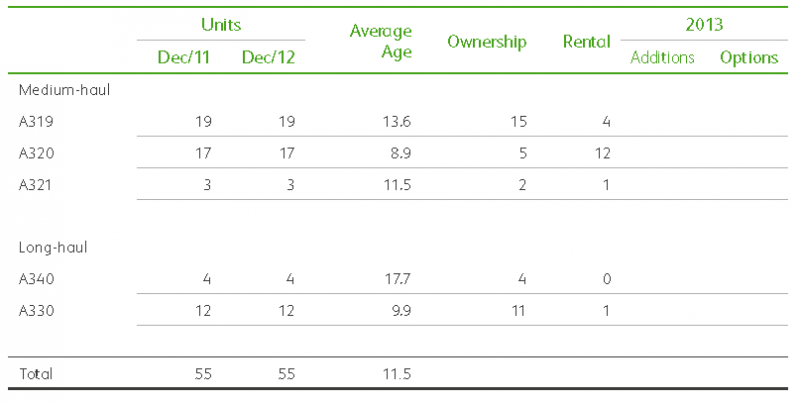 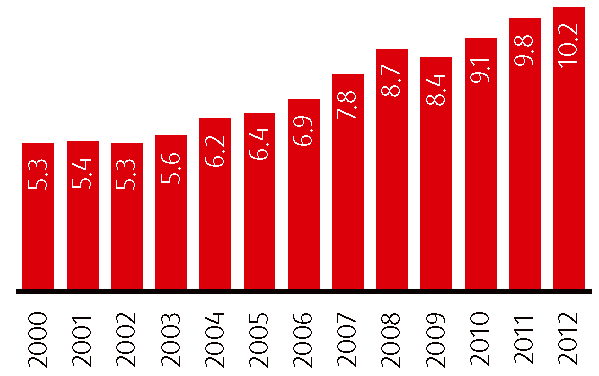 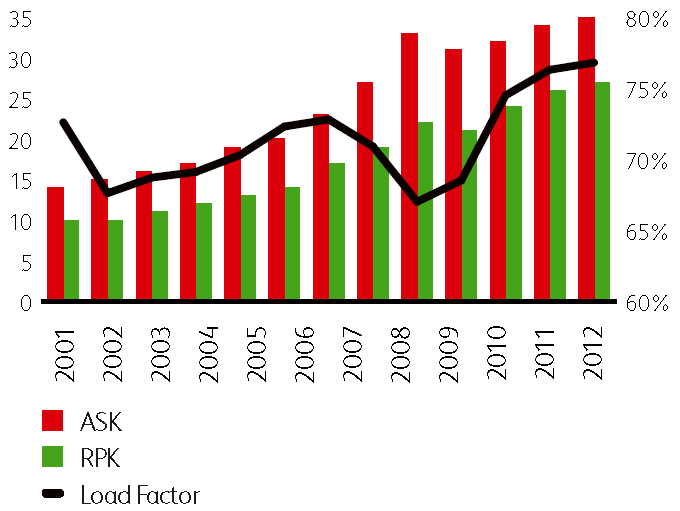 Its South Atlantic RPK growth of less than 2% underperformed against the AEA average of almost 9% in 2012 and was slower than the almost 9% growth enjoyed in this region in 2011. TAP’s cargo traffic (RTK) declined by 8.9%, more rapidly than the AEA fall of 3.4%.

Although traffic growth is constrained by a cap on the fleet pending a resolution to the privatisation process, there was continued growth in the first six months of 2013. TAP’s 1H2013 passenger numbers grew by 4.8% to 4.9 million and load factor gained 2.9 ppts to reach 76.9% (still below AEA levels). African routes saw growth of 6.1% in passenger numbers. TAP expects routes to the Portuguese regions of Madeira and the Azores to return to growth in the second half after passenger numbers fell by 1.7% in the first six months (growth resumed, at 5.3%, in June). 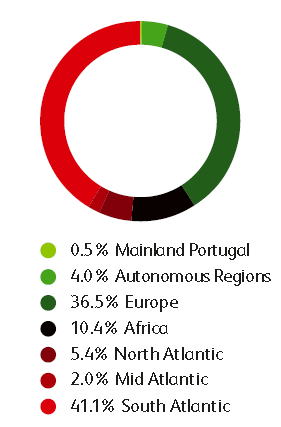 TAP ranks 13 out of 19 European airlines analysed in CAPA’s labour productivity rankings, but it improved in 2012 versus 2011 on key measures. It performs well against the peer group on labour cost per employee, but is weak on ATK per employee and revenue per employee. While the group’s labour productivity levels are diluted by its non-flying, ground-based activities, this analysis points to scope for further headcount reductions.

The chart below illustrates the development of unit costs and unit revenues of TAP S.A. from 2008 to 2012. TAP managed to pull off the relatively rare feat of both increasing RASK and decreasing CASK between 2008 and 2012. The RASK path has not been a smooth one, with annual increases and decreases in alternating years, but its underlying upward trend suggests a degree of pricing power. Pricing power can be ephemeral and is subject to market conditions, but additional load factor gains would help to push up RASK further and TAP still has room for improvement in this respect.

CASK fell quite dramatically in 2009, mainly due to lower fuel prices that year, and has risen each year since, also due to fuel price changes. CASK ex fuel fell each year, although the trend levelled out in 2012. With higher fuel prices, total CASK was up 2.7% in 2012, just below the 2.9% rise in RASK. This points to the need to refocus on ex fuel unit costs in 2013 in order to resume the downward trend and to be better positioned for any increase in fuel prices or weakening of RASK. 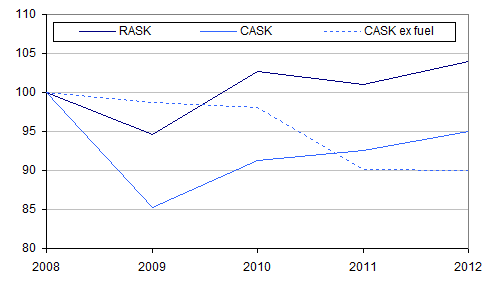 The ‘Finnair of the South’

This highlights some parallels between the two carriers. Both are physically located at the outer edge of Europe (Finnair to the North East and TAP to the South West) in small countries. Both have a niche in using their hubs to take European traffic from markets outside their home country to an intercontinental destination market (Asia in the case of Finnair and Latin America for TAP). TAP has more capacity in Europe than does Finnair, but both have similar capacity in their respective major long-haul markets. TAP also has a secondary niche in routes to Africa.

The Finnair Group was profitable in 2012, while TAP continued to post a net loss, and its stock exchange listed status has perhaps given it a greater commercial focus for longer. Finnair also has a much stronger balance sheet than TAP. Moreover, Finnair has been much more aggressive in pursuing its long-haul niche, with 10% growth in RPKs to Asia in 2012 compared with TAP’s growth of less than 2% on the South Atlantic. With strong growth in North America and Africa, TAP may risk spreading itself too thinly on long-haul, while growth in Europe will increase competition with LCCs. 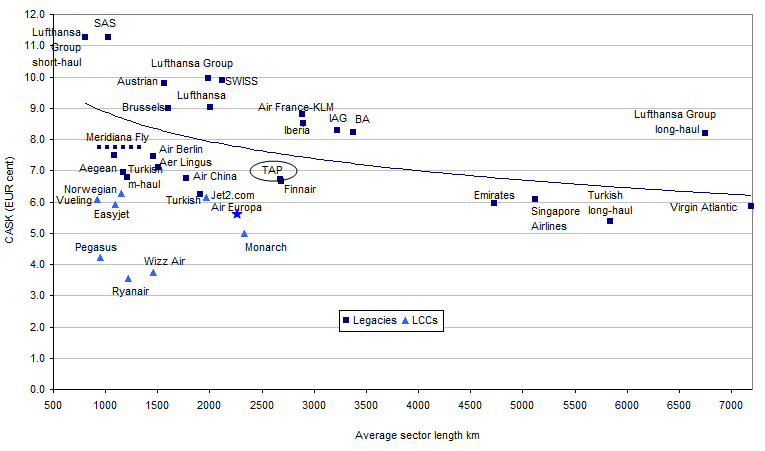 See related report: TAP Portugal privatisation. Will TAP be back in the shop window soon?