Portugal is widely expected to relaunch the privatisation of TAP Portugal before the end of 2014, possibly offering a 49% stake and a management contract. It is likely to seek assurances on issues such as the retention of TAP's Lisbon hub and connectivity with the Azores.

Although debt is falling, TAP needs fresh equity to increase its fleet expansion options. The privatisation must ensure that the airline, and not the government, benefits from external investment. Through operating leases, TAP has grown its fleet in 2014 (the first time since 2010), but its first Airbus A350 deliveries had to be pushed out to 2017 from 2015.

The delay since the first attempt at privatisation has allowed for some improvement in financial results, but the TAP Group remained in loss at the net income level in 2013 and in 1H2014. Selling or closing loss-making activities such as the Brazil Maintenance division may help the privatisation. In this first part of our analysis, we review TAP's financial track record.

In Part 2, we will look at TAP Portugal's competitive position and its appeal to potential bidders.

The TAP Portugal Group's results improved a little in 2013 over 2012 as the net result almost reached breakeven. A net loss of EUR1 million compares with a net loss of EUR32 million in 2012. Operating net income increased by 28% to EUR44 million, but this was only 1.6% of revenues. Total operating revenues grew by 1.5% to EUR2,723 million.

The parent company of the TAP Group is TAP SGPS SA, which is 100% owned by Portugal's state holding company Parpublica. The Group's principal operating company is TAP SA, which comprises the main TAP airline, the Portugal-based maintenance business (but not the Brazil-based maintenance division) and TAP Servicos (group support functions).

Other companies that are not part of TAP SA include TAP Maintenance and Engineering Brazil and TAPGER, a holding company with stakes in catering, airport shops, IT and health care services. Subsidiary Portugalia provides wet lease capacity to TAP. The group also has a minority stake in handling company SPdH.

TAP SA, the main operating company of the Group, is profitable

When the privatisation process was first launched in 2012, the TAP Group's most recent financial results were for 2011, when its net loss was EUR77 million. The improvement since then is considerable and the net result in 2013 was the closest that this perennial loss-maker has come to breakeven for several years.

The story for TAP SA is more positive. This company has reported a positive net result every year since 2009, although its operating margin has hovered only around the 2% market for the past three years.

Air Transport is the most important segment

Looking at the Group's results by functional segment, Air Transport contributed 90% of sales in 2013 and saw a 3.7% increase in its sales to more than EUR2.4 billion. The second biggest activity by sales was the Duty Free Shops division, whose sales grew by 5.2% to EUR163 million.

The Maintenance Portugal segment suffered a 34% drop in sales to EUR76 million, due to the difficult economic climate and competition from OEMs. Maintenance Brazil's sales grew by 5.1% to EUR75 million. 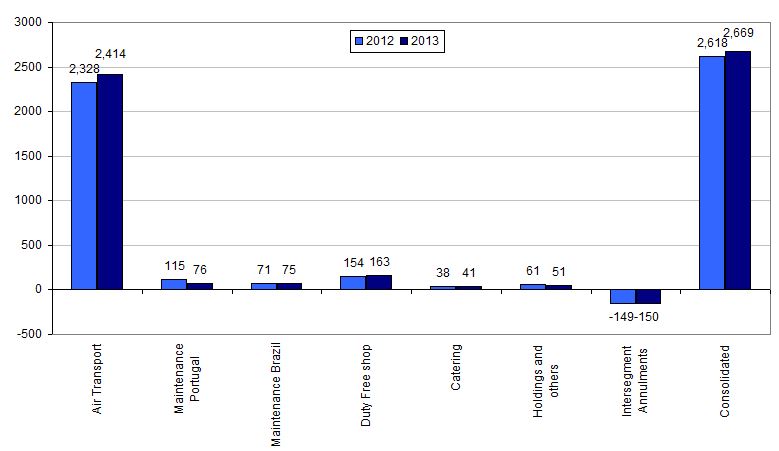 In addition to being the biggest generator of revenues, the Air Transport segment also contributed the most to net income in 2013, with a profit of EUR57 million (2012: EUR21 million).

The result of Maintenance Brazil was a net loss of EUR40 million. This was an improvement on its 2012 net loss of EUR57 million and its 2011 loss of 67 million. This business reached the third year of its five year restructuring programme in 2013, achieving both sales growth and cost reduction.

Nevertheless, Maintenance Brazil and the segment 'Holdings and others' continued to weigh on the Group result. These loss-making activities are not part of TAP SA, the group's main operating company, and this explains why it has been profitable while the group has been reporting losses at the net income level.

Although the Brazilian MRO business is making progress, the privatisation of TAP may be facilitated by the disposal or sale of these unprofitable activities.

The 2013 year end gross cash balance of EUR271 million was a significant increase on the EUR85 million level of a year earlier, but was still equivalent to only 36 days of Group revenues.

In spite of improving cash and debt balances, the Group's balance sheet continues to show negative book equity values, reflecting years of accumulated losses. At the end of 2013, the equity value was minus EUR373 million, a modest improvement on the minus EUR381 million figure a year earlier. However, this had fallen to minus EUR458 million at the end of Jun-2014, reflecting the 1H2014 net loss.

TAP's 2013 annual report comments that its financial structure is "a constraining factor relative to new investment". The fleet saw no expansion from 2011 to 2013, although TAP has procured six aircraft through operating leases in 2014. The recapitalisation of TAP Group must surely be a priority in the privatisation process.

TAP itself has not reported financial results for 1H2014, but the state holding company Parpublica published a 1H2014 report, in which it disclosed some details of the income statement and balance sheet broken down by activity.

Taking Parpublica data for its Air Transport activities as representing TAP, we can see that the TAP Group's sales fell by 13% year on year in the first half of this year and its operating loss widened by EUR36 million to a loss of EUR57 million. Nevertheless, its net loss narrowed by 12% to EUR82 million, thanks to lower interest costs and tax charges.

The fall in sales in 1H2014 was in spite of a 7.2% increase in passenger numbers, partly the result of new routes. In a press release, TAP reported that 1H load factor gained 3.2 ppts to reach 80.1% (which is better than the AEA average of 79.3% for the same period). The statement said that the growth rate in Europe was above the average for the airline, as was the growth in the Portuguese autonomous regions and the US.

Without full details, it is difficult to reconcile the contrasting trends of falling sales and rising passenger numbers. However, it may partly be explained by stronger traffic growth on short and medium haul than on long haul, but it may also partly reflect weaker pricing. In addition, the drop in sales may be due to lower levels of activity in the Group's non-flying segments.

According to the CAPA Fleet Database, the average age of the mainline TAP fleet is now 13.3 years, with the A340s now averaging almost 20 years. The average fleet age has risen steadily from around nine years in 2009, the result of the lack of new aircraft in the fleet.

The fleet of the group's regional airline Portugalia consists of six Fokker 100s and eight Embraer 145s, in addition to three Beechcraft operated by PGA Express (source: CAPA Fleet Database). The Beechcraft 1900Ds are to be replaced by ATR42-500s.

TAP has 12 Airbus A350-900s on order for delivery from 2017 to 2020 (the start of deliveries was delayed from 2015) and is thought to be considering adding seven more aircraft to this order.

Daily aircraft utilisation has been on a broadly improving trend for most of TAP's mainline fleet aircraft types in recent years. This has helped it to accommodate traffic growth in spite of a static fleet size.

TAP's years of no expansion in its fleet, enforced by its under-capitalised balance sheet and the lack of progress with its privatisation, have inspired it to improve its asset utilisation significantly. Not only is this visible in daily aircraft utilisation rates, but also in load factor gains (see below).

In 2013, TAP flew 10.7 million passengers, an increase of 5.1% over 2012. ASKs were flat, while RPKs increased by 3.4% (slower than passenger growth, reflecting the medium haul focus of the traffic growth). Passenger load factor gained 2.6 ppts to reach 79.4%, an increase of more than 12 ppts since 2008 and bringing TAP close to the average load factor for members of the Association of European Airlines in 2013 of around 80%.

As noted above, passenger numbers increased by 7.2% in 1H2014, but no further traffic details are available beyond the FY2013 data. 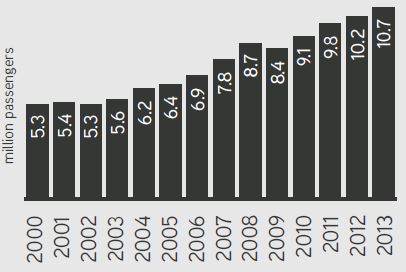 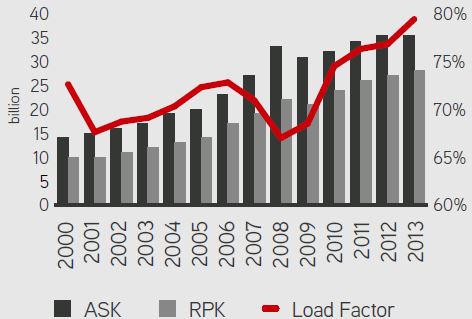 TAP's stable overall capacity, as expressed in ASKs, hides some variation in its capacity growth by region. In Europe (excluding Portugal), which represented almost two thirds of TAP's passenger numbers and 38% of ASKs, capacity was up by 2.8% and RPKs grew by 7.4%.

Although capacity was cut in Portugal (mainland and the autonomous regions), this only represented around 15% of passenger numbers and 4% of ASKs and so TAP's growth was skewed towards the medium haul.

The largest region of its long haul network, the South Atlantic, represented around 15% of passenger numbers and 40% ASKs, but TAP cut capacity here by 2.7%. On the Mid Atlantic, capacity was up by 3.2% and RPKs grew by 13.5%, but this region represented less than 1% of TAP's passengers and 2% of ASKs in 2013. 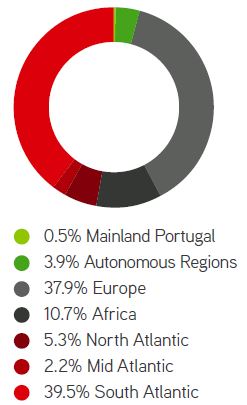 TAP SA has managed to increase RASK faster than CASK

Focusing on the operating income performance of TAP SA, the Group's main operating company, it last reported a loss in 2008. Its profit recovery in 2009, when unit revenue (revenue per ASK, RASK) was the result of CASK falling more quickly than RASK (helped by lower fuel prices in 2009).

Since 2009, both CASK and RASK have been on a broadly upward trend, but TAP has usually managed to grow RASK at a slightly higher rate than CASK (but RASK took a slight dip in 2011, resulting in a fall in operating income). 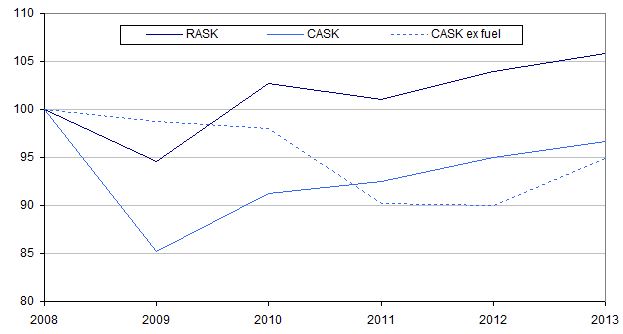 Bidders for TAP will be seeking higher returns

The level of profitability achieved by TAP SA is insufficient to generate value-creating levels of return on capital. If it is to break out of this range of low profitability, it will need to drive a more significant gap between RASK and CASK. Certainly, any potential bidder for TAP will need to be convinced that this is possible.

If TAP is acquired by another airline with a complementary route network and a strong brand, this could be positive for TAP's RASK and there could also be some opportunity to lower its overhead costs. Acquisition by an airline with an overlapping network would be more likely to lead to a bigger reduction in the cost base through the lowering of capacity, but this may be less attractive to the Portuguese government.

Typically, RASK is dictated by the market and, in the absence of a strategic airline investor bidding for TAP, this is less under the control of management than is CASK.

TAP is a fairly low CASK operator by European FSC standards, but not by comparison with Europe's LCCs and ultra-LCCs, whose share of the Portuguese market continues to grow. TAP will need to step up its efforts to bring unit cost down, regardless of progress with privatisation.

Part 2 of our TAP analysis will examine more closely its network and competitive position and consider its strategic attractions to potential bidders.