North and South American airline shares rose on optimism the airline market is recovering following the release of 1Q2010 results. The gains were despite a flat Dow on news the US economy slowed more than expected in 2Q2010. Oil prices gained 0.8% to USD78.95.

In Latin America, stocks were up, boosted by strong financial results in Brazil. Brazil’s Bovespa (+0.8%) rose for its 10th consecutive session, while Chile’s IPSA (+0.2%) also gained.

TAM Linhas Aereas (+2.4%) rose on news the carrier plans to launch a share sale for its controlling investors, aiming to raise up to USD81 million in new capital. Funds raised from the private placement will be used to buy out TAM Milor Taxi Aereo. If the share sale is not full subscribed, TAM plans to open the sale to other shareholders. The transaction will be handled by Itau Unibanco.

In other TAM news, the carrier signed a firm order for 25 Airbus aircraft – 20 A320-family aircraft and five A350-900s – bringing the Brazilian airline’s total Airbus order book to 176. The order follows the MoU announced at the Berlin Air Show in Jun-2010. TAM’s new A320-family aircraft will replace existing A320s as part of the airline’s commitment to maintain an average fleet age of six years. TAM last week took delivery of its 25th A319-100 aircraft on 28-Jul-2010. The aircraft is powered by V2500 2524-A5 SelectOne engine.

LAN Airlines (+5.0%) was the day’s biggest climber, continuing to benefit from reporting a net profit of USD60.6 million for the three months ended 30-Jun-2010.

The week prior, the carrier announced announced it had reached an agreement with Airbus for the purchase of A320-family aircraft, to be delivered between 2012 and 2016. The order includes A319s, A320s and, for the first time, A321s. The order is valued at approximately USD4.15 million at list prices.

Additionally, LAN’s strategic fleet renewal plan now involves the sale of its 15 A318s between 2011 and 2013. LAN also placed an order with CFM International for CFM56-5B engines to power 70 new Airbus A319/A320/A321 aircraft, for delivery from 2011. This represents the single largest engine order by a Latin American airline. The order is valued at approximately USD2 billion at list prices, including installed and spare engines and an associated maintenance agreement. LAN entered a 12-year rate for flight-hour (RPFH) agreement with CFM.

In other news, Grupo Mexicana de Aviacion stated the financial situation of Mexicana Airlines is critical and options to keep the carrier operating are being assessed. The company will present shareholders with proposals to keep the carrier operating, and has not yet decided whether it will file for bankruptcy. Unions at the carrier stated it has proposed 500 job cuts and reductions in salaries of up to 50%. Air Canada temporarily seized two of the aircraft it leases to the carrier, following a “misunderstanding” and reports forwarded to Canadian authorities that Mexicana may file for bankruptcy. All Mexicana’s operations have returned to normal levels following the seizure. 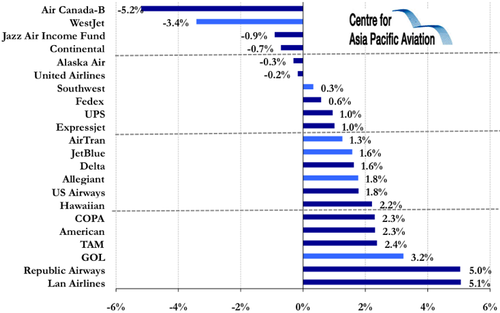