TAM, Continental, UPS on the rise; US carriers fall on fare hike

North and South American carriers’ stocks were mixed on Monday (04-Jan-2010), with the majority of US carriers down as oil prices surged again, rising 2.2% to USD81.51 per barrel. The AMEX Airline Index rose only 0.5% as a result. The Dow meanwhile rose 1.5%.

TAM (+3.1%) made the greatest gain during trading, rising to its highest level in 15 months. The rise came after the carrier announced its dividend payments of BRL0.15627 per share. TAM’s shares ended the day at BRL39.20, after earlier reaching BRL39.39. The Bovespa also gained on Monday, up 2.1% at the end of trading.

Continental Airlines (+1.2%) meanwhile rose after announcing new CEO, Jeffery Smisek, will forgo his USD730,000 annual salary or bonus until the carrier reports a full year profit. Mr Smisek stated the tone of any business is set at the top, and urged staff to “take control of our destiny”.

The carrier reported a loss of USD376 million in the first nine months of 2009. However, Continental is expected to report a profit of approximately USD190 million in 2010, according to a Thomson Reuters poll of analysts.

UPS (+1.4%) was also up after analysts at Robert W Baird & Co upgraded its outlook of the freight carier from ‘Neutral’ to ‘Outperform’ and increased its price target to USD70. The analysts cited improved weight per shipment, increased volume of international shipments, improved pricing and cost reductions as reasons behind the upgrade. 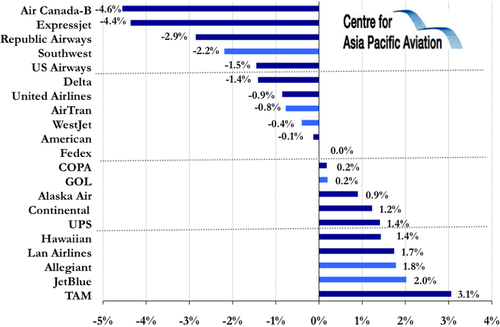