Talks ended between US Airways and United Airlines, but United-Continental link stalls on pricing

US Airways ended talks with United on a possible merger between the two carriers, said Chair and CEO Doug Parker in a company statement.

“We have recently held discussions with United Airlines regarding a possible combination between our two airlines. After an extensive review and careful consideration, our Board of Directors has decided to discontinue those discussions,” he said. “While it is our policy not to comment on rumours concerning strategic transactions, because of the persistent rumours about a possible transaction with United Airlines, we believe it is appropriate to clarify the status of those negotiations. In the future, we will continue to follow our policy of not commenting on potential strategic transactions until we have entered into a definitive agreement with respect to a specific transaction.”

JP Morgan Analyst Jamie Baker said in a research note that the defection of US Airways drops the likelihood of a merger between United and Continental to 40% compared to 85% with US Airways still in play.

"It remains our belief that consolidation makes sense in an industry as fragmented as ours,” Parker concluded. “Whether we participate or not, consolidation that leads to a more efficient industry better able to withstand economic volatility, global competition and the cyclical nature of our industry is a positive outcome.

Speculation in the industry questioned United’s interest in US Airways, with many assuming the Phoenix-based carrier was merely a stalking horse used by United to lure Continental into a merger.

Bloomberg reported late last week that Continental and United are weighing a “no-premium, stock-for-stock merger" creating an entity valued at USD6 billion. The organisation also reported that United’s CEO and Chair Glenn Tilton will split his title with Continental CEO Jeff Smisek who would become CEO of the resulting company while Tilton remains chair. The United branding would be retained. It cited people familiar with the negotiations, but added that terms are not complete.

Reports in Monday's New York Times noted however that talks between United and Continental reached an impasse at the weekend over pricing. 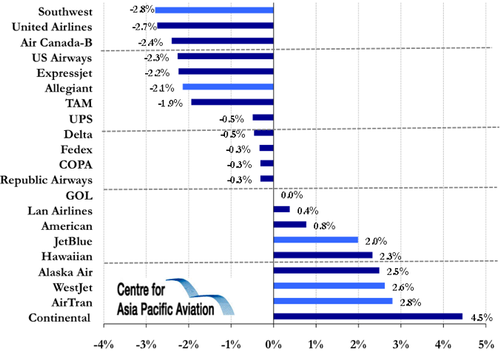