Taiwan further reduces entry barriers for home-grown LCCs – who will be the first to enter?

Positive change continues to occur in Taiwan. A year ago its attitude towards new local entrants was obscure but now it is becoming clear and has fewer obstacles, further illustrated by recent changes that lower the entry barrier for a company that wishes to establish a new airline – such as a low-cost carrier. Majority Taiwanese ownership is required and the Taiwanese company establishing a LCC must be in air or sea transport or trade enterprise, a wide but not unlimited category. A new entrant would not be restricted to the tiny domestic market. The mood is that a home-grown LCC (or two) is now a question of when and who.

AirAsia and Peach could be contenders in addition to LCC subsidiaries of existing Taiwanese airlines. While air service agreements are liberalising, especially in the key Japanese market, it may still be sometime before Taiwan receives its own LCC. Landing fees outside of Taipei are being reduced but there is no definitive plan for a low-cost terminal or other incentives.

LCCs have been a prominent discussion topic over the past year as Taiwan has seen the entry of high-profile LCCs like Peach and Scoot complementing just under a dozen other LCCs. LCC presence in Taiwan is still small with LCCs accounting for under 4% of international seats in the first half of 2013, according to OAG. LCCs gained 0.8% marketshare between 2010 and 2012 but between 2012 and mid-2013 gained 0.7%, indicating growth is accelerating. 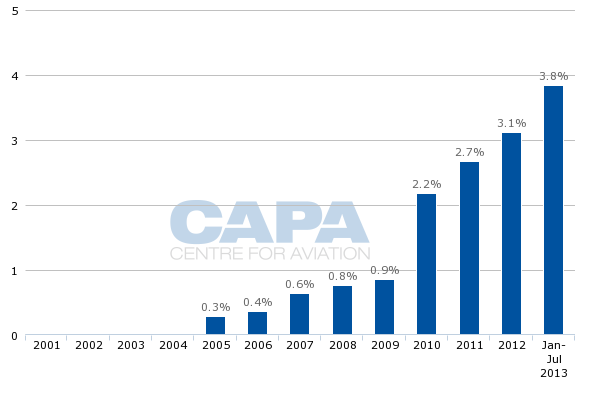 Taiwan is seeing a few trends. It is missing out on growth being captured by foreign LCCs. As foreign LCCs grow, they will challenge the short-haul networks of incumbent Taiwanese carriers, which do not have LCC subsidiaries. Finally, Taiwan is ramping up tourism efforts and is no stranger to the formula of LCCs bringing more traffic that stimulates the economy.

The government is starting to take a pro-LCC view and trying to create measures that will facilitate the introduction of LCCs. While there are still improvements to be made, the operating environment is more favourable now.

AirAsia and Peach could be candidates for Taiwanese JV

A LCC subsidiary from an existing Taiwanese carrier looks most likely to emerge from China Airlines. Local reports indicate China Airlines has established a project group to study the LCC model while EVA Air told CAPA in Jun-2013 it is uninterested in a LCC subsidiary. The major Taiwanese operator TransAsia is interested in the LCC model but has not yet focused its attention on the matter. China Airlines and EVA Air have respective regional subsidiaries Mandarin Airlines and UNI Air, but these are unlikely to be converted to LCCs.

For a joint venture LCC, the AirAsia Group and Japan's Peach Aviation are the obvious targets. Tigerair may also be interested but it is still making important improvements to existing subsidiaries. AirAsia has shown interest in the theoretical opportunities with a Taiwanese AOC but has shied away while regulatory conditions were not favourable. Peach has stated interest in foreign bases. Following AirAsia's withdrawal from Japan, the group has no AOC presence in North Asia, which is a developing LCC market whereas Southeast Asia is maturing.

Competitor Jetstar has a presence in Japan and is trying to launch a Hong Kong unit. There are differences between a Hong Kong and Taiwan operating base, namely Hong Kong having more open access to mainland China while Taiwan has more restricted but higher-yielding access. Costs are significantly lower in Taiwan than Hong Kong. There are also similarities. Both would be good hubs to link North Asia with Southeast Asia, although the AirAsia Group has sister carrier AirAsia X to feed passengers from North Asia to its Kuala Lumpur, and soon Bangkok, base.

Taiwan could also be used to more effectively target the large Taiwan-Japan market. Peach has double daily Osaka Kansai-Taipei Taoyuan services and later in 2013 will introduce a service from Okinawa to Taoyuan. Following the 2012 Taiwan-Japan open skies agreement, capacity has soared. Predicting a saturation point, especially if there are cost-effective vehicles like LCCs, is challenging.

Incumbent carriers have been challenged to effectively serve the market: Japan's full-service carriers have a high cost base while Taiwanese carriers have mainly relied on widebody aircraft, which are too much capacity for service to Japan's many secondary cities. There are narrowbody flights, and China Airlines and EVA Air are looking to acquire more narrowbodies, but the market outside of Tokyo and Osaka is almost entirely leisure-oriented and ideal for LCCs.

A Taiwanese LCC would have significantly lower costs than a Japanese one, so a Taiwanese unit of Peach could theoretically serve Japan more cost effectively, plus have access to new markets like Southeast Asia, which Peach is now trying to open via a hub in Okinawa, closer to Southeast Asia than Osaka Kansai.

Foreign JV possible with certain, but not all, Taiwanese companies

A new Taiwanese airline – full-service or low-cost – must have majority ownership from a Taiwanese company in the air or sea transportation or trade enterprise business. Additionally, the company must have had TWD6 billion (USD200 million) of revenue each year for three proceeding years, a requirement lowered from the previous TWD10 billion (USD333 million) requirement, Taiwan's CAA has told CAPA.

Although this is a broad pool of local suitors, it is not all encompassing. It also limits prospective foreign airlines to partnering with a Taiwanese company of a substantial size that would consequently like to have considerable day-to-day interest in the LCC. This contrasts to JV subsidiaries elsewhere where a foreign carrier finds a silent local shareholder.

The outlook for LCCs at China Airlines and EVA Air is sharply different, with China Airlines receptive. A foreign carrier looking to partner with either of them would need to weigh up the advantage of having a strong local partner and possible strength in a dual-brand strategy versus the potential trade-off of the local carrier not having LCC experience but commanding a lead role in the strategy, as occurred at AirAsia Japan. But the local partner may follow the path of Jetstar Japan, in which local carrier Japan Airlines is typically silent except for route coordination.

While there had been confusion in the past if a new Taiwanese carrier would first have to fly in the domestic market, regulations once the norm in India and South Korea, a new entrant in Taiwan would be free from day one to serve international routes, although the CAA would like to see domestic routes in order to encourage domestic travel. This is a fading market: Taiwan's area is small and some 90% of the population is linked by the high-speed rail on the west coast. Eventual improved rail access on the east coast will further reduce the domestic market. What is left are a number of tiny islands off the coast of Taiwan. But these are too small to attract the attention of a LCC. Most likely a LCC will be entirely international, like China Airlines and EVA Air. 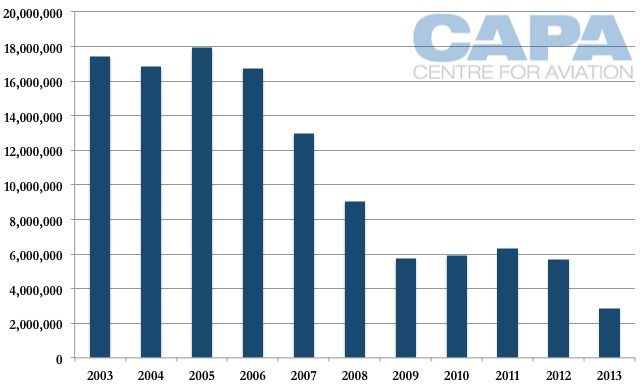 While international access may be granted, there are some restrictions. The lucrative cross-Strait market to mainland China is tightly controlled and competition high for new routes. The CAA awards new flights based on criteria, such as past performance and safety. Outside of mainland China, Taiwan's biggest limitation is with South Korea, a concern born out of Taiwan's concern for Asiana and Korean Air potentially dominating Taiwanese cargo, a huge component of the business at China Airlines and EVA Air. The concern is especially high now with the freight market depressed. Additional services to Hong Kong can be added by mutual agreement between Hong Kong and Taiwan. Matters with the Philippines are currently delicate given a territorial dispute. Southeast Asian markets like Cambodia, Indonesia and Laos are also restricted.

But elsewhere there is liberalisation, including to Malaysia, Japan, Singapore and Thailand – huge markets. Scheduled capacity between Japan and Taiwan is up 37% since 2011, prior to open skies in 2012. 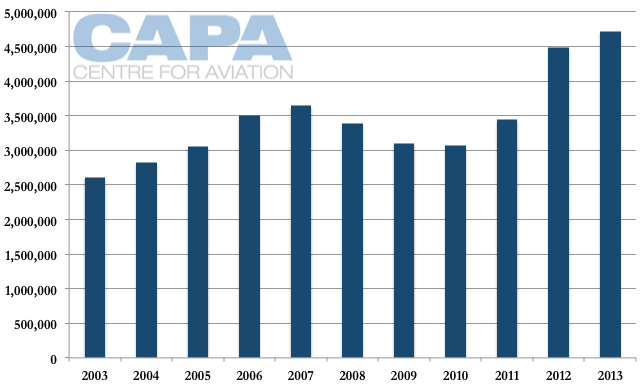 Japan is the largest market from Taiwan after mainland China and Hong Kong. But since a significant portion of Hong Kong capacity is connecting, Japan is Taiwan's second largest point-to-point market. Japan is a solid market for LCCs given its leisure nature. 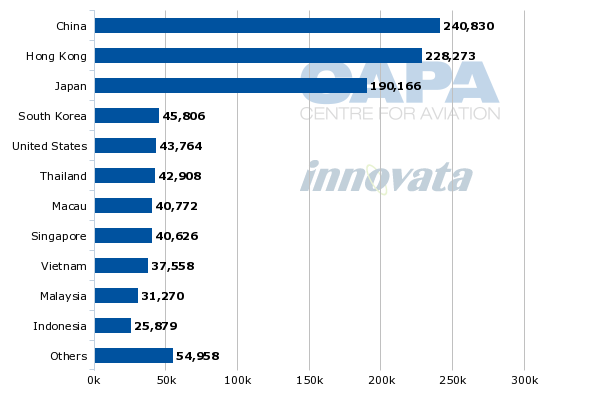 Landing fees outside of Taipei are being reduced, but demand thin

Taipei Taoyuan is the most likely base for LCCs. Some 73% of seats to/from/within Taiwan are at Taoyuan. The next largest airport in terms of market share is Kaohsiung with a 9% share, followed by Taipei Songshan, also with a 9% share. While Songshan is ideal given its convenient downtown location, access is restricted. Kaohsiung's demand is thin with 82% of the airport's capacity being international, with Hong Kong and mainland China accounting for 67% of international seats. 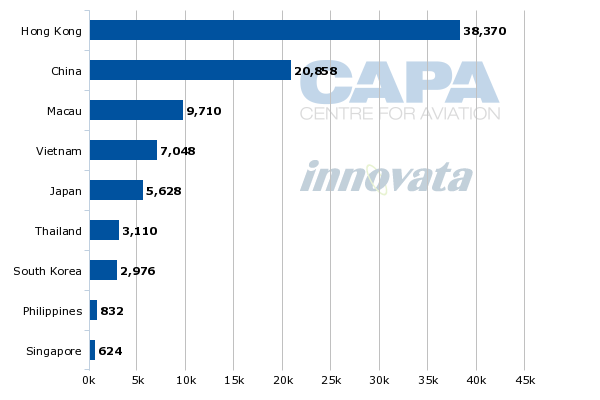 Some items, like low-cost terminals, still a discussion but reception is warm towards LCCs

Taiwan is having an ongoing discussion about how to accommodate LCCs – foreign or home-grown – in terms of terminal space. Whereas the CAA once had a view that a low-cost carrier terminal would not be possible until Taoyuan's terminal three opened sometime around 2018, the CAA has shown a warmer attitude and considered converting a former catering facility into a LCCT that could open prior to 2015.

This is just one area where further liberalisation is needed, but Taiwan has the mindset to welcome LCCs and has already made changes to support its first indigenous LCC. Some more work could be done, but it is refreshing to see a pro-aviation stance by a government. In due course, Taiwan will be rewarded.

Taiwan will be a discussion topic at CAPA's second annual LCCs and New Age Airlines in North Asia Summit to be held in Seoul, 4/5 September. It is proudly hosted by Incheon International Airport Corporation and supported by Travelport, SITA, Sabre and Bombardier. Click here for full details.